15 steps to a more effective UN 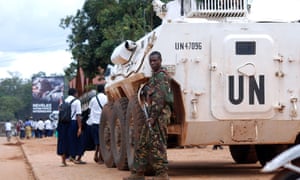 Work for people, not governments: We need to move away from the state-centric model of international governance towards a citizen-oriented model. Radical new forms of representation should be explored, such as citizens’ panels.

Use technology to increase connectivity and transparency: New media, including mobile and social media, could help demystify international institutions and encourage participation. Alongside this, there could be more regular interactions by the leadership of intergovernmental organisations with civil society and the media, and the creation of accessible databases of statistical and other information on their work.

Take surveys: Join the biggest ever open/transparent survey called UN My World Survey 2015 which, through creative online and offline methods, allows people across the world to tell the United Nations the most important issues they would like the post-2015 agenda to address.

Another one is the World We Want 2015, which enables people to engage, visualise and analyse people’s voices on sustainable development.

Use post-2015 as an opportunity for reform: In the drawn-out discussions on a post-2015 UN development agenda, the focus is on “the world we want,” but not yet on “the UN we want”. The current UN development system is far from having the operational mechanisms that the world needs.

Start a PR campaign: The UN could do more to promote itself. It is vital people see the real work the UN is doing, beyond the power struggles within the security council.

Carry out an audit: As with any organisation, the UN could use some audits and reviews of its structure, administration and in particular the terms of employment for desk jobs. But for most of it, these are very hard-working people, doing everything they can in difficult circumstances, with enormous help from UN Volunteers.

Include all countries: There needs to be more African representation sitting at the table. I was just doing some research the other day and I found a list of youth delegates at the UN and my country [Democratic Republic of Congo] was not listed. Where is the balance? Where is the diversity?

Balance the power: On the UN security council, it is necessary to find a more balanced regional representation. But we need to avoid increasing the number of members too much. The risk is we end up with a very indecisive council, even more than now.

De-centralise the structure: The UN cannot ask the field to integrate more until the headquarters integrate. Ideally, I would be in favor of merging the department of political affairs with the department of peacekeeping operations. Country desks should be integrated too. For example, those who work on Haiti should all be part of the same team and respond to the same boss.

Show leadership on human rights: The current picture on human rights is deeply worrying. There is an erosion of commitment to these most sacrosanct of UN norms. There are only two ways forward on this: either we have to go through another period of darkness to rediscover their essential necessity or we will see some real leadership emerge capable of rebuilding resolve. In this regard we should expect more from leaders of the large democracies.

Reform financing: The UN is there to deliver global public goods. The future financing of the UN should reflect this. We need a system where all countries contribute, according to their capabilities and responsibilities, based on specific criteria that reflect levels of economic development and population. It is ridiculous that a handful of small countries in northern Europe continue to bankroll the UN (or a large share of it) on behalf of the rest of the world.

Allocate more resources to human rights: There needs to be more resources put into the Office of the High Commission for Human Rights (OHCHR) because they are very stretched thin now. The OHCHR needs to be empowered with support from the secretary general, and have the tools to respond to rights crises as they occur.

Vary the veto: The big issue at the UN security council is not the number of members, it’s that the five permanent members still have the veto. It’s the veto authority that needs to be either reformed or done away with. Perhaps if there was a larger group of permanent members, and the veto requirement was not just one member vetoing, but say three members vetoing? The key is that one or two states should not be able to stop urgent actions in a place like Syria.

Cut costs, foster creativity: The UN should focus on cutting expenses through technology and innovation, heightening transparency so that the public knows the great work they have been doing. It should also connect people across borders to spur creative and unique ideas to solve the challenges that our planet face today.

Read the rest of the discussion on the live Q&A here.

Read more stories like this: • Fighting for change: better from the boardroom or the street? • How the UN should revolutionise its data • Human Development Report 2014: findings explained