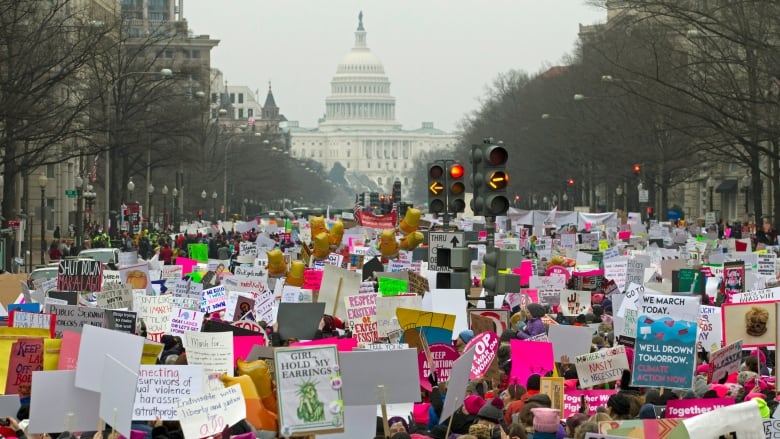 The Women's March returned to Washington on Saturday and found itself coping with an ideological split and an abbreviated route due to the government shutdown, as well as adverse weather conditions.

The original march in 2017, the day after U.S. President Donald Trump's inauguration, drew hundreds of thousands of people. The exact size of the turnout remains subject to a politically charged debate, but it's generally regarded as the largest Washington protest since the Vietnam era.

Organizers this year submitted a permit application estimating that up to 500,000 people would participate, but the actual turnout was expected to be far lower. Parallel marches were planned in dozens of U.S. cities, Canada and around the world.

'My feminism is weatherproof,' marchers say at 3rd annual Winnipeg Women's March'We will not go back': Hundreds of women brave cold and snow to march in Toronto

The original plan called for participants to gather on the National Mall. But with the forecast calling for snow and freezing rain and the National Park Service no longer plowing the snow, organizers changed the march's location and route to start at Freedom Plaza, a few blocks from the White House, and head down Pennsylvania Avenue past the Trump International Hotel.

In Toronto, hundreds of women gathered downtown despite cold and snow, in solidarity with the Washington march and to protest the provincial government.

Organizers said the event is chance to demonstrate to the Doug Ford government that women do not want to return to the days when women enjoyed fewer rights than they do now.

"The theme of our march is: We will not go back," organizer Bianca Spence said before the rally began on Saturday. 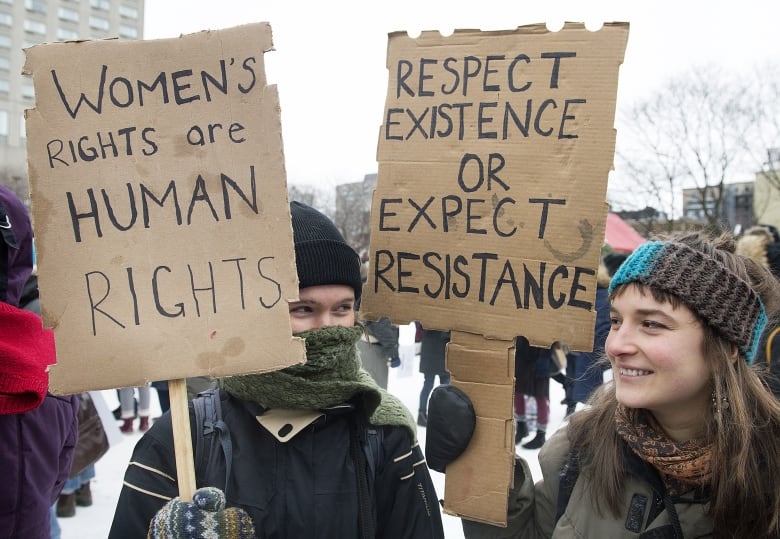 People hold up signs during the Women's March in Montreal on Saturday. (Graham Hughes/Canadian Press)

In Winnipeg, dozens of people gathered at the front steps of the Manitoba Legislature.

The march in Winnipeg will emphasize the importance of inclusivity, said organizer Hillary Dux.

Another major theme is violence against women, represented by wearing red scarves — an idea suggested by the Native Women's Association of Canada to highlight the issue of violence against Indigenous women and girls, Dux said.

"I see the violence that happens to our trans women," said Charlotte Nolin, a trans two-spirit woman.

"We're not going to go away and we're not asking for any special favours."

In Montreal, dozens braved glacial temperatures that dipped below -22 C to hold a rally in a downtown park.

Jumping and stomping their feet to keep warm, they waved an assortment of handmade signs demanding justice for missing and murdered Indigenous women, an end to sexual harassment and abuse and basic gender equality.

About 50 people showed up to a march in Sandy Cove, N.S. — a big leap from the 15 people who turned up at the first march, which drew international attention. 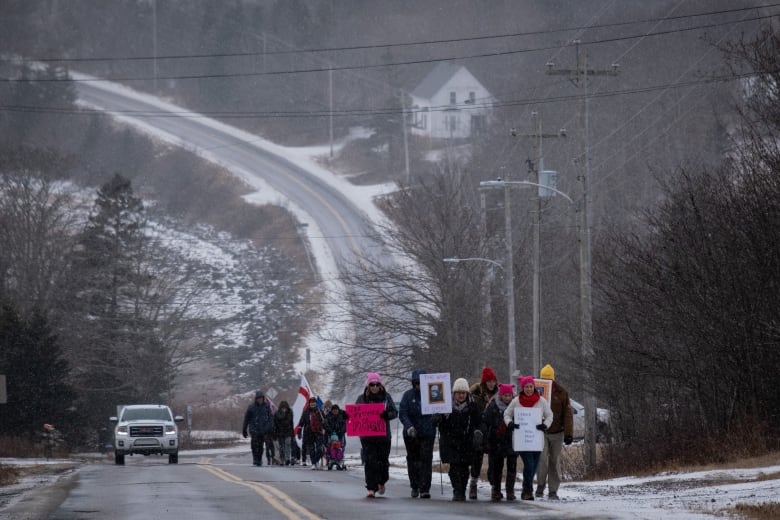 While Sandy Cove, N.S., only has a population of around 68 permanent residents, about 50 people showed up to a march there on Saturday. (The Canadian Press)

"In terms of the achievements of women's rights and equality, and ending violence against women, we haven't gotten there yet," said Gwen Wilson, one of the organizers.

While Sandy Cove, located about halfway down the Digby Neck peninsula, only has a population of around 68 permanent residents, Wilson said community members are still passionate about issues that affect women worldwide.

"We're a small, isolated community, but that doesn't mean we're not aware of things going on around the world, and that also doesn't mean that there are people in our own community who could be our neighbours, who aren't in need of help," she said.

This Women's March in Washington has also been roiled by an intense ideological debate.

In November, Teresa Shook, one of the movement's founders, publicly accused the four main leaders of the national march organization of anti-Semitism.

This accusation was targeted specifically at two primary leaders: Linda Sarsour, a Palestinian-American with a long history of criticizing Israeli policy, and Tamika Mallory, who has maintained a longstanding association with Nation of Islam leader Louis Farrakhan.

Shook, a retired attorney from Hawaii, has been credited with sparking the entire movement by creating a Facebook event that went viral and snowballed into the massive Jan. 21, 2017, protest. In a Facebook post, she claimed Sarsour and Mallory, along with fellow organizers Bob Bland and Carmen Perez, had "steered the Movement away from its true course" and called for all four to step down.

The four march organizers have denied the charge, but Sarsour has publicly expressed regret that they were not "faster and clearer in helping people understand our values."

Despite pleas for unity, an alternative women's march has sprung up in protest and will be holding a parallel rally in New York on Saturday a few blocks away from the official New York Women's March protest.

With files from CBC News and The Canadian Press