A tragedy that was long in the making

A tragedy that was long in the making 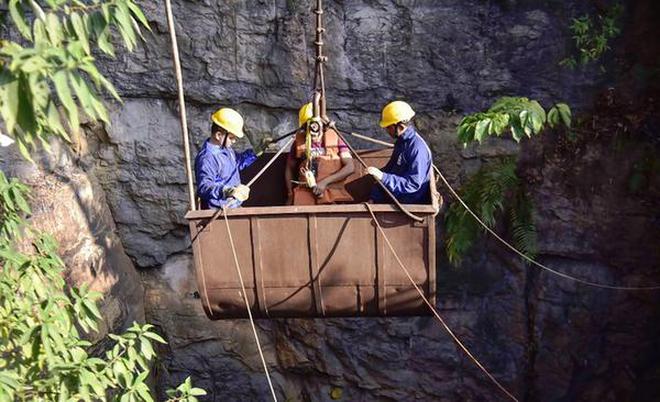 The efforts to reach the 15 miners trapped in an illegal coal mine in the East Jaintia hills of Meghalaya since December 13 continue, but they began belatedly and have faced many problems.

Doomed from the beginning

First, the Meghalaya government has no idea what happens inside these rat-hole mines, which are barely 2 ft wide, since mining is a private activity. Despite the National Green Tribunal ban of April 2014, mining continues in the State. Second, it was unfortunate that the district administration assumed the miners to be dead on the very day of the tragedy. This assumption was evident in the letter written to the National Disaster Response Force. It was only after a Delhi-based lawyer, Aditya N. Prasad, represented by senior Supreme Court advocate Anand Grover and his team of human rights lawyers presented their suggestions to the court that the Meghalaya government got different actors to the accident site. Mr. Prasad has never visited Meghalaya. When asked why he is the petitioner on behalf of the miners, he simply said: “They are fellow Indians and my brethren.” That someone based in Delhi should have the empathy lacking in the people and the government shows that humanity is a dying virtue.

Mr. Prasad has done everything possible to put things together to assist the rescue mission. But despite his initiative, things were delayed. The distance of the mine, for one, was a major hindrance. Then there are other issues that need to be highlighted. The trapped miners were being racially profiled in the minds of the people and the state. Of the 15 miners, only three were locals from the nearby village of Lumthari. The rest were Muslims from Garo Hills, Meghalaya, and Bodoland, Assam. Their socio-economic profile also worked against them. They were the poorest of the poor who took a huge risk to enter a mine and dig for coal without any safety gear.

When a mine is flooded, the immediate response, apart from pumping out the water, is to stop further flow of water into it. This requires a hydrologist to scientifically map out the area from where water entered the mine. Sudhir Kumar, a hydrologist from the National Institute of Hydrology, Roorkee, arrived only two weeks after the disaster. So did the divers from the Indian Navy and the 100 HP water pumps from Kirloskar Brothers. The remotely operated underwater vehicle (ROV) from Planys in Chennai came three weeks later. So did the geologists from Hyderabad. All these delays happened because there was no one person or agency to coordinate the rescue mission. This shows the kind of disaster preparedness we have in our country. One shudders to think what the response would be if there was a massive earthquake in the Northeast, which is listed as Zone 5 on the seismic scale.

There are many questions that arise with respect to rat-hole mining of coal. One, why does the state allow this archaic mining system, which has complete disregard for human life and safety? And two, why is Meghalaya exempted from national mining laws? Rat-hole mining, which started with gusto in the 1980s, has poisoned three rivers in the Jaintia hills: the Myntdu, Lunar and Lukha. Scientists from the North-Eastern Hill University have found that these rivers have very high acidic levels. Reports from other agencies suggest that pH of the water and sulphate and iron concentrations indicate significant deterioration of the rivers. Acid mine drainage from abandoned mines was a major cause for water pollution in the areas investigated, the reports added.

The coal mine owners have been hiring the best legal brains to argue for them in the highest court of the land. They say that rat-hole mining should continue because no other form of mining is viable (which means that their profit margins would reduce if other forms of mining were to take place). They argue that the NGT ban should be lifted. They claim that coal mining provides livelihoods for many, but at what cost?

The tribes of Meghalaya are divided on the issue of rat-hole mining. The fault-lines are clear. Those who care for the environment and for a future for their children and grandchildren have been clamouring for an end to the practice of rat-hole mining and reckless limestone mining. On the other hand, the mining elite have mobilised forces to demonise environmental activists. A community of just over a million is now fragmented. To add to these woes, cement companies also release their effluents into the rivers. So we now have a deadly cocktail of pollutants being released into the environment. The scale of the problem is clear in this one fact: there are 3,923 coal mines in one district with a geographical area of 2126 sq. km.

Meghalaya tragedy: one month on, no concrete results

The other troubling factor is that coal mine owners are insisting that since Meghalaya is a State under the Sixth Schedule of the Constitution, national mining laws should be exempted here. The Sixth Schedule was enacted to protect the community rights of tribals from any form of exploitation of their land and resources. How can it now be used as an instrument to protect an activity that is a private enterprise, that is inhuman, and that violates Article 21 of the Constitution? Why is the Sixth Schedule unable to protect the forests and rivers that are common property resources? Acid mine drainage has rendered even agricultural land non-productive. Mine owners do not care about environmental degradation.

The cement giant, Lafarge, mines limestone from Meghalaya’s East Khasi Hills district and transports it to Chhatak in Bangladesh via conveyor belts. The Supreme Court placed a heavy penalty on Lafarge and asked it to strictly implement environmental laws apart from generating livelihoods for people residing within 50 km of the mining areas. In the case of coal mine owners, there are no such strictures. They have left thousands of abandoned mines as human graves. The State does not insist that they reclaim and afforest those mines. In 40 years of mining and profiteering, the mine owners have till date not constructed a single hospital or even a school. There is complete disregard for corporate social responsibility because the mines are privately owned by the tribals. How long can the Central government and the highest court of the land allow this to carry on in one part of the country when strict laws are applied elsewhere?