Thousands turned up to protest after city mayor announced presidential hopeful will not be allowed to hold rally. 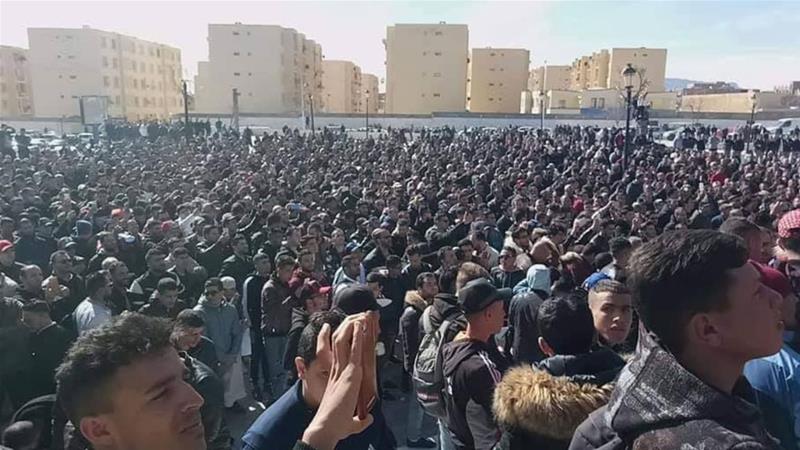 An impromptu protest broke out in northeastern Algeria on Tuesday after local authorities sought to prevent an opposition candidate from holding a rally as the north African country prepares to hold a presidential vote in two months.

Kamel Hachouf, the mayor of Khenchela - located some 500km southeast of capital Algiers - and member of President Abdelaziz Bouteflika's ruling National Liberation Front (FLN), drew the ire of local residents after he said he would bar presidential hopeful Rachid Nekkaz from meeting his supporters outside the town hall.

"I support President Abdelaziz Bouteflika's candidacy for a fifth term in office," wrote Hachouf a day earlier. "Whoever thinks they're man [enough] can come to the APC tomorrow [town hall]."

A businessman-turned-politician, Nekkaz rose to prominence after pledging to pay the fines of women who break the "niqab" (veil) ban in France and Denmark.

The visit to the town hall would have allowed the 47-year-old to certify that he had secured the backing of the local population.

Under Algerian law, a presidential hopeful must gather at least 60,000 signatures in 25 of the country's 48 provinces to compete in the election.

An unnamed source from the ruling FLN told news website TSA that Hachouf had purposefully closed the town hall to prevent people from signing in favour of Nekkaz.

"He defied the population," the source said. "The crowd assembled in front of the town hall, forcing police to intervene and open [the building]."

Videos posted on social media showed thousands of protesters gathered outside the town hall, calling for a huge poster of the president to be taken down.

"Remove the photo, leave the flag," they chanted before an unidentified individual took down the poster. According to TSA, the mayor has been suspended.

Activists have staged protests elsewhere in Algeria against Bouteflika's bid for re-election,  prompting the interior minister to warn that authorities will not allow the vote to be sabotaged.

Severely ill and wheelchair-bound since suffering a stroke in 2013, Bouteflika has not addressed the nation in more than seven years.

Algeria's diverse political opposition is meeting on Wednesday to try and secure a joint candidate to face incumbent Bouteflika in the April 18 presidential election.