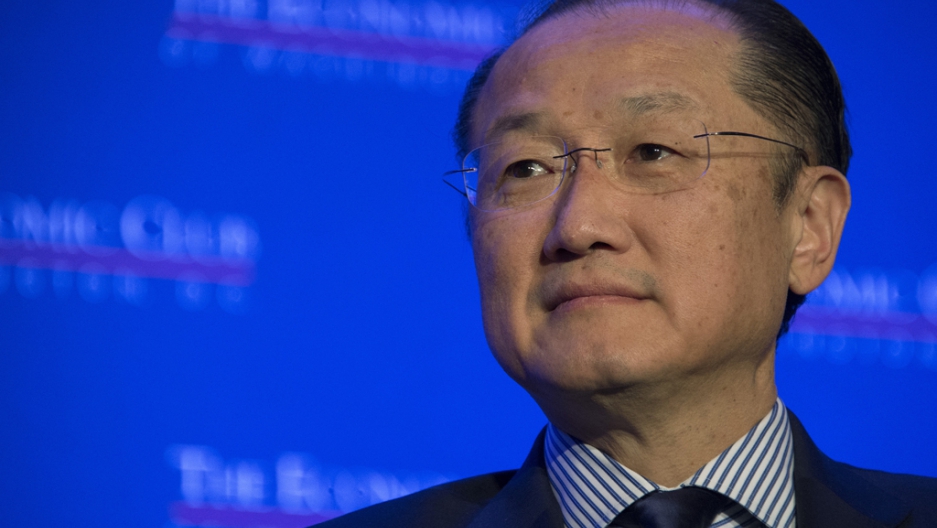 TIRANA, Albania — World Bank President Jim Yong Kim has set some very ambitious, specific goals for his institution: He aims to promote income growth among the bottom 40 percent of the world's population and reduce extreme poverty to 3 percent by 2030.

To achieve that, he’s expanding the role of the bank’s private-sector arm, the International Finance Corporation, or IFC, as set out in a new long-term strategy approved in October.

The private sector has a key role in the fight to end extreme poverty, Kim argues.

“If we engage responsibly with the private sector, to leverage their investment and talent, we can create far more good jobs for the poor,” he wrote in a recent blog.

That’s part of a longer trend: The IFC has grown exponentially since 2005 and now accounts for 42 percent of the World Bank’s annual portfolio.

However, critics say that not all the IFC’s funded projects are meant to fight poverty, that the financial institution has a poor track record on how it applies environmental and social standards, and that it’s shown resistance to calls for accountability.

Although activists have welcomed the bank’s strategic goal to fight extreme poverty, they question whether enough is being done to force the IFC to focus on it.

Among the projects the IFC financed in 2008 was a cement plant belonging to the Greek Titan group, near the village of Borizan in central Albania.

The local subsidiary, Antea Cement, received $26.3 million in loans and $12.6 million in equity from the IFC, which argued that the project would boost employment while observing social and environmental safeguards.

However, pollution readings by Albania’s Institute of Health in the formerly rural and pristine area around the plant now show levels of dust and other particulate matter (also known as pm-10) in the air are up to double the legal limit.

The amounts of sulfur dioxide and nitrogen dioxide are significantly larger that in most urban areas, though they still fall within official limits.

“This was an environmentally pristine village and we never had problems with pollution,” says Genc Labi, a lawyer with the local pressure group For the Defense of Life and the Ecosystem.

Since the plant was built four years ago, Labi says, the agricultural output in the area has dropped significantly, while health problems associated with pollution are increasing.

“Many people are complaining of respiratory problems and allergies,” he adds. “Those most affected from the pollution want to leave but don’t have the money to transfer elsewhere.”

The cement plant in Albania isn’t the only controversial IFC investment. Emblematic cases in recent years include funding for luxury hotels in Ghana, Guinea and Haiti.

Last month, the IFC board approved a $14.7-million loan for a Greek company to make long-shelf-life croissants and flavored cream for sale in Turkish supermarkets.

This month, the board was set to approve a $4-million equity investment to produce a digital TV guide in India.

Experts are questioning the ultimate value of such projects.

“These might be good and profitable investments,” says Peter Chowla, coordinator for the Breton Woods Project, a London-based watchdog group. “But they’re wasting development money.”

At the same time, Chowla adds, there’s considerable dissatisfaction in the development community about how the IFC’s environmental and social standards are being applied, together with the accountability of the financial intermediaries it funds, which account for 50 percent of its budget.

“When the IFC lends to banks or equity funds, which then lend or invest on to other projects,” he says, “there’s no way to know whether they’re meeting the principal of ‘do no harm.’”

More from GlobalPost: Human rights: Is the EU failing one of its main missions?

However, the main concern is over the IFC’s culture of resistance to accountability, Chowla says. He points to controversy surrounding the bank’s support for a coal-fired power plant in Gujarat, India.

The World Bank issued a $450-million loan for the project despite a damning report from its own Compliance Advisor Ombudsman (CAO), which found serious lapses in the IFC’s processes and decision-making. The report also validated the complaints of local fishing communities, which have been struggling to deal with severe health effects and loss of livelihoods due to the project.

Although the report is the product of its own accountability mechanism, the IFC — with support from World Bank President Kim — chose to ignore it.

Responding in a statement the World Bank confirmed that the role of the IFC will be expanded, saying it would maintain a clear commitment to social and environmental sustainability.

But in an open letter to Kim last September, 68 civil society organizations from 28 countries warned that the IFC’s decision to disregard the CAO’s advice “undermined its mandate” and “avoided culpability.”

Nevertheless, Chowla says, such investments are only set to increase right along with the size of the IFC.

Editor's note: This article has been changed from the original version to include a statement from the World Bank that was accidentally omitted because of an editing error. The headline has also been changed and a link included to an article by the Bretton Woods Project to address concerns about similarity. GlobalPost apologizes for its editorial mistakes.