Most of the extinctions were caused by deforestation in South America, a new study of endangered birds shows

Spix’s macaw, a brilliant blue species of Brazilian parrot that starred in the children’s animation Rio, has become extinct this century, according to a new assessment of endangered birds.

The macaw is one of eight species, including the poo-uli, the Pernambuco pygmy-owl and the cryptic treehunter, that can be added to the growing list of confirmed or highly likely extinctions, according to a new statistical analysis by BirdLife International.

Historically, most bird extinctions have been small-island species vulnerable to hunting or invasive species but five of these new extinctions have occurred in South America and are attributed by scientists to deforestation.

“People think of extinctions and think of the dodo but our analysis shows that extinctions are continuing and accelerating today,” he said. “Historically 90% of bird extinctions have been small populations on remote islands. Our evidence shows there is a growing wave of extinctions washing over the continent driven by habitat loss from unsustainable agriculture, drainage and logging.”

More than 26,000 of the world’s species are now threatened, according to the latest “red list” assessment, with scientists warning that humans are driving a sixth great extinction event.

Four of the eight newly identified bird extinctions took place in Brazil, once home to Spix’s macaw. The attractive parrot was caged and traded for 150 years before any wild populations were discovered but in 1985, three birds were found in a Brazilian forest. Two were illegally captured for the pet trade, and attempts to breed the final male were unsuccessful. A 2016 sighting in the wild is now thought to have been an escaped caged bird, leaving the last known sighting in 2000. 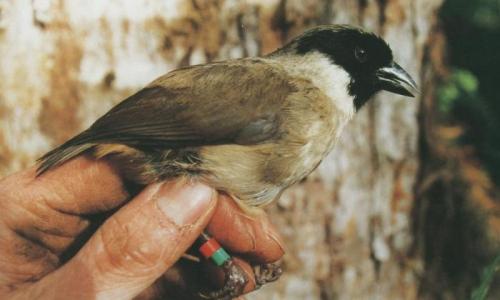 While captive populations of Spix’s macaw are being bred for reintroduction into restored woodland habitat there is no second chance for the poo-uli, the cryptic treehunter and the Alagoas foliage-gleaner: they have disappeared from the skies forever.

According to the new analysis, published in Biological Conservation, the Alagoas foliage-gleaner, a small gingery forest bird which picks invertebrates from leaves, became extinct in 2011, disappearing from a heavily logged patch of Brazil.

The cryptic treehunter was only discovered in two patches of forest of Murici in north-eastern Brazil in 2002 but has not been seen since 2007 after these small forests were felled and replaced with sugar cane plantations and pasture.

The poo-uli, or black-faced honeycreeper, was found on the island of Maui in Hawaii but was last sighted in 2004. Attempts to breed the bird in captivity failed.

The study by BirdLife International assessed 51 species judged “critically endangered” on the International Union for the Conservation of Nature’s (IUCN) red list using a new statistical method to analyse and assess search efforts and the validity of sightings of species on the brink of extinction.

It found just one species that was less endangered than feared, and recommended removing the “possibly extinct” classification from the Moorea reed warbler of New Caledonia. Of the eight species to be reclassified as extinct, four are “critically endangered (possibly extinct)”.

They include the glaucous macaw, once found in Argentina, Uruguay and Brazil before the clearing of its palm grove habitat for farming saw it dwindle to one population in Paraguay. Another is the Pernambuco pygmy-owl, a 15cm-tall owl that eats insects and hasn’t been seen in the Brazilian state of Pernambuco since 2002, with much of its habitat destroyed by illegal logging.

Accurate assessments of the moment of extinction are difficult to make with many elusive species but according to Butchart, the “possibly extinct” classification is an extremely cautious judgment which almost certainly means that the species has vanished.

Butchart said it was important not to prematurely declare a bird extinct because abandoning conservation efforts could hasten its demise but accurate assessments of extinction were vital for efficient conservation work. “We’ve got limited conservation resources so we need to spend these wisely and effectively. If some of these species have gone we need to redirect these resources to those that remain.”

“Obviously it’s too late to help some of these iconic species but because we know birds better than any other taxonomic class we know which other species are most at risk. We hope this study will inspire a redoubling of efforts to prevent other extinctions.”

… we’ve got a small favour to ask. More people are reading the Guardian than ever but advertising revenues across the media are falling fast. And unlike many news organisations, we haven’t put up a paywall – we want to keep our journalism as open as we can. So you can see why we need to ask for your help. The Guardian’s independent, investigative journalism takes a lot of time, money and hard work to produce. But we do it because we believe our perspective matters – because it might well be your perspective, too.

"You’re one of the few voices left that makes sense. Your articles, ethos and dedication gives me hope – keep it up and we’ll be here, helping as we can" Fay, UK

If everyone who reads our reporting, who likes it, helps to support it, our future would be much more secure. For as little as £5.99 per month you can support the Guardian - and it only takes a minute. Thank you.