Feminism is the greatest revolution of the 21st century: Yuval Noah Harari 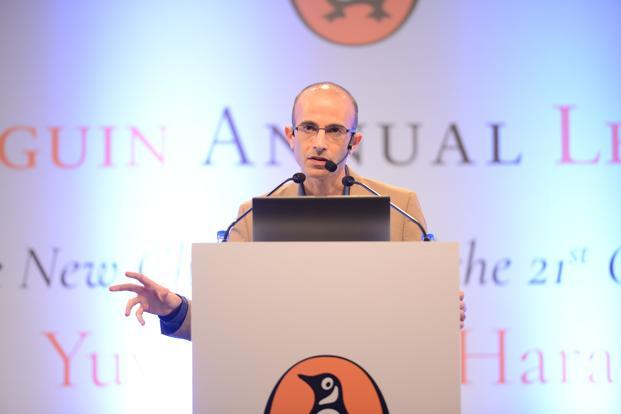 Feminism is the greatest revolution of the 21st century,” he says to a roomful of journalists. Is it any wonder that Yuval Noah Harari is a popular man?

On 16 December, I was part of a media roundtable for regional language journalists meeting with the Israeli historian and best-selling author (Mint is not going regional. I have learnt from the PR industry that being persistent works miracles). After being published in more than 40 languages across the world, Harari has now been published in Marathi. That evening, Harari delivered the Penguin Annual Lecture in Mumbai.

Knowing that this was to be a relatively intimate gathering, I had a long list of questions; questions that might appear more befitting for an oracle than a historian. “What is next in surveillance technology?”, “Will the future be vegan?”, “Will binary genders cease to exist?”, “What is the future of beauty, now that it doesn’t serve a biological purpose?”

Most of his work is synthesis, Harari clarifies at the outset. “It’s taking very well-known facts and developments and putting them together in a way that makes us see the past, present and future with a new perspective,” he says. The perspective is key, as readers of his first two books Sapiens and Homo Deus would know (his third book is a safe skip). Harari makes history sexy. He had to. It was a survival tactic. A specialist in medieval history, he was a junior professor at Jerusalem’s Hebrew University when a boring course on “Introduction to History” came his way because no one else wanted to teach it. He was studying the material two steps ahead of his students—the beginning of agriculture, the invention of money. Sapiens was born out of the reaction of his students, who made him realize how eager young people were to understand history. “It is the only way to understand the present and the future,” the professor says.

Like grasping gender relations, for example. “The way we understand relationships between men and women today are shaped to some extent by these developments thousands of years ago. If you want to understand why in most human societies even today women have a lower position than men economically, politically and legally… it’s not enough just to rely on nature or biology. Historical processes play a major role.

“Probably the greatest political and social revolution of the last century is the feminist revolution,” he adds. “It altered the dynamics between men and women which hadn’t changed for thousands of years… and the amazing thing about it was that very few people were killed. In contrast, think of how many people were killed during the Russian Revolution or the Partition of India and what those events ultimately changed. The feminist revolution is an example that we can have tremendous change without violence.”

Wheat has cultivated us. More people die of sugar than gunpowder today. The contradiction of oxytocin. The myth of a golden period in history. The ethics of a self-driving car. The importance of human stupidity in shaping history: An exchange with Harari is a thrilling, non-linear ride. It is also mildly frightening: the possibility of religious fanatics modifying human sexuality; totalitarian governments embedding biometric sensors in subjects; the rise of the “useless class”. The producers of Black Mirror better be paying Harari royalties.

Novelists should love Harari. The most important argument of his first book, and the underlying argument of his other two, is that humans control the world because they can invent fictional stories and believe in them collectively. This helps them cooperate for missions bigger than, say, acquiring bananas. It is not because they are intelligent or rational. Money is the biggest fiction, it is a story everyone believes in—there are exceptions, like the Andamanese featured on the cover of Lounge this week. “Also football. How can all the nations gather in Russia to play the World Cup if they don’t believe in the collective fiction of football rules?” he says, flashing a rare smile.

The idea of believing in stories collectively is more important now than ever, cautions Harari. With advanced biotechnology and progress in future reality research, if we do not agree on a single narrative, things are bound to go in any direction. If we don’t all agree, for instance, that gene-editing a baby is unethical. “We are now acquiring abilities to change fundamental aspects of our objective reality that was not possible before,” he says.

Harari is being generous. In the American linguist Charles F. Hockett’s “design features”—a mid-20th century 16-point-guide to what makes human communication unique—a crucial differentiator is that humans are capable of prevarication. In other words, we can lie and deceive. That’s what makes us special. But we could call ourselves storytellers and feel better.