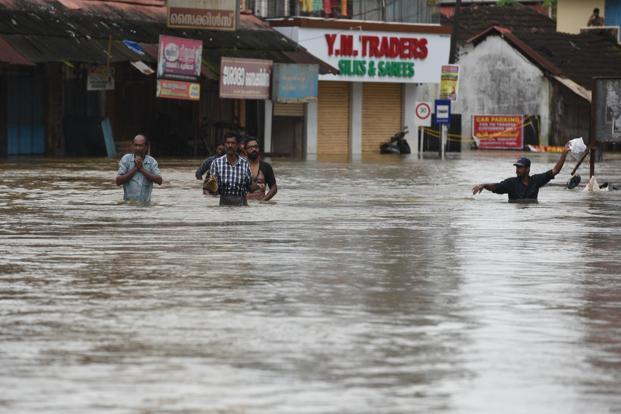 The real cost of floods across Kerala in August may never be really known. Hundreds dead, thousands displaced, millions lost. The scale of damage from any natural disaster can never really be measured because of the long-term ecological and psychological effects. The spread of diseases, such as cholera, malaria, and leptospirosis, may impact flood-hit communities beyond the crisis for years to come.

We react every time there is a disaster. We band together and raise funds, help victims and volunteer time to clean up and rebuild.

The task before us is to move from a reactive stance to proactively preparing for such natural disasters. The fact that more people are moving into more densely populated cities and towns only means that the impact of a similar-scale event 20 years ago would have caused much less damage than it would do today. India faces numerous such perils and needs to be better prepared.

In 2017, Swiss Re counted 183 natural catastrophes and 118 man-made disasters across the globe. India alone is projected to have seven megacities—defined by a population of more than 10 million—by 2030, the World Economic Forum said last year. This confluence of climate change, natural disasters, and human density could lead to more Kerala-like images.

Governments and insurers pushing for solutions can model, prepare and transfer risk to insurance markets. The end goal: Rebuild societies in the event of any natural catastrophe and to minimize any long-term impact by reducing the gap between economic losses and available funding, known as the protection gap.

The cost of recovery and reconstruction in Kerala has been put at ₹31,000 crore, according to a UN report in October. The annual allocation by both state and central authorities to Kerala’s disaster relief fund is a mere ₹214 crore, the government said in August.

While there may be additional funds from the central government’s National Disaster Response Fund, this isn’t a guarantee and the amount can be contentious depending on negotiations between the state and centre. Then, there are commercial and private insurance claims, but the current estimate is believed to be no more than ₹2,500 crore.

That means, in this scenario, the protection gap is upwards of ₹25,000 crore. This shortfall—and how Kerala and its citizens recover—will fall on the shoulders of the state government. This situation will not be unique to Kerala and neither will it be the last time that this happens.

The GST Council has now been asked to examine the feasibility of a disaster levy to finance disaster-related reconstruction. This will not be easy. States will need to agree on a common rate, as well as the goods and services that will bear the proposed levy. We don’t believe a state levy will sufficiently incentivize states to improve their disaster risk management.

One solution is to transfer disaster risks over to the insurers or reinsurers. Immediate payouts are made through parametric solutions based on the amount of rainfall or the intensity of a drought, for example.

The benefit to governments would be transparency over funding; the benefit to citizens is almost immediate payouts; the benefit to everyone affected would be food, clothes, medicines and temporary shelter without having to appeal for funds.

Is this too far-fetched? Can this be done in India? There are numerous examples for Kerala—and India—to follow. For example, America’s National Flood Insurance Program, the Caribbean’s 16-country hurricane, earthquake and rainfall risk insurance fund and Mexico’s FONDEN programme, which is a comprehensive disaster-risk financing strategy comprising reserve funding, reinsurance and catastrophe bonds.

Closer to home, China’s provincial Guangdong and Heilongjiang governments have purchased insurance against natural disasters as a means of fiscal budget protection—the idea being that a disaster will hit multiple areas of a budget beyond the core. Several of these programmes have responded with timely payouts following recent natural disasters.

There is another compelling reason. Ratings agencies are increasingly looking at the impact of natural disasters on the financial health of a government. Both S&P and Moody’s said that mitigating the financial impact of natural disasters will improve the credit rating of a government. This is especially relevant in India’s developing environment of competitive federalism, where state governments are expected to rely less on federal assistance, especially when it comes to funding post-disaster reconstruction.

A peculiarity of India’s disaster relief mechanism is the focus on immediate relief and rehabilitation, and the secondary focus on the restoration and rebuilding of infrastructure. Again, insurance purchased on the government account will serve to plug this gap in reconstruction financing.

One immediate measure to encourage states to adopt risk financing tools would be an enabling provision that allows them to pay for insurance premiums from the disaster relief fund allocations. This will not only promote greater financial autonomy at the state level, but also has the advantage of requiring no additional budgeting by New Delhi.

Comments are welcome at theirview@livemint.com