Investors Are in Retreat, and the Poorest Countries Are Paying for It 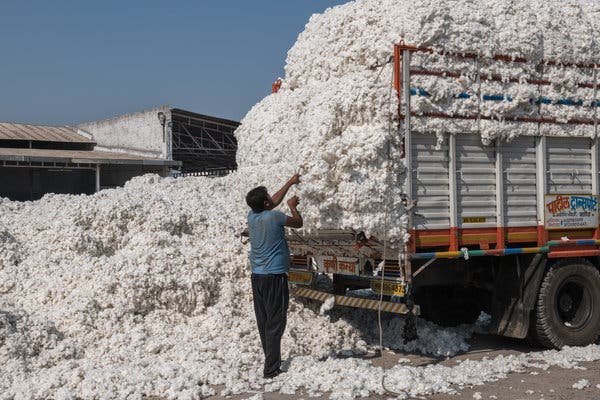 KADI, India — Vikram Singh is accustomed to life under the tyranny of elements he cannot control, from rains that do not fall to insects that tear at his crops. Lately one unchanging trouble is plaguing his family — rising prices.

“Everything has gone up,” Mr. Singh laments on a recent afternoon, as his family plucks a meager cotton harvest on their one-acre patch of earth in the Indian state of Gujarat. He rattles off the items that cost more: the lentils that are a staple of his family’s diet; the cotton-oil cakes they feed to their dairy cows. Fertilizer. Diesel fuel for their tractor. Clothing, and school fees for their four children. 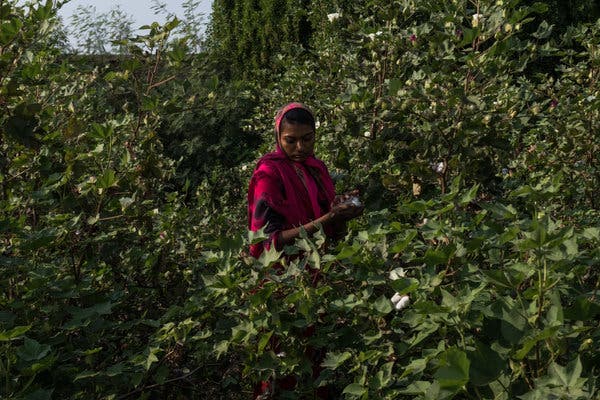 Across this nation of more than 1.3 billion people, as in many of the world’s developing countries, versions of such tribulations are diminishing fortunes.

The strain of higher prices reflects a global change in sentiment as the United States Federal Reserve — known, not for nothing, as the central bank for the world — steadily lifts interest rates, as it did on Wednesday. Investors have been pulling money out of riskier, developing countries and entrusting it to safer, more established economies like the United States. That has sent the value of currencies plunging from Argentina to Turkey to India, making basic goods more expensive for households and businesses, while amplifying debts.

As money abandons emerging markets, commercial activity is slowing, magnifying concerns about a broader deceleration of growth in the global economy. Such worries have been adding to troubles in stock markets around the world, including the United States, with investors absorbing the likelihood of leaner times.

The change in the flow of money has been engineered in part by people in Washington, some 8,000 miles away from Mr. Singh’s farm in western India. The American central bank has been raising interest rates, ending the era of ultracheap money unleashed a decade ago as the world plunged into the worst financial crisis since the Great Depression.

Back when rates were effectively zero, investors scoured the globe for higher returns, placing big bets on high-risk, high-reward countries — India among them — propping up the value of currencies. With the Federal Reserve now reversing course, money has been washing back to the United States, bolstering the American dollar, while depressing many emerging market currencies.

Last year, global investors delivered $315 billion in fresh capital to the stock and bond markets of emerging economies, not counting China, according to an analysis by Oxford Economics in London. This year, the flow dropped to $105 billion through October. Many economies have seen outright reversals, with Turkey, Argentina, India, Indonesia, Malaysia, Thailand and South Africa all seeing overall declines.

This turnaround has exposed many countries to a painful reckoning, contributing to full-blown crises in Turkeyand Argentina. There, precipitous plunges in currencies have left companies that borrowed in dollars staring at impossible debts. Argentina was forced to accept a $50 billion bailout from the International Monetary Fund.

India is in no imminent danger. Official data shows the economy expanding at well over a 7 percent annual clip, though the pace is slowing. The official inflation rate, below 4 percent, is not flashing emergency.

But beneath these headline figures are significant troubles that are prompting money to leave India, applying pressure to families and businesses. Given that India imports more goods than it exports, the effects are potent. Any increase in cost, any factor discouraging companies from hiring, strains a country in which one in five people survive on no more than $1.90 per day, according to the World Bank.

“India is a country that is very vulnerable to the fallout to the readjustment of global interest rates,” says Joseph E. Stiglitz, a Nobel laureate economist at Columbia University in New York, and a former chief economist at the World Bank.

India imports more than 80 percent of its oil. Though the price of Brent crude oil — the global benchmark — has plummetedover the last two months, it has more than doubled since early 2016. Oil is priced in dollars. Its increase, combined with a 10 percent decline in the value of the rupee this year, have lifted the cost of petroleum-based products, from fuel to chemicals used by key parts of Indian industry.

Concerns are mounting about rising debt levels as the government of Prime Minister Narendra Modi unleashes spending aimed at winning popular support ahead of next year’s elections. Worries fester over bad loans choking a banking system still dominated by the government.

Doubts about India’s economic vigor have been enhanced as Mr. Modi’s government has sniped with the Reserve Bank of India, suggesting it should hand over some of its cash to finance public spending. The drama has resonated as an attack on the central bank’s independence, an impression only enhanced this month by the sudden resignation of the bank’s governor, Urjit Patel.

All of this has combined to prompt investors to yank their money out of India, pushing the rupee down.

Many of the necessary petroleum products have risen in price by as much as 35 percent. At the same time, a glut of plastics factories worldwide has prevented producers from raising prices, hurting profit margins.

“We are very much affected,” says Jigish Doshi, president of the Plastindia Foundation, an alliance of plastic industry trade groups that collectively represent more than 50,000 plastics companies across India.

Mr. Doshi’s own company, the Vishakha Group, makes plastic pipes used for irrigation. The fall in the rupee has lifted the cost of the raw materials by 15 percent over the last year. “We are slowing our production,” he says.

Gujarat is also a major source of dyes used for coloring textiles and plastic household goods. The fall in the rupee has supplied Indian exporters a competitive advantage, reducing the price of their wares in dollar terms.

So has the Trump administration’s tariffs on Chinese goods. Indian companies are gaining orders from American manufacturers seeking alternatives to Chinese suppliers, said Bipin Patel, a director at Jay Chemical Industries Ltd., which operates four dye-making factories in Ahmedabad and exports to some 75 countries.

But the raw materials used to make dyes have risen in price, cutting Jay Chemical’s profit margin in half. That trend may still be unfolding.

“The rupee is unsustainable,” says Sebastian Morris, an economist at the Indian Institute of Management in Ahmedabad. “It can fall quite a bit more.”

At a Mercedes dealership in the center of Ahmedabad, where the most expensive model, the Maybach S 650 sedan, sells for 35 million rupees (more than $486,000), sales staff fret that the weaker rupee has inflated the costs of the vehicles. The top models are imported from factories in Germany.

Two blocks away, on a patch of garbage-strewn dirt within view of the dealership’s spinning Mercedes logo, some 600 people live without electricity in shacks fashioned with boards, plastic tarps and sheets of corrugated aluminum. Women scrub pots using water delivered once a day by a municipal tanker. Children pound sticks in the dirt for lack of toys.

Most of the families are migrants from villages who survive as so-called ragpickers, earning less than $3 a day as they scour city streets for discarded materials they can sell — plastic bottles, scraps of paper, pieces of metal.

Laxman Gohel, a 38-year-old father of two, saved enough from ragpicking to open a tea shop. He boils water over a charcoal fire, making sales of about 1,500 rupees a day (about $21). But the price of charcoal has more than doubled over the past year, leaving him with perhaps 300 rupees in daily profit. He cannot pass on the costs.

“These poor people cannot pay me more,” he says.

Across an alleyway, Shahbaz Ansari, 17, works part time repairing truck tires at his father’s roadside stall. He is in his final year of high school. After graduation, he imagines a job inside an air-conditioned office.

Even the children of middle-class homes worry about declining opportunities.

As they sip fresh juice procured from a sidewalk stand, four students enrolled in a three-year college program in business administration express fears that the program may not deliver them to their desired management jobs.

“The rupee is falling day by day,” says Vatsal Thakkar, 18. “Wages are falling, so I’m thinking about going to Canada.”

Thirty miles northwest of Ahmedabad in the town of Kadi, the Singh family’s fortunes are firmly tethered to their land.

Last year torrential rains destroyed their cotton cop entirely. This year, an insect infestation has cut it by half.

On a recent afternoon, Mr. Singh’s wife, Sonal Ben, stands in the 95-degree heat, pulling puffs of cotton from the plants that have flowered, and depositing them into plastic bags. Mr. Singh will use his tractor to haul the crop to a trader in town.

The diesel that fuels his vehicle has increased in price by one-fifth. Yet when he brings his crop to market, he cannot recoup the additional costs.

“The traders decide on the price,” he says. “I don’t decide.”

The traders themselves insist they are themselves at the mercy of global forces, accepting whatever price is dictated by commodity pits from New York to São Paulo.

“Now, we are losing money,” says Prahlad Bhai Patel, owner of a cotton mill in Kadi.

Ordinarily, Mr. Patel’s company sells half the product to domestic factories that spin cotton, and exports the other half to China, Bangladesh, Vietnam and Pakistan.

Lately, he just piles up bales at a loading dock, waiting for better days. The price for his exports is now too low to cover his costs, he says.