Is socialism to blame for Venezuela's never-ending crisis?

Though '21st-century socialism' is implicated in Venezuela's collapse, so too are many characteristics of capitalism. 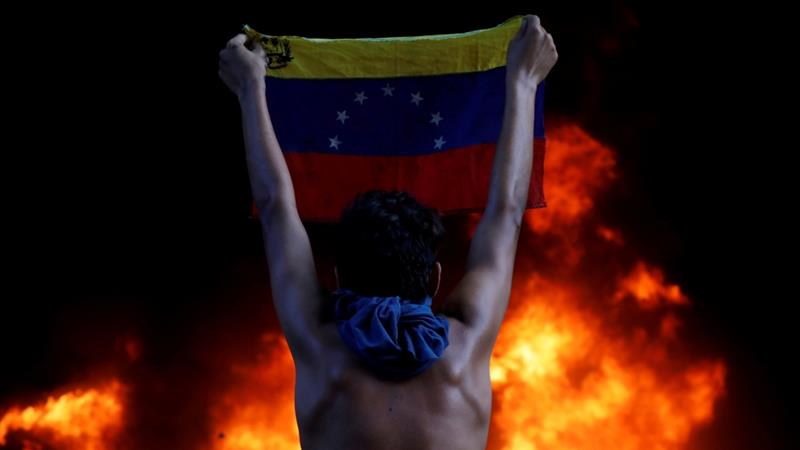 Inflation is spiralling out of control, oil productionis plummeting, foreign assets have been seized, there are serious shortages of food and medicine, tens of thousands are fleeing the country, and the incumbent government of Nicolas Maduro has increasingly weakened the country's democratic instruments to cling to power.

The natural question in a country that boasts the world's largest proven oil reserves is, how did it come to this? Many have latched on to a simple answer: socialism. But is it really that simple?

The underlying causes of Venezuela's hydra-headed crisis are economic, relating especially to oil and the foreign currency that it brings into the country.

The proximate cause of the recent turmoil is undoubtedly the 70-percent drop in oil prices in 2014, but the same problems that got exacerbated at that point were already in evidence five years earlier. And then, as now, they were fostered by poor policy choices.

Grave shortages are due largely to weak local production combined with a lack of foreign currency for imports, both of which relate to mismanagement of the local currency (the bolivar).

Essentially, in an attempt to prevent capital flight and currency collapse while also protecting local producers and enforcing labour law, Maduro's predecessor Hugo Chavez introduced controls on access to foreign currency. Subsidies and price controls were also implemented for many food items in order to keep them affordable to the poor, and an extremely generous subsidy on gasoline was maintained.

But since the bolivar was overvalued, local products became less competitive abroad, whereas foreign products became cheaper at home, thereby reducing demand for national produce. This effective subsidy on purchasing dollars spurred already strong demand from those keen to avoid inflation or devaluation of the local currency.

Many businesses and individuals were also willing to pay a premium to circumvent controls, either to avoid bureaucratic trade barriers or to safeguard the value of their capital, and a currency black market sprang up to cater for this demand. Where black-market dollars became part of the cost structure of basic goods, the profit margin between the cost of production and state-controlled prices narrowed or disappeared entirely, causing further damage to local production.

Beyond undermining local businesses, these policies also created opportunities and incentives for corruption, which grew in attractiveness in step with economic distortions, creating a vicious cycle.

Differences in price are captured privately at the state's expense while producing nothing, which in turn leaves fewer resources available for the everyday business of running the country.

When the former finance minister Jorge Giordani resigned in protest of Maduro's mishandling of the economy, he estimated that between 2003 and 2012 a truly incredible $300bn was lost to currency arbitrage alone.

In the short term, Chavez - unlike Maduro - prevented this problem from spiralling out of control by devaluing the local currency when official and black-market rates began to diverge significantly.

But in the long term, he placed his faith in a socioeconomic "about face". This transformation was premised on the power of a social economy that would use alternative forms of organisation, such as cooperatives and self-managed factories, to revive local production and provoke an empowering cultural shift towards active social engagement and solidarity.

But massive state investment in nationalised and self- or co-managed industries bore little fruit. And even though the number of cooperatives exploded, in practice they were often as inefficient, corrupt, nepotistic, and exploitative as the private sector that they were supposed to displace.

Inasmuch as these were statist policies of 21st-century socialism, we might indeed say socialism is to blame. But there is more to it.

First, it is important to realise that Chavez chose to call his transformative project "21st-century socialism", but Venezuela's economy remained market-based and private-sector dominated throughout his time in office.

Though the social economy and the public sector were heavily promoted - including through nationalisation - the private sector was expected to remain dominant, and it did. A centrally planned socialist economy like Cuba's was neither the aim nor the reality.

Second, part of the problem was always that oil-rich, hyper-consumerist Venezuela was the last place you would expect socialism to blossom - and these characteristics caused grave problems for the government.

The crucial role of oil in the international capitalist system makes oil-price volatility a central player in Venezuelan development, as Maduro has discovered to his cost.

But more importantly, the sheer value of oil provokes the "resource curse" in undiversified economies like Venezuela's. With boom-time windfalls favouring exchange-rate shifts that make other exports uncompetitive, "petromania" leads to lavish public spending, while distorted incentives undermine ethics, entrepreneurship, and efficiency throughout the state and wider society.

As Al Jazeera's insightful documentary The Battle for Venezuela explains, this is nothing new. On the contrary, Venezuela's formation as a state and as a society was intimately linked to the oil industry, and this is reflected in its politics.

Oil, opposition, and obstacles to development

The benefiting elite, from which the core of Venezuela's opposition emerged, rightly recognised that Chavez's promise to redistribute the oil wealth to the marginalised majority was sincere. But they also instinctively understood that Chavez wanted to rewrite the national narrative without the rich, white, educated, Western-facing elite as its heroes, thereby also robbing them of the social status that reproduced and ring-fenced their material wealth.

It is this cultural threat that explains the ferocity and durability of elite rage and obstructionism: staging the 2002 coup even though Chavez's democratic legitimacy was undoubted and then organising a devastating, management-led oil strike at a time when his economic policy remained more reformist than radical.

By his own account, it was the implacability and intransigence of this elite, bequeathed to him by Venezuela's capitalist history, that drove Chavez towards the idea of a more radical 21st-century socialism in 2005.

Like the bolivar, the claim of an "economic war" is a ludicrously devalued currency under Maduro. However, nothing suggests that provoking political problems through hoarding, cutting production, or manipulating the black-market exchange rate was ever beyond the pale for private actors with the power to do it.

Companies and wealthy individuals have also always had the clearest means and the most capital to invest in the large-scale currency arbitrage that has been bleeding Venezuela dry for over a decade.

But the effects of oil dependency extend far beyond a particular group or class. As one of the architects of Venezuela's social-economy drive puts it, the pervasive culture has always favoured "living off government transfers of [oil] rents instead of deservedly enjoying the fruits of productive work."

In Venezuela, social divisions are so deep and societal trust is so weak that the idea of a social contract, a national pulling-together, or even a basic acceptance of the rules of the game is a distant dream. As the local saying goes, "for my friends, anything; for my enemies, the law".

Politics must play out against a cultural backdrop that implicitly understands that you should use any means necessary to siphon off as much oil wealth as possible for you and yours.

The trinity of misplaced faith

Chavez responded to these difficult circumstances by putting his faith in three things: himself, the military, and socialism.

Faith in himself meant improvising new institutions and funding sources linked to the presidency so that he could implement his ideas immediately and without internal opposition. Faith in the military meant placing trusted "right-hand men", especially those involved in his 1992 coup attempt, in positions of institutional and financial power, as well as assigning key economic functions to the army.

And faith in socialism meant believing in the transformative power of participatory democracy and the social economy to replace the prevailing petro-state mentality of "grab what you can" with a more social, solidarity-based ethic.

Sadly, each leap of faith had serious unintended consequences.

Moving power away from the traditional state removed even the deficient monitoring and accountability that they offered, hampering control and enabling corruption.

The ideological convictions of trusted lieutenants from the 1992 coup turned out to be far weaker than the massive incentives to embezzle state resources, and neither were they afraid to put their subordinates to work in smuggling networks.

More broadly, though many marginalised citizens were undoubtedly empowered and enlightened by their experience of Chavez's Bolivarian Revolution, just as many relaxed into a clientelistic exchange of state benefits for political support.

Chavez also began to abuse the tools of his socialist transformation - particularly nationalisation and access to foreign currency - more as a means of disciplining the private sector than of reshaping the economy.

With the death of Chavez in 2013, this dysfunctional, highly centralised system passed into the hands of Maduro, a leader with far less capacity to control the powerful forces rending the country asunder.

But rather than allow democratic politics to take its course as the limitations of his administration were exposed by plummeting oil prices, Maduro waded across the anti-democratic Rubicon into which Chavez had only dipped his toes.

By nixing a recall referendum, jailing political opponents, invoking a constituent assembly to usurp the democratically elected parliament, and creating a link between political support and access to essential goods, Maduro has now blocked any path out of Venezuela's crisis.

So is socialism to blame for Venezuela's woes?

Certain statist economic policies associated with a project called 21st-century socialism are indeed implicated in many of the economic distortions and damaging incentives ravaging the Venezuelan economy.

But they were also implemented in a highly divided, distrustful, and conflictual society in which the oil-rich state is seen as a means of securing personal wealth.

Chavez's response to implacable opposition and widespread corruption was to turn to those he trusted in the military and to the promise of social transformation through socialisation of the economy. But his faith in neither was repaid.

In many ways, the blame game is a red herring, an exercise in cherry-picking to promote greater state intervention or the "free" market rather than any identifiable model. The statist might cite happy Norway before the Gulag, whereas the free-marketeer will surely prefer New Zealand's peaceful neoliberalisation during the 1980s to the murder and torture of Chile's under Pinochet.

The lesson is perhaps that there are no clean, textbook models. The real issue is whether a given political economy is producing desirable results for its citizens. Where once that was the case in Venezuela, clearly it is no longer so.