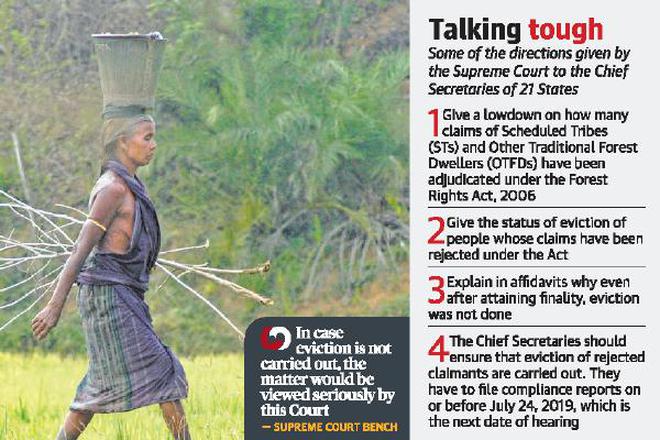 A recent Supreme Court order may lead to the eviction of lakhs of persons belonging to the Scheduled Tribes (STs) and Other Traditional Forest Dwellers (OTFDs) categories across 21 States — their claim as forest dwellers have been rejected under the Forest Rights Act of 2006.

A three-judge Bench of Justices Arun Mishra, Navin Sinha and Indira Banerjee on February 13 had ordered the Chief Secretaries of many of these States to evict those whose claims as forest dwellers have been finally rejected under the law. The court directed that the eviction should be carried out on or before July 24, 2019, that is, the next date of hearing.

The Bench, in a 19-page order, cautioned the States that if the evictions are not carried out within the stipulated time, “the matter would be viewed seriously.”

The court ordered the States’ Chief Secretaries to also file affidavits by July 12, explaining why the rejected claimants were not evicted even after their claims were junked.

Section 6 of the Scheduled Tribes and Other Traditional Forest Dwellers (Recognition of Forest Rights) Act of 2006 shows a multi-layered and hierarchical procedure for recognition or rejection of forest-dweller claims starting at the gram sabha level with multiple appellate committees at the State level.

The Act is intended to provide a framework to “recognise and vest the forest rights and occupation in forest land in forest dwelling Scheduled Tribes and other traditional forest dwellers who have been residing in such forests for generations but whose rights could not be recorded.”

In Andhra Pradesh, the court recorded that not a single order of eviction has been complied though 66,351 claims across 1,14,400 acres of forest land have been rejected. “Once orders of eviction have been passed, the eviction ought to have taken place,” the Supreme Court said. Likewise in Assam, 22,398 claims of STs and 5,136 claims of OTFDs across 10,128 hectares and 561.4 hectares, respectively, were rejected.