Detainees protest against smuggling networks in Libya, where many are allegedly sold and resold numerous times.

by Sally Hayden6 hours ago 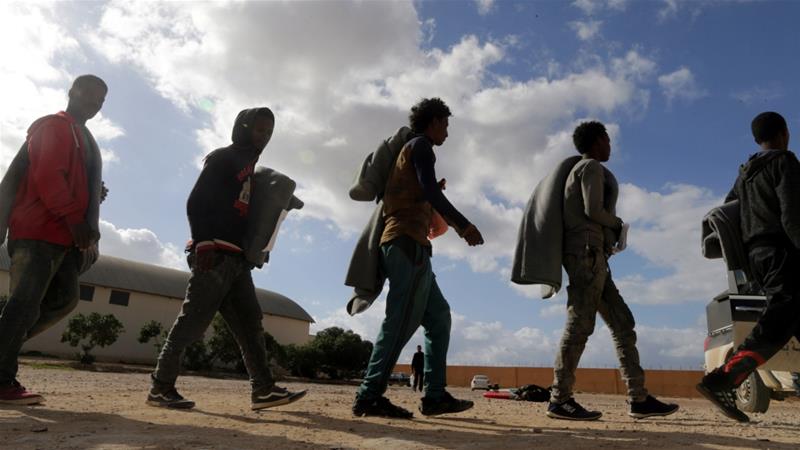 On the walls of Souq al Khamis migrant detention centre in Khoms, a port city in northwest Libya, warnings of new arrivals are scratched on a grey wall.

"Who comes to this house, may God help you," one says, visible in pictures of the centre sent to Al Jazeera by people currently detained there. "Libya is a market of human beings."

"Where is UNHCR?" reads another. "Three people were sold here."

Refugees and migrants usually arriveat Souq al Khamis, a centre run by Libya's Department for Combatting Illegal Migration (DCIM), shortly after they try to cross the Mediterranean Sea to Italy, and are intercepted by the European Union-funded Libyan coastguard.

Tens of thousands of people have been returned to Libya this way since February 2017, when Italy did a deal with the United Nations-backed Libyan government of National Accord, in a bid to stop new arrivals in Europe.

The UN has condemned the agreement as "inhuman" and said "the suffering of migrants detained in Libya is an outrage to the conscience of humanity".

Refugees and migrants caught by the Libyan coastguard are usually locked up indefinitely in a network of detention centres run by the DCIM.

Inside Libyan detention 'hell' where refugee burned himself alive

Along with a lack of food, medical care, and well-documented abuse, detainees also worry they could be sold back into the very smuggling networks they're desperate to escape.

The former detainees are all now in different places; three in other detention centres, one renting a room in the Libyan capital, Tripoli, and one in Tunisia.

Several don't know each other, but their accounts of the centre tallied. Some also supplied refugee case numbers and identity documents, and their reports of life in Libyan detention centres have remained consistent in separate interviews held over several months.

'They stole our friends'

In the past two weeks, the situation in Souq al Khamis has escalated after five detainees were removed by force from the centre on December 7, according to current detainees who witnessed three of them being taken.

"First some guys came, they asked all of us if we want to leave, but we told them we didn't want to… Then some other guys came, asked the police guard to take some men to work… after that they stole them," one Eritrean detainee said. He said the three included two Somalis, aged 15 and 21, and a 16-year-old Eritrean.

Refugees and migrants still in Khoms say they believe the missing people were sold to traffickers. Since then, detainees have been protesting, and have sent multiple videos to Al Jazeera which they say show these protests, but say the Libyan guards have now threatened to kill them if they don't stop.

Migrant detention centres in Libya unable to cope amid fighting (2:57)

One of the videos appears to show migrants and refugees walking towards a guard, who shoots with his gun at the ground in retaliation.

Another shows armed guards smoking by a wall as detainees sit on the ground, with some of their arms crossed in a protest symbol that means "freedom".

The detainees have also sent photos and a GPS location to confirm where they are.

"They stole our friends," one current detainee told Al Jazeera through WhatsApp messages from a hidden phone.

"I'm afraid for my friends." He said there are currently 10 women left in the centre and fewer than 90 men. Everyone's worried about being next, he said, so they're appealing to the international community to help them.

Al Jazeera has repeatedly reached out to the DCIM for comment but has yet to receive a reply.

Their plight highlights the circles of abuse, exploitation and fear that many refugees and migrants fall into in Libya, where they can end up being sold and resold several times.

It also explains why a large number of refugees see escaping to Europe, across the Mediterranean Sea, as their only option, rather than waiting months or years in detention for the slow process of legal evacuation and resettlement.

Two other Eritreans, who were in Souq al Khamis between November 2017 and January 2018, and are now in Tripoli, said 18 detainees were sold to traffickers in Bani Walid, northern Libya, directly from Souq al Khamis, while they were there.

"It's beyond my word to explain the inhumanity (that) happened," one said. "We heard some of them lost their lives by tremendous, brutal beatings and (they were) electrocuted with so many volts. I know them, they were little guys. (Their) only hope was to step in to Europe, nothing more."

Another refugee who had been in Khoms, was reunited with two of the 18 allegedly sold, after he said their families paid ransoms of $12,000 each to traffickers, through bank accounts in Dubai.

He said they were sold to the trafficking group in December and released to a Tripoli DCIM-run centre in April.

He told Al Jazeera in a Facebook message that they were very traumatised after what happened to them.

"They don't talk… they don't remember… They had nightmares every night," he wrote.

One of the two was evacuated to Niger and another agreed to go back to Eritrea, according to the current detainee. Eight others, whose families couldn't pay, had already been killed, he said.

An Eritrean in his 20s, he left Souq al Khamis by bribing the guards with $1,000 to move him to a different centre. Before leaving, he and other detainees used toothpaste and carbon to write warnings on the walls for those who'd come after them.

Those warnings were seen by other detainees Al Jazeera interviewed, including a 19-year-old who was held in Souq al Khamis in March.

"There were too many names written on the toilet wall and quotes." The teenager also bribed the management to be allowed to leave safely.

"Policemen in Libya and smugglers are just like hand in glove," he said, adding that he believes the EU should not be condoning returns to Libya, or working with Libyan authorities.

A Somali refugee, held in Souq al Khamis between February and May this year, said he knows two people who were sold to traffickers from there and forced to pay $20,000 to secure their release.

He is now living on the streets in Tripoli, after escaping detention during heavy fighting in August and September. He spoke to Al Jazeera through Facebook messages.

"Once we came in Khoms, we got warning messages written on the walls, (saying) don't let anyone go outside or work with soldiers outside the prison, otherwise they will sell you."

Meanwhile, those who remain in Souq al Khamis now say they're terrified. A current Eritrean detainee told Al Jazeera by phone that he already spent two years with traffickers before trying to cross the Mediterranean, and his family has paid more than $9,000 in ransom payments.

He has been sending video updates and messages through WhatsApp on a daily basis from Khoms since December 7, when the five detainees were reportedly taken from the centre.

"Now death is OK for me if someone asks me to pay," he said, explaining his family already sold their home to raise money to help him, and can't afford to pay anything else. He said the guards are now "boasting, saying they will kill us, or take us to a place (where) nobody can find us."

The young man said he has been in Souq al Khamis for seven months. He claimed one detainee was cut through his palm with a knife by guards, when he refused to go "out to work".

"I'm not going to lie to you, I don't know even if this centre is being run by the government or not; I couldn't differentiate it," he said.

"Yes, they wear police officers' clothes but they work like smugglers. They torture, they kidnap, they steal, how can we differentiate?"

Another current detainee told Al Jazeera that around 20 people in Souq al Khamis have tried to kill themselves, but they've been stopped by other refugees and migrants.

"The world can't find us, we're especially isolated," he said. "Some are getting mental desperation. We are living in a dark hell."

The European External Action Service, the UN Refugee Agency, and DCIM did not respond to requests for comment. The International Organisation for Migration (IOM), which said in a May statement they were providing assistance in Souq al Khamis, told Al Jazeera they do not have a permanent presence in the detention centre so cannot confirm these reports.