They are symbols of Soviet oppression to some but part of collective memory to others. Should Soviet-era monuments and buildings be protected? 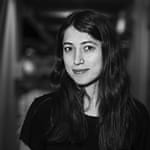 Georgia was born as an independent post-Soviet republic just four years after me, so in a sense, we grew up together. We both had to learn everything from scratch, make painful mistakes and navigate the legacy of Soviet rule.

Nowhere is that legacy more visible than in the buildings and monuments the Soviets left behind. Almost 30 years after Georgia gained independence, they squat on the hillsides of our towns and cities as if awaiting the return of their Soviet masters.

Decades have passed since that era, and that empire does not exist any more. So why should my generation, which has absolutely no mental connection with the Soviet ideology, live in its shadow? Should we not get rid of Soviet-era architecture, these symbols of oppression?

I was surprised to find out during the production of my Al Jazeera Correspondent film, The Soviet Scar, that these questions are infuriating for some people in my country. 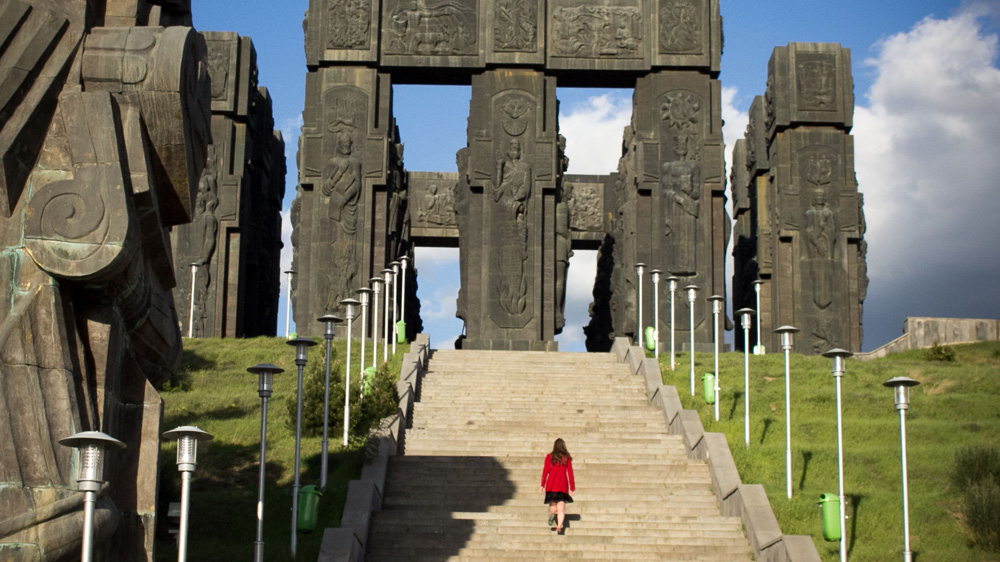 During the Soviet era, successive leaderships built thousands of monuments to their power [Al Jazeera]

'A lot of freedom but no bread to eat'

Yuri Mechitov is a renowned Georgian photographer who was roughly my age during Georgia's push for independence. In 1989, he took the iconic black and white photograph of a Georgian woman defiantly holding a black flag in the hours after Soviet forces cracked down on peaceful protesters in Tbilisi.

"The Soviet Union was, of course, our home, even if it was a closed country. You couldn't easily buy jeans or new LPs and we regarded that as a problem at the time, but now it seems silly. We ruined the country for a chewing gum," he said, referring to the shortages of non-essential goods that anti-Soviet protesters were fed up with. "Now I have a lot of freedom, but no bread to eat."

As part of the generation that grew up with Georgian independence, my schoolteachers frequently extolled the virtues of our glorious ancient past and its free spirit - but all I could see around me was a nation that had been living in a kind of box for 70 years.

They are just buildings. Even the buildings in human history which keep the memory of tragedy, they are monuments and they are kept. If we go around the world and start to demolish everything that was built during [the time of] some tyrant, we are going to erase half of our history and half of the monuments.IRAKLI ZHVANIA, GEORGIAN ARCHITECT

'Generations were raised in these buildings'

For me, Soviet-era architecture is a throwback to Soviet authoritarianism.

Most of all, it's the blocks. Row after row. Street after street. The ugly, utilitarian housing blocks that families like mine were forced to live in are a painful reminder of the way lives were destroyed - including the one of my great great grandfather who was purged for no reason.

People were assigned to the blocks by profession or religious affiliation to keep a ready concentration of workers around industrial areas but also to more easily monitor and collect information on specific groups.

"This was a very good tool [for the state] to be very well informed about a certain community. A very good source of information and control … You could hear what your neighbour is talking about behind a wall, who is visiting whom, what they are doing and so on," explained architect Irakli Zhvania, who leads the Ugly Walk in Tbilisi. 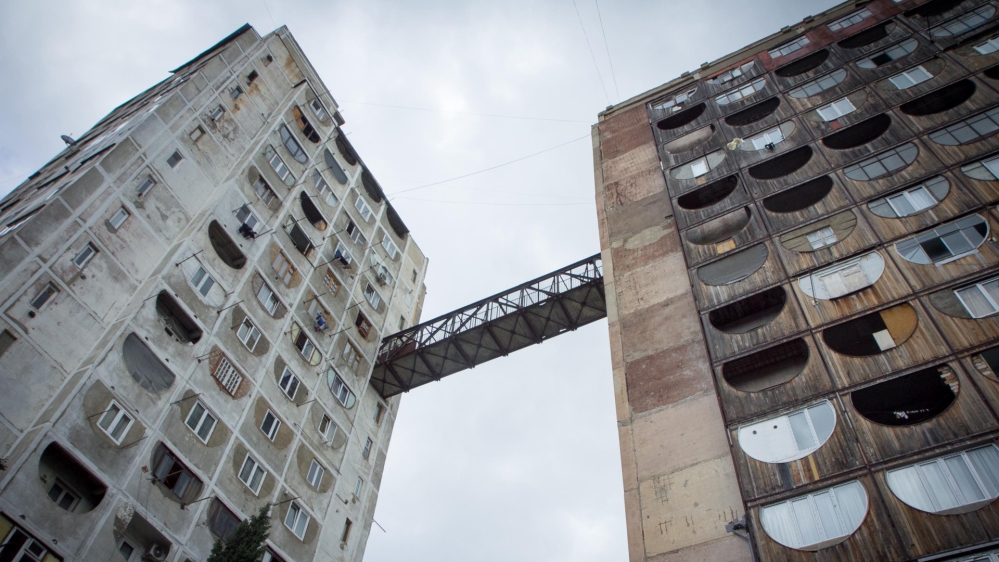 Several years older than me, Zhvania had experienced the last breaths of the Soviet system first hand and started the walks as a way of reflecting on the post-Soviet architecture.

For many of Mechitov's as well as Zhvania's generation, the demolition of Soviet residence blocks and monuments would be unthinkable.

He also believes that we should not be angry at buildings for the nature of the regime that commissioned them, pointing to the architectural value of some of the Soviet-era structures.

"First of all, they are just buildings. Even the buildings in human history which keep the memory of tragedy, they are monuments, and they are kept," he said. "If we go around the world and start to demolish everything that was built during [the time of] some tyrant, we are going to erase half of our history and half of the monuments." 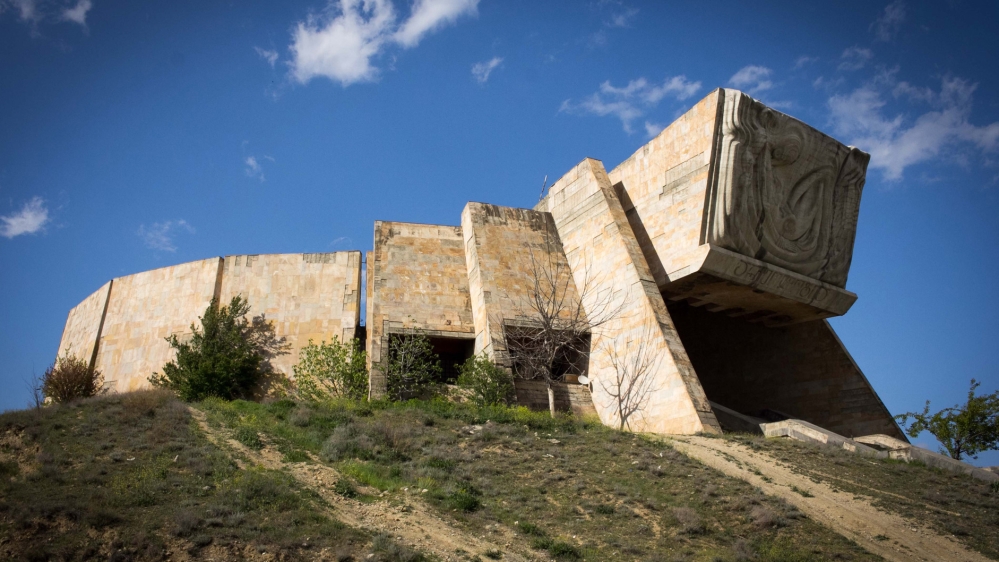 Zhvania's comments made me look at the legacy of Soviet architecture in a different way, and made me think of the abandoned Archeology Museum built in Tbilisi in 1988.

It was built by two Georgian architects, Shota Kavlashvili and Shota Gvantseladze, and is a unique piece of architecture. It would be a shame to demolish it just because it was built during the period of the Soviet occupation.

Another Soviet-era building that should be preserved was designed by architects Giorgi Chakhava and Zurab Jalaghania. Built in 1975, it used to house the Ministry of Highway Construction in Tbilisi.

I still believe that many of the structures left over from Soviet times - especially the ones built during the era of Soviet leader Nikita Khrushchev - no longer serve us and should be taken down.

But in the end, we - the Georgian people - should have an honest discussion about the past and decide how to deal with our country's Soviet legacy, which I call "the Soviet scar". 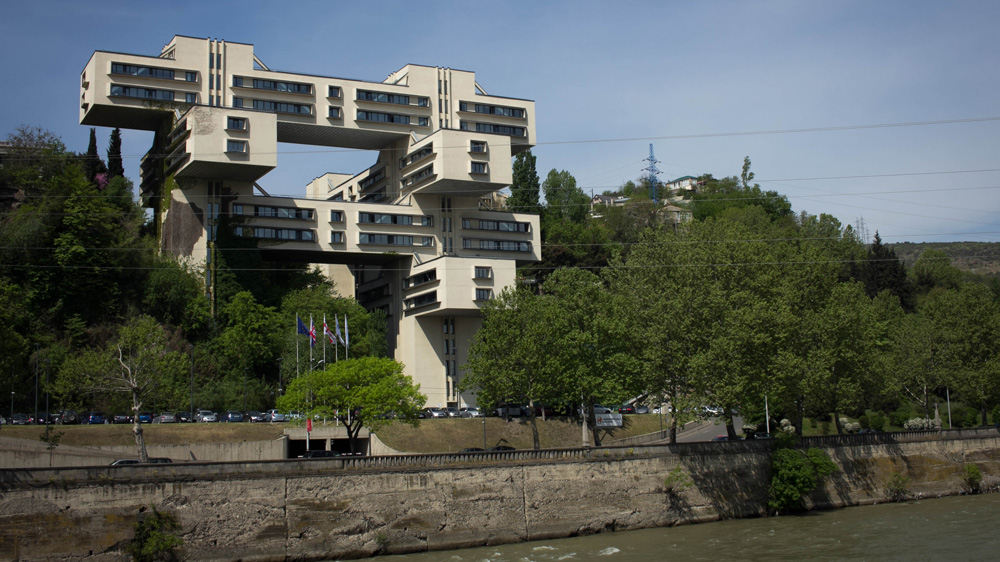 Built in 1975, this structure used to house the Ministry of Highway Construction in Tbilisi [Al Jazeera]