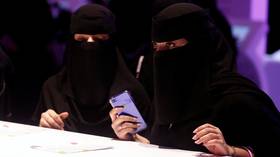 FILE PHOTO: Saudi women at an exhibition in Riyadh, Saudi Arabia September 28, 2017. © Reuters / Faisal Al NasserSaudi Arabia has adopted a new regulation that requires courts to notify women by text message if they’ve been divorced. The forward-thinking law is designed to crack down on the kingdom’s penchant for “secret divorces”.

Before the new rule, Saudi men were able to end their marriages without telling their wives. Starting from Sunday, the country’s courts will be directed to send text messages informing women that their marriages are over.

The regulation, which bears a striking resemblance to relationship-ending tactics employed by twelve-year-olds, aims to ensure that women are aware of their marital status and can take necessary legal measures to protect rights such as alimony.

ALSO ON RT.COMSaudi women get driving licenses – but still can't do these 8 things

Last year a decades-old driving ban on women was reversed, meaning that a Saudi female can now drive down the street while simultaneously receiving a text notification that her husband has left her. She’ll first need to get her husband’s permission to receive a driver’s license, of course. Also, her testimony before a divorce court will only be worth half that of her husband’s. Rules are rules!

The ease and convenience of text message breakups is not a Saudi invention, however. A fatwa issued by Turkey’s Directorate of Religious Affairs in December 2017 ruled that unhappy unions can be dissolved via telephone call, fax, letter or even text message, using a method known as a “triple talaq” divorce.