Teenagers Emerge as a Force in Climate Protests Across Europe

Thousands of students skipped school on Thursday and swamped the center of Brussels to demand better protection of the world’s climate.CreditFrancisco Seco/Associated Press 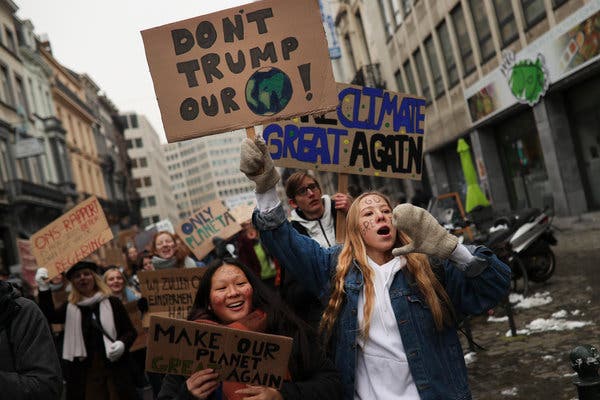 BRUSSELS — Tens of thousand of children skipped school in Belgium on Thursday to join demonstrations for action against climate change, part of a broader environmental protest movement across Europe that has gathered force over the past several weeks.

In Germany, France, Sweden, Switzerland and elsewhere, activists have come together on social media to gather in large numbers and without much apparent preparation, the protests taking a different shape in each country.

In Germany, students have protested on Fridays, communicating mainly through the messaging app WhatsApp; in Belgium, they organize on Facebook and have skipped school by the thousands on four consecutive Thursdays.

Last Sunday, climate protests in Brussels swelled to an estimated 100,000 people of all ages. That same day, an estimated 80,000 took part in cities across France — more than turned out for the “Yellow Vest” protests the day before.

The climate movement has no obvious leaders or structure, but a 16-year-old Swede, Greta Thunberg, has drawn worldwide attention and inspired many of the protesters. She has called for school strikes to raise awareness of global warming, scolded world political and economic leaders at this month’s gathering in Davos, Switzerland, and even has her own TED Talk.

Most older people do not feel the urgency young people do about global warming, said Axelle Kiambi, 17, who joined a demonstration in Brussels on Thursday with her sisters, Pauline, 16, and Elisa, 19. 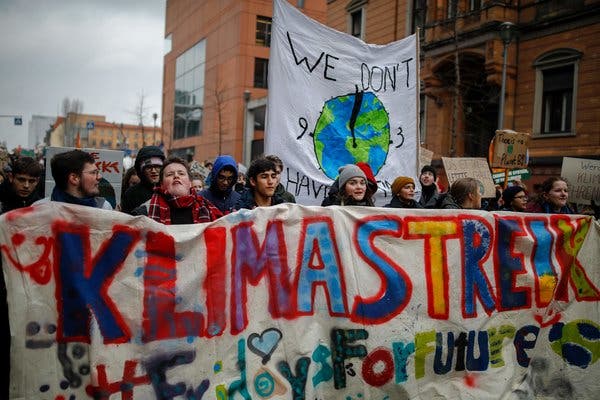 “To us, it is so self-evident that we can’t keep on going in this direction,” said Axelle, raising her voice above the drumming, whistling and shouting of her fellow protesters.

“We come here with the right intentions, to protest in peace and to raise awareness about climate change, because we want to be on the right side of history,” Elisa Kiambi said. “It is time for the government to act.”

After meeting this week with a delegation of climate activists, Belgium’s prime minister, Charles Michel, said he was prepared to act, but not at any cost.

“Nothing is for free, someone always has to pay the bills,” he said.

He seemed to refer to the Yellow Vest movement against economic woes and inequality, which has resonated with people across Europe, including in Belgium. That movement, which began in reaction to a planned fuel tax increase — presented as an environmental measure — has been at odds with concerns about the climate.

In France, few students have skipped school to protest, but an online petitiondemanding climate action by the government has gathered more than 2.1 million signatures. On the Place de la République in Paris last Sunday, protesters debated how to force climate change into President Emmanuel Macron’s nationwide dialogue in response to the Yellow Vests.

In both movements, there are people who argue that the fights against inequality and climate should not conflict. 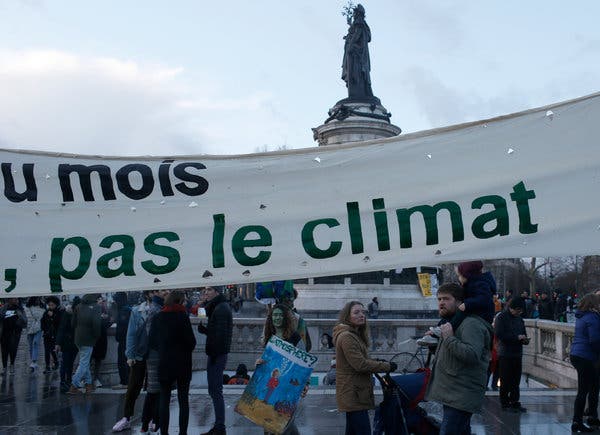 “One shouldn’t think that the Yellow Vests aren’t mindful of ecology, of the planet,” said Ingrid Levavasseur, 31, a Yellow Vest protester who is running for a seat in the European Parliament.

In Germany on Friday, about 3,500 high school and university students gathered in Munich under the banner “Fridays for Future.”

In Berlin, about 10,000 climate activists with signs like “It’s our future you are playing with” and “Climate S.O.S.” demonstrated in front of the Ministry of Economics and Technology, joined by the Chinese dissident artist Ai Weiwei.

“We tell people, dress warmly, because we are only getting started,” said Luisa Neubauer, 22, a university student who helps organize the Berlin protests.

On Friday morning, organizers met with the economics minister, Peter Altmaier, and members of the government’s coal commission. The next day, the commission recommended ending the use of coal to generate electricity by 2038.

In Brussels, Liam, 18, who was protesting for the third Thursday in a row, said there was “a growing momentum” in the movement, but he wondered if it should be more disruptive to draw more attention.

“Most adults probably think it’s cute that children protest,” he said. “But maybe we should change the timing of the protests to rush hour.”