The 2018 Nobel Peace Prize awarded to victim of sexual violence in Iraq,Nadia Murad.

The 2018 Nobel Peace Prize has been awarded to Denis Mukwege, a gynecologist victims of sexual violence in the Democratic Republic of Congo, and Nadia Murad, a Yazidi human rights activist and survivor of sexual slavery by Islamic State in Iraq.

The Norwegian Nobel Committee said in a statement that the award recognizes “their efforts to end the use of sexual violence as a weapon of war and armed conflict.”

“Mukwege is the foremost, most unifying symbol, both nationally and internationally, of the struggle to end sexual violence in war and armed conflicts,” the statement said. “His basic principle is that justice is everyone’s business.” 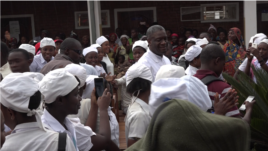 FILE - Denis Mukwege, right, is seen with staff members and patients at the the Panzi Hospital he runs in Bukavu, eastern DRC. (E. Muhero/VOA)

Murad, herself a victim of war crimes, “refused to accept the social codes that require women to remain silent and ashamed of the abuses to which they have been subjected,” the statement said. “She has shown uncommon courage in recounting her own sufferings and speaking up on behalf of other victims.”

Mukwege, 63, runs the Panzi Hospital in the eastern DRC, a volatile region where armed groups have often used sexual assault to terrorize civilians.  The doctor and hospital staff have treated or operated on thousands of women who were injured during rapes and other forms of sexual abuse.

U.N. Secretary-General Antonio Guterres said Friday that Mukwege has been "a fearless champion for the rights of women caught up in armed conflict who have suffered rape, exploitation and other horrific abuses.  Despite regular threats to his life, he made the Panzi Hospital... a haven from mistreatment."

Murad, 25, is the founder of Nadia's Initiative, an organization devoted to helping women victimized by genocide and other atrocities. 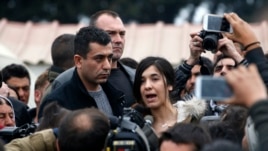 Guterres said Friday that Murad's "powerful advocacy has touched people across the world and helped to establish a vitally important United Nations investigation of the harrowing crimes that she and so many others endured."

The Nobel Prizes for medicine, physics and chemistry were awarded earlier in the week.  The literature prize was not given this year because of a sexual misconduct scandal at the body that decides the award.

The Nobel Memorial Prize for economic sciences will be awarded on Monday, October 8.

The peace prize comes with an award of $1.1 million.