The PTM in Pakistan: Another Bangladesh in the making?

A disaster looms in Pakistan, if the demands of the Pashtun population remain unaddressed.

by Taha Siddiqui 6 hours ago 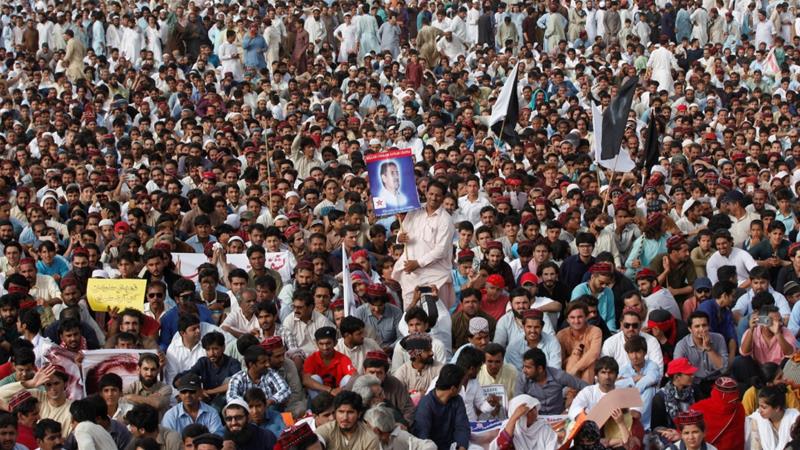 A year ago today, a young man named Naqeebullah Mehsud was killed in an alleged shoot-out in Pakistan's southern port city of Karachi. The police initially claimed that Mehsud was a "hardened member of the Pakistani Taliban" and was killed during a raid on "a terrorist hideout".

But his family, friends and some human rights organisations questioned this claim, saying Mehsud was just an innocent shopkeeper and aspiring model.

The government ordered an investigation. The police committee probing the incident found no evidence of a shoot-out or terrorist activity and was determined that Mehsud was killed by the police in a "fake encounter" - a practice Pakistani security forces are often accused of being involved in. Officers accused of being involved in the killing were put on trial which is still ongoing.

In the past, allegations of extrajudicial killings similar to this one were regularly ignored by the authorities, and security forces were allowed to operate with impunity. What set Mehsud's case apart, and forced the government to take swift action, was a little-known movement which started in his Waziristan hometown of Makin: thePashtun Tahaffuz (Protection) Movement (or PTM).

The PTM was launched by human rights activist Manzoor Pashteen to address the many grievances of Pashtuns, who are the second largest ethnic group in Pakistan and mostly live in the north-western part of the country, close to the Afghanistan border.

The Pashtuns have been bearing the brunt of the so-called "war on terror" for nearly two decades. When the US and its allies invaded Afghanistan following the 9/11 attacks, members of terror groups operating in that country passed the border with Pakistan and took refuge in the areas where Pashtuns reside. In response, the Pakistani military started carrying out operations to "clear the area from terrorists".

However, rather than stopping terrorist activity, military operations in the area increasingly victimised innocent civilians. Pashtuns across Pakistan started to be stereotyped as terrorists even though they themselves were victims of terrorism.

After the killing of Mehsud in Karachi, Manzoor Pashteen called for a march from Waziristan towards Islamabad. Thousands joined Pashteen on his way to the capital city demanding justice not just for the murdered man, but for all Pashtuns who have been facing discrimination in Pakistan.

This march rapidly transformed into a nationwide rights movement and the PTM was born. In rallies held across the country, Pashteen and his supporters raised questions about the reasons behind the army's failure to drive out militancy from their region and asked whether Pakistani authorities really wanted to eradicate such groups.

One slogan that they commonly used was "Yeh jo dehshatgardi hai, is ke peechay wardi hai" (behind this terrorism, is the [military] uniform), alleging a collusion between terrorists and the military.

The PTM also called for all accusations of extrajudicial killing to be investigated independently and demanded the practice of enforced disappearances - a legal term coined to explain abductions allegedly carried out by the Pakistan Army - to come to an end. Moreover, Pashteen and his supporters started pressuring the Pakistani government to reform thedraconian laws that govern the tribal belt that violate basic human rights, such as the law of collective responsibility which the Pakistani state routinely uses against locals from the tribal belt - punishing entire families, villages and tribes for the crimes of one person.

Rather than addressing the genuine grievances expressed by this growing movement, the Pakistani government chose to embark on a crackdown.

The Pakistani media stopped reporting on the movement's gatherings. Many of the members and leaders of the movement were repeatedly arrested by the police. The leaders were prevented from entering parts of Pakistan where they wanted to hold rallies. Recently some of PTM's members were also barred from leaving the country.

In one public briefing, the military media spokesperson accused the PTM of working on "an anti-Pakistan agenda" with the help of foreign hostile governments - a tactic often used by the Pakistani military to discredit its critics.

But the Pakistani state's efforts to silence and contain the movement have backfired. As a result of this state-led harassment campaign, the PTM gained more traction and its gatherings are becoming larger than ever.

While the movement has always claimed to be non-violent, there are now fears that the continuous use of such heavy-handed tactics to suppress the movement may result in a confrontation that may go out of control, as seen before in Pakistan.

Learning from past mistakes

In the past, a similar rights movement launched by East Pakistani residents eventually culminated into a movement for independence from Pakistan, and let to the creation of Bangladesh in 1971.

In the 1960s, the Bengali population living in East Pakistan, the largest ethnic group in the country at the time, felt neglected by the central government that was headed by General Ayub Khan. Instead of listening to the grievances of this group and addressing the injustices they say they have been facing, the military launched an operation against the aggrieved population. This caused the Bengalis to start an armed resistance which resulted in Pakistan's division.

Almost 50 years later, it seems that Pakistan's ruling elites have not learned much from history and seem to be repeating the same mistakes that led to much pain, bloodshed and irreversible damage to the nation in the 1970s.

Today as the PTM marks one year of its struggle, it is of utmost importance that the Pakistani civilian and military leadership address the legitimate concerns of the Pashtun population, meet their demands which are well within the scope of the Pakistani constitution and immediately stop persecuting those demanding their basic fundamental rights.

If this does not happen, the PTM may become a catalyst for the break-up of an already divided nation and Pakistan may head towards another national disaster.