Thousands take to streets of France after antisemitic attacks

Tens of thousands of people have taken to the streets in cities across France to protest against a recent rise in antisemitic attacks.

Political leaders from all parties, including former presidents Francois Hollande and Nicolas Sarkozy, gathered in Paris, filling the Place de la Republique, to decry anti-Semitic acts with one common slogan: “Enough!” Macron visited the national Holocaust memorial in Paris with the heads of the Senate and National Assembly.

It comes amid a rise in anti-Jewish attacks in France, which is home to the world’s largest Jewish population outside of Israel and the US.

The government has warned antisemitism is “spreading like poison” in France, despite the trauma still felt after 78,000 French Jews were deported to death camps, aided by the French collaborationist Vichy government, during the Nazi occupation in the second world war.

Overnight on Monday a Jewish cemetery in Quatzenheim in Alsace was targeted and about 80 tombs were defaced with swastikas. Macron visited the cemetery on Tuesday, telling local leaders and members of the Jewish community: “It’s important for me to be here with you today.”

At the weekend, on the margins of a gilets jaunes (yellow vests) anti-government protest in Paris, a torrent of hate speech was directed at the philosopher Alain Finkielkraut, the son of a Jewish Polish leather merchant who survived Auschwitz. A group of men called him a “dirty Zionist” and told him “France belongs to us”.

Two teenagers were arrested on Friday after they allegedly fired shots at a synagogue with an air rifle in the Paris suburb of Sarcelles, home to a large Jewish community. Earlier this month, swastikas were painted on Paris postboxes bearing portraits of the late politician and Holocaust survivor Simone Veil. The German word Juden (Jews) was sprayed on the window of a bagel bakery on the Île Saint-Louis, in the heart of the capital.

French media have noted a rise in antisemitic attacks and graffiti on the margins of the gilets jaunes protests, which began in November as a fuel tax revolt and turned into a wider anti-government, anti-elite movement. Some demonstrators have used antisemitic tropes to refer to Macron’s former job as a Rothschild investment banker, or made anti-Jewish salutes. 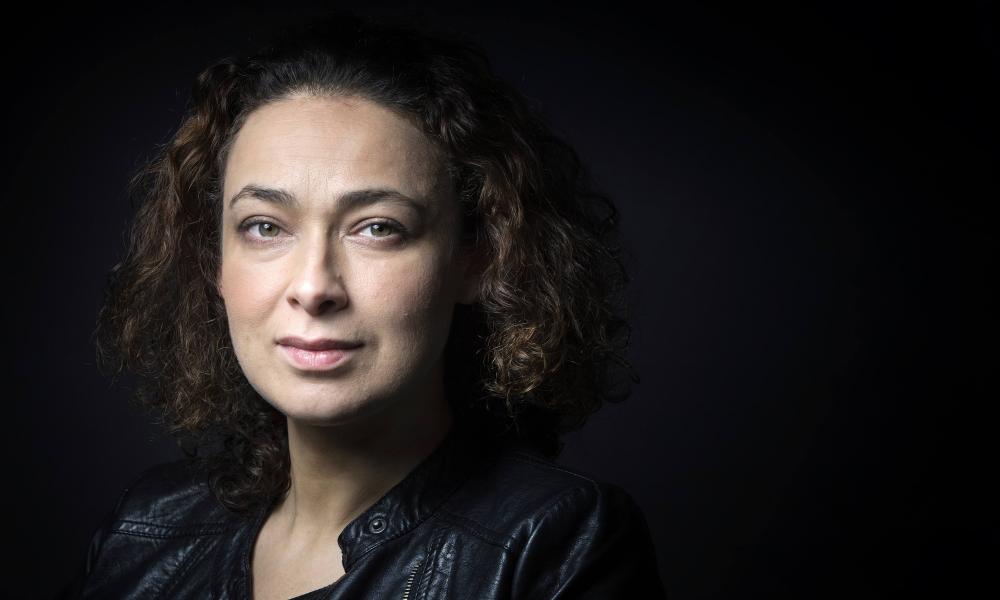 At the Paris demonstration, some carried placards saying “Fraternity”, “Enough is Enough” and “Exit hatred”.

Pauline Mandroux, an actor who also works in marketing in Paris, said: “I’m here to mark my support and solidarity – Jewish people in France should not have to carry this antisemitism on their own. We need to build a society where everyone is free to be who they are.

“I’m shocked by the antisemitism that has been growing. At first I thought it was isolated incidents, now I realise it’s a deep-seated problem, an intolerance that is getting worse. I hear more and more antisemitic comments made openly, as if people would be in agreement. It has to stop.”

Academics who have studied the gilets jaunes movement said the protests in themselves were not antisemitic but said such a broad movement, without clear leadership, had resulted in antisemitic and far-right acts on the edges of demonstrations.

“The yellow vests aren’t an antisemitic movement,” Jean-Yves Camus, of the Political Radicalisation Observatory in Paris, told AFP. “But it’s a leaderless, horizontal movement ... and extremist elements have been able to drown out the voices of its high-profile figures in the media.”

The Paris rabbi Delphine Horvilleur told Libération she had appealed to gilets jaunes protestors to stand up and say “not in my name” and she believed they would support the marches against antisemitism on Tuesday.

How the murders of two elderly Jewish women shook France

The rise in antisemitic attacks pre-dates the gilets jaunes movement. Last year, police recorded a 74% increase in reported anti-Jewish offences, causing alarm in a country that is home to the biggest Jewish population in Europe. But many said the statistics could be even higher because not all attacks were reported.

Macron called the latest antisemitic attacks “the absolute negation of who we are and what makes us a great nation” and said they would not be tolerated. On Tuesday, he appeared to rule out suggestions by an MP in his party that anti-Zionism should become an offence in France. Macron said the solution was instead standing together as a country and “educating” people.

ÉdouardPhilippe, the prime minister, told L’Express magazine: “Antisemitism is deeply rooted in French society. We would like to think otherwise, but it is a fact. We must be totally determined, I would say almost enraged, in our will to fight, with a clear awareness that this fight is an old one and will last a long time.”

There have been other marches against antisemitism in Paris in the past few years, most notably in spring 2018 after the murder of an 85-year-old Jewish woman, Mireille Knoll, in Paris. In 2006, the murder of a Jewish man, Ilan Halimi, who was tortured to death, caused a national outcry. This month, local officials preparing a memorial found that a tree planted in his memory had been chopped down in an antisemitic attack.