Who Was Martin Luther King Jr?

Who Was Martin Luther King Jr?

Legacy of MLK, 51 Years After His Assassination

It's been almost 51 years since the assassination of Martin Luther King Jr., the African American preacher who led a civil rights movement that changed the nation and reverberated around the world.

Martin Luther King Jr., a man who embodied the U.S. civil rights movement, was assassinated more than 50 years ago on April 4, 1968. Here are some key facts about his life.

Martin Luther King Jr. was born Jan. 15, 1929, in Atlanta, Georgia. He was the son of Martin Luther King Sr., a prominent local preacher and civil rights leader, and Alberta King, a former schoolteacher. King says he first became conscious of racism at age 6, when a white friend’s father wouldn’t allow his son from playing with him.

King rose to prominence in the mid-1950s when as a young preacher he led the successful drive to desegregate public buses in Montgomery, Alabama, forcing the city to end its practice of segregating black passengers. He organized protests throughout the 1950s and 1960s against Southern segregation in the struggle for black equality and voting rights.

King understood a key to success for the civil rights movement was a strategy of nonviolent protests, which he championed as an alternative to armed uprising. King has said he was inspired by the teachings of Indian leader Mahatma Gandhi. The movement was tested in places like Birmingham, Alabama, where police used attack dogs and fire hoses to disperse protesting schoolchildren and in Selma, Alabama, where a 1965 march is remembered as “Bloody Sunday” because police attacked protesters. 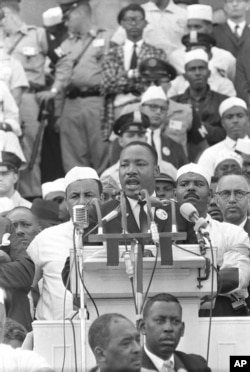 King’s famous “I Have a Dream” speech launched what had been a mostly black Southern movement into a nationwide civil rights campaign. By August 1963, the push for equality had grown significantly across the country, and 250,000 people, black and white, traveled to the nation’s capital to participate in the March on Washington. The protest was peaceful with no arrests.

The civil rights movement came to a crescendo in 1964, when President Lyndon Johnson signed the Civil Rights Act outlawing racial segregation in public places and King won the Nobel Peace Prize. The following year, the Voting Rights Act banned practices that were used to keep blacks from participating in elections.

On April 4, 1968, a single gunshot killed King on a motel balcony in Memphis, Tennessee, where he was supporting striking sanitation workers. James Earl Ray, a segregationist, pleaded guilty to shooting King and spent the rest of his life in prison. King, who was 39 when he died, gave a speech the night before his death that foreshadowed his assassination. “And I have seen the Promised Land. I may not get there with you, but I want you to know tonight that we as a people will get there,” he said.