Why Saudi Arabia hates Muslim women in the US Congress

It is no surprise the Saudi propaganda machine has come after US House Representatives Ilhan Omar and Rashida Tlaib.

by Hamid Dabashian hour ago 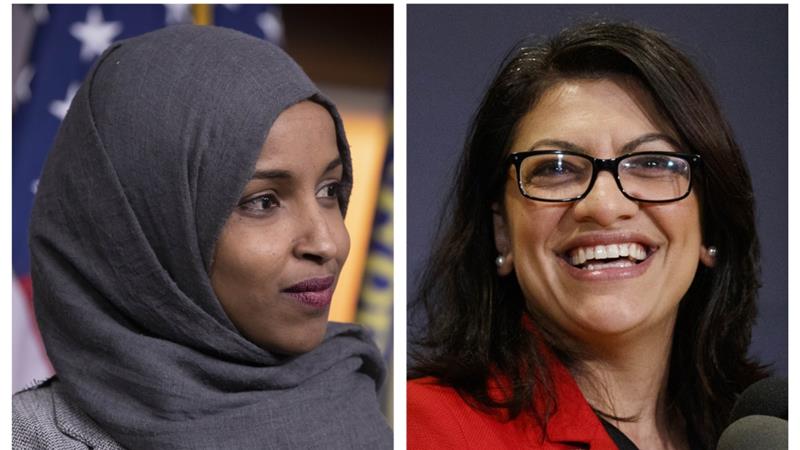 The two Muslim women at the centre of attention of the Saudi propaganda machinery are Palestinian American Rashida Tlaib, the newly elected US representative for Michigan's 13th congressional district, and Somali American Ilhan Omar, newly elected US representative for Minnesota's 5th congressional district.

Naturally, many racist conservatives in the United States were upset with the election of two Muslim women to the US Congress, and their run-of-the-mill xenophobia was expected. But the vitriol Saudi-affiliated media outlets and commentators spewed was indeed something new.

So, why would the Saudis, or any other tyranny in the Arab and Muslim world whose very existence is dependent on the benevolent generosity of the US military, pick up a fight with these two newly elected members of the US Congress?

Aren't the Saudis "the Custodians of the Two Noble Sanctuaries", as they call and thus congratulate themselves? Aren't they supposed to be protectors and supporters of all Muslims around the world?

According to the FP, "academics, media outlets, and commentators close to Persian Gulf governments have repeatedly accused Omar, Rashida Tlaib … and Abdul El-Sayed (who made a failed bid to become governor of Michigan) of being secret members of the Muslim Brotherhood who are hostile to the governments of Saudi Arabia and the UAE."

So, there you have it, the catchword: the Muslim Brotherhood.

The bugbear of the Muslim Brotherhood

The rise of the Muslim Brotherhood in the US as a scary monster predates the brief fortune of leading member and deposed Egyptian President Mohamed Morsi. In the Arab world, however, it was in the aftermath of the Arab Spring that the ruling regimes of Bahrain, Egypt, Syria, Saudi Arabia, and the UAE considered it their number one enemy. Because of Hamas (considered a branch of the organisation), Israel, too, joined these Arab states in their shared fear and loathing of political Islam. Through a deliberate and sanctioned ignorance, these governments are reducing the entire spectrum of resistance to their tyrannies to the Muslim Brotherhood.

Saudi Arabia and its allies, the UAE and Egypt in particular, have launched a vicious and indeed deadly campaign against the organisation. But this is not why they have come after the two US Congresswomen.

Another article published on the MinnPost explains: "Saudi loyalists aren't wrong that Omar is a persistent critic of the Saudi regime.  Recently, she's condemned the kingdom over two crises that are drawing international scrutiny to the secretive regime: the war in Yemen, and the death of journalist Jamal Khashoggi."

Thus for their outspokenness and open criticism, Omar and Tlaib are perceived as what Professor Mahmoud Mamdani of Colombia University calls "bad Muslims" in his remarkable study and subsequent book. By contrast, good Muslims - the ones Saudi Arabia et al like - are those silently watching it massacre Yemenis and cut Khashoggi to pieces while rushing to make ticket reservations for their Hajj pilgrimage.

Noting these vicious attacks against these young Muslim lawmakers in the new US Congress, Professor Mohammad H Fadel of the University of Toronto pointed out a crucial issue: "The shocking willingness to attack Muslim-Americans and Arab-Americans and embrace American Islamophobia reveal a deeper and more depressing state of affairs between the Arab world and its expatriates."

But why should Saudis and their allies be afraid of Muslim Americans? Well, they fear the Khashoggi effect - too many Muslims exposing and criticising tyranny.

If America could be beautiful

While the Saudis and their allies are scared witless of just two Muslim women, there are strong indications that more will be joining Congress in the coming years.

The 116th Congress, of which Omar and Tlaib are now members, is the most diverse in US history, with a record number of Latinos, African Americans, and Asian Americans and the first Muslim and Native American women to serve.

Before that, the 115th Congress, and before it, the 114th, were also considered most diverse in US history.

Increasing diversity of political representation in the US is a clear trend and Muslim Americans are very much part of it. Currently, there are some 3.4 million Muslims living in the US (just over one percent of the US population), but the young generation among them is emerging as exceptionally engaged in the public and political arenas.

The majority of Muslim Americans (76 percent) are first or second-generation immigrants, many of them (or their parents) hail from lands that suffer under despotic rulers. The Muslim American youth, being politically active at home, is also very much vocal about the tyranny in their homelands (just like Omar and Tlaib are, and just like Khashoggi attempted to be), readily exposing the deep corruption and the evil banalities of the regimes that rule them.

And this is what is scaring, not just the Saudi elites, but also the Egyptian, the Emirati, the Iranian, etc regimes in the Arab and Muslim worlds which detest freedom of expression. They would very much like these outspoken Muslim Americans back home where they can arrest, jail, torture, and murder them in peace.

Muslims living in the US are emerging as a peculiar vintage. Their small number is not a significant portion of the population but their cumulative resistance to the diabolicalIslamophobia that is coming their way in their adopted country is making them stronger citizens of a fragile democracy.

This historic opportunity has turned Muslims living in the US (but also in Canada, Europe, and Australia), where they face daily racist xenophobia, stronger agents in their respective histories, and as such, they are serious threats to the countries of their origins and the pathetic tyrants ruling them.

Today, not just Saudi Arabia, but equally Iran, Egypt, Turkey, or Pakistan have lost their exclusive claims on what it means to be a Muslim. Muslims around the globe who are not living under tyranny have equal, if not larger, claims on their faith. The theological and political implications of these small demographic changes are enormous. In this sense, the hatred of the Saudis towards two Muslim American congresswomen is just the tip of an iceberg.

It is not accidental that the selfsame Muslim women that the Saudis and their allies hate are targeted by the propaganda machinery of major Zionist outlets, which defame and demonise them because they take principled positions on Israel, criticising its policies and supporting the Boycott, Divestment Sanctions (BDS) movement.

The Saudi-Zionist alliance now runs deeply into the heart of the Arab and Muslim world. Ruling regimes from Saudi Arabia to Chad are putting all their eggs in the Zionist basket, hoping this would ensure their survival. Bad move. The power of the Zionists over the US politics is seriously challenged, and Muslims are part of a rising democratic will that will include the democratic aspirations of Muslim nations in their agendas.

In addition to the Zionist-instigated Islamophobia in Europe, Australia and North America, Muslims on these continents face another abusive danger: Racist Islamophobes abusing legitimate criticism of Arab and Muslim states in their warmongering schemes. The crucial question of women's rights is particularly vulnerable to this abuse and is often incorporated in the aggressive demonisation of not just the ruling regimes (who are responsible for the violations of these rights) but the entirety of Muslim and Arab cultures.

With Islamophobia from one side, bourgeois feminism at the service of war machines on the other, and the Saudi-Zionist alliance aiming to silence and kill voices of Muslim dissent, Muslim living in the US and elsewhere have their work cut out for them.

There is no underestimating the institutional and propaganda power of these nefarious forces. One must celebrate the election of two Muslim women to the US Congress, but one should not be too sanguine about their overnight success either. That the Islamophobes, xenophobes, the Saudis and their regional allies are alarmed is a good sign, but the battles ahead are mighty and mean. After all, for every Ilhan Omar and Rashida Tlaib in the US Congress there is a platoon of Nancy Pelosis and Chuck Schumers in the back pockets of regressive, Islamophobic and Zionist powers.