The next 15 megacities #6: New facilities by the Sabarmati will provide Ahmedabad with much-needed public space, but at what cost?

by Payal Mohta in Ahmedabad

Main image: The lower promenade by the the Sabarmati river in Ahmedabad, the largest city in the Indian state of Gujarat. Photograph: Dinesh Mehta/HCP

As the sun dips below the horizon, young lovers make themselves more comfortable on benches overlooking the Sabarmati river. Walkers stroll along the concrete promenades, and mothers enjoy a moment of respite under newly planted saplings while their children play in the adjoining gardens.

Few Ahmedabad residents could have imagined this scene a couple of decades ago. Back then the Gujarati city’s tidal river banks were lined with slum housing – precariously constructed on land polluted by industrial effluent and untreated sewage, and home to some of the most marginalised communities in the city.

This is a project just for beautification. No environmental assessment has been done Mahesh Pandya

Over the coming years this central location will transform yet further. Retaining walls have been built on both sides to narrow the river to stop it from flooding low-lying developments and eroding the riverbank, in a project likened to Joseph Bazalgette’s embankments along the Thames in London, or those along the Seine in Paris and Hudson in New York. The newly created land will be home to shopping malls, luxury hotels, floating restaurants, museums and sprawling parks.

Sign up for the Cityscape: the best of Guardian Cities every week

“The worst part of the city, with flowing gutters and illegal constructions, has been converted into an iconic infrastructure project,” says Vijay Nehra, the commissioner of Ahmedabad, whose municipal corporation has spent more than 15bn rupees (£170m) on the scheme.

The riverfront redevelopment model is being copied by several other Indian cities, from New Delhi to Mumbai, but as Ahmedabad’s population nears 10 million, not everyone is happy with the changes taking place – least of all the slum dwellers who have been relocated away from the city centre, the upstream farmers worried about their water supply and the environmentalists concerned the Sabarmati remains one of the country’s 15 most polluted rivers. 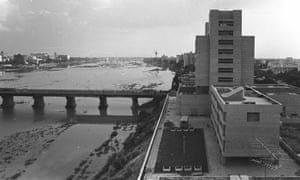 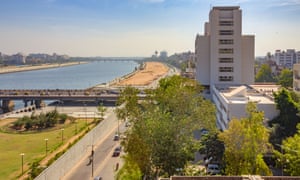 Before: the Sabarmati river in Ahmedabad in the 1980s. After: the same spot today.

The idea of a public riverfront was first proposed in the 1960s by the French architect Bernard Kohn, who was living in Ahmedabad at the time, as part of a vision for an ecological valley. Lack of funds meant it was shelved for the next 30 years.

It was given new life in a different form in the mid-90s when the Bharatiya Janata party (BJP) took charge of the Ahmedabad Municipal Corporation. (The BJP’s Narendra Modi, a local politician, is now India’s prime minister.) Bimal Patel – son of the late Hasmukh Patel, an influential architect whose buildings dot the city’s skyline – and his HCP Design and Project Managementfirm were hired to draw up a masterplan.

Bimal Patel’s proposal was on a much larger scale than its forerunners, but differed by proposing to sell 14% of the new 200 hectares of riverfront land to recover costs. “Mine was for the first time a self-financing model,” says Patel, 57, “without which the riverfront would never have seen the light of day.”

But before the first concrete could be poured, the tens of thousands of people who called the area home, many for three generations or more, had to be removed. The riverbed had become a dumping ground for the city’s waste and the area was rampant with disease, while floods frequently led to deaths and the destruction of dwellings. The clothes washers and small-scale farmers were dependent on the river directly, while others such as domestic workers and ragpickers relied on its central location. 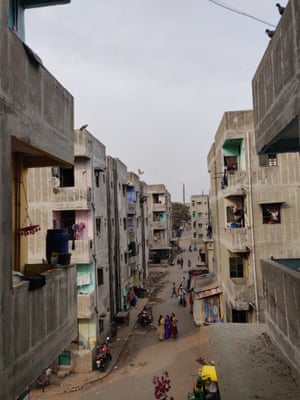 Government surveys conducted before the construction began in 2005 identified 11,000 families who would be displaced – although activists believe the actual number was three times higher.

The Sabarmati Riverfront Development Corporation spent some 11bn rupees (£124m) building new housing for those who would lose their homes, but Beena Jadhav, director of the Ahmedabad-based housing rights NGO Rahethan Adhikar Manch, says the process was mismanaged.

“Not a single family walked from their houses by the river to the ones given by the government without a phase of being homeless,” she says. “There were many demolitions without an eviction notice.”

Even those who left voluntarily found themselves unable to get work in the new location. Noorja Abdullah Pathan, 56, says: “The new government home felt like a private bungalow compared to where I lived before but I cannot find any work here. I can’t afford to travel for it either. I am always begging for food or dying of hunger. At least by the river I survived.”

The project has seen the tidal river, which was 679 metres across at its widest, narrowed to a regular 329 metres. “Pinching the river for a uniform width and building embankments have lowered the Sabarmati’s flood-carrying capacity,” says Mahesh Pandya, the founder of Paryavaran Mitra, an observer organisation for the UN Framework Convention On Climate Change. “This was always a project just for beautification. No environmental assessment has been done.”

Two sewage interceptor lines have been built along the reclaimed banks to stop untreated sewage from flowing into the river, but it continues to receive nearly 15% of the 960m litres of untreated sewage Ahmedabad produces each day.

Meanwhile, activists are worried that the water supply for farmers in drought-prone parts of Gujarat will be affected by the project. Water from the Narmada canal – a multipurpose dam project that irrigates more than 3,000 villages across the state – was used as part of the scheme, and levels of the dam have since been recorded at their lowest in 13 years. The state government has vowed to stop the city from using the Narmada’s water free of charge, and the Ahmedabad Municipal Corporation insists new treatment plants will prevent any untreated sewage from entering the river within three years. 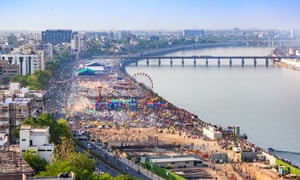 ‘A public space for 7 million’

Patel, though, considers his project to be on track. “With these homes along the river there was no way for the residents of Ahmedabad to access the waterfront,” he says. “The key objectives have always been to create a public realm along the river, clean the water and rehabilitate those affected by the project. Now a huge public space is available for 7 million people.”

But he cautions that the development is a long-term project. “The problems Indian cities face today are the challenges their European counterparts faced in the 19th century,” he says. “Their solutions, like controlling tidal rivers with embankments, remain the same.

“It took over 70 years to clean the Thames. I am not saying it will take that long for the Sabarmati, but developing a riverfront is a three-generation project.”