Disaster released a wave of orange sludge after a tailings dam burst at an iron ore mine, with scores of people still trapped

As many as 200 people are missing after three dams operated by the mining giant Vale collapsed in the Brazilian state of Minas Gerais, releasing a wave of red mining waste and prompting fears of widespread contamination.

At least 50 people died in the disaster on Friday, Avimar de Melo, mayor of the nearby town of Brumadinho told the Hoje em Dia newspaper. “We don’t have any more details because it’s all happening very quickly,” he said.

Brazilian television showed images of survivors being winched to safety by a helicopter after the disaster at the Feijão mine near Brumadinho, less than two hours from the state capital, Belo Horizonte.

Among those missing were 100 mine workers who were having lunch in an administrative area when it was hit by a torrent of sludge and water, said a fire brigade spokesman, Lieutenant Pedro Aihara.

“Our main worry now is to quickly find out where the missing people are,” Aihara said on GloboNews cable television channel.

Videos shared on social media showed houses buried in the mud and local media reported that the nearby Inhotim outdoor art complex had been evacuated though not affected. 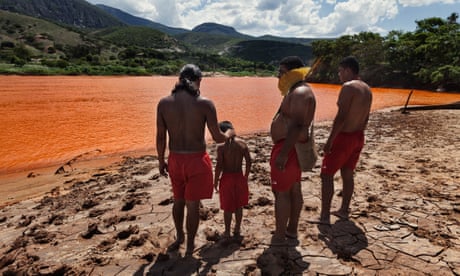 The dam collapse came less than four years after Brazil’s worst environmental disaster was caused by the failure of a tailings dam at Mariana in the same state. That dam was operated by Samarco, which at the time of the disaster was half-owned by Vale.

“I don’t have words to describe my suffering, my enormous sadness, my disappointment in what has just happened. It is beyond anything you can imagine,” Vale’s CEO, Fabio Schvartsman, said in an address on YouTube.

He said the company had made an “enormous effort” to make its tailings dams safe after the Mariana disaster. “The whole of Vale will do whatever is possible to help the people affected,” he said.

Fire brigades and the Minas Gerais civil defence authority were leading rescue efforts, the company said in a statement.

“There were employees in the administrative area, which was hit by rejects, indicating the possibility, still unconfirmed, of victims. Part of the community of Vila Ferteco was also hit. There is still no confirmation of the cause of the accident,” it said .

Brazil’s ministry of the environment said it had set up a crisis cabinet after the three dams broke. The environment minister, Ricardo Salles, and Eduardo Bim, head of the ministry’s environment agency Ibama are on their way to the scene.

“Our major concern at this moment is to attend any victims of this serious tragedy,” Brazil’s new president, Jair Bolsonaro, tweeted. “All reasonable measures are being taken.”

Bolsonaro told reporters in Brasília that he would fly to Minas Gerais on Saturday morning and fly over the region “so we can once again re-evaluate the damage and take all the reasonable measures to minimise the suffering of relatives and possible victims as well as the environmental issue”.

Bolsonaro has attacked environment agencies including Ibama for holding up development with what he describes as excessive licensing requirements and advocated freeing up mining in protected indigenous reserves.

Environmentalists said Brazil had failed to learn from the Mariana disaster, in which 375 families lost their homes, and are yet to be rehoused. The three companies which operated the Mariana dam – Samarco, Vale and the Australian mining giant BHP Billiton – spent more than $1bn on a huge clean-up and relief operation and paid millions of dollars in fines over the disaster. But no individual has been convicted.

“This new disaster with a mining waste tailings dam – this time in Brumadinho – is the sad consequence of a lesson not learnt by the Brazilian state and mining companies,” said Greenpeace Brasil’s campaigns director, Nilo D’Avila, in a statement. “Cases like these are not accidents but environmental crimes that should be investigated, punished and repaired.”