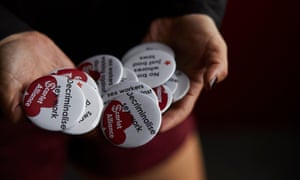 Sex workers are more likely to suffer poor health, violence and abuse in countries where their trade is criminalised, a major review has found.

The review, by researchers from the London School of Hygiene and Tropical Medicine, found that sex workers suffering repressive policing – including arrest, imprisonment and extortion by officers – were three times more likely to experience sexual or physical violence from a client and were twice as likely to have HIV or another sexually transmitted infection as those who lived in countries where sex work was tolerated

Sex workers who fear that they, or their clients, may be picked up by the police are more likely to engage in risky encounters, unable to take the time to talk to a client before getting into a car or negotiate terms in advance, the researchers found.

Their health and safety were at risk not only in countries where sex work was criminalised, but also in Canada, which has introduced the “Nordic model” pioneered by Sweden, under which the client can be arrested for a criminal offence, but not the sex worker.

Published in the journal PLOS Medicine, the paper by Lucy Platt, associate professor in public health epidemiology, and Pippa Grenfell, assistant professor of public health sociology, is a review of data from 33 countries. They included comments from sex workers who took part in some of the studies. 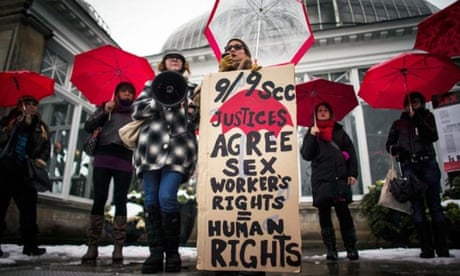 Canada passed a law in 2014 to make it illegal to pay for sex, but some sex workers say that has made their lives more risky.

“They couldn’t have designed a law better to make it less safe,” said one sex worker. “It’s like you have to hide out, you can’t talk to a guy, and there’s no discussion about what you’re willing to do and for how much. The negotiation has to take place afterwards, which is always so much scarier. It’s designed to set it up to be dangerous. I don’t think it was the original intention, but that’s what it does.”

Another woman working on the streets in Canada said she was no longer able to talk through the car window to ensure they felt safe. “Because of being so cold and being harassed, I got into a car where I normally wouldn’t have. The guy didn’t look at my face right away. And I just hopped in cause I was cold and tired of standing out there. And you know, he put something to my throat. And I had to do it for nothing.”

France, Iceland, Northern Ireland, Norway, the Republic of Ireland and Sweden also criminalise the client. Guatemala, Mexico, Turkey and the US state of Nevada have regulated sex work, which allows better conditions for some, but worse for the many who operate outside the regulated arrangements.

Criminalise the sex buyers, not the prostitutes

A man in the UK said the ideal situation was working from shared premises, where everybody had companionship and greater security. But, although buying and selling sexual services is legal, that can fall foul of the law. “Because of the legal situation, you have to be very, very careful. Because obviously it’s running a brothel, which has … really dangerous consequences these days,” he said.

New Zealand is the only country to have decriminalised sex work, in 2003, although it is not legal for migrants. Sex workers said they were more able to refuse clients and insist on condom use, while relationships with police were better. “We always have police coming up and down the street every night,” said one woman. “We’d even have them coming over to make sure that we were all right and making sure … that we’ve got minders and that they were taking registration plates and the identity of the clients. So … it changed the whole street, it’s changed everything.”

“Wider political action is required to tackle the inequalities, stigma and exclusion that sex workers face, not only within criminal justice systems but also in health, domestic violence, housing, welfare, employment, education and immigration sectors.”