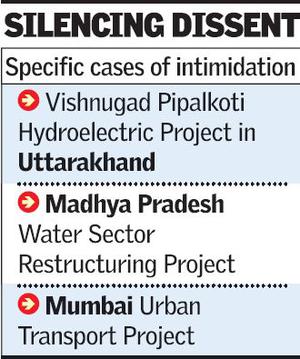 Indian government and company officials engaged in widespread use of intimidation, including threats of physical violence and death, against outspoken members of communities that stand to be displaced or otherwise affected by World Bank-financed projects, according to a scathing report this week from a major human rights group.

The 144-page Human Rights Watch (HRW) report, “At Your Own Risk: Reprisals against Critics of World Bank Group Projects,” detailed how governments and powerful companies in India and across the world have “threatened, intimidated, and misused criminal laws” against such persons even as the Bank and its private sector lending arm, the International Finance Corporation (IFC), “failed to take adequate steps to help create a safe environment in which people can express concern or criticism about projects.”

Specific cases of intimidation and threats against dissenting opinion that the report outlined include the Vishnugad Pipalkoti Hydroelectric Project in Uttarakhand, where community protestors were allegedly threatened with violence and death by officials of Tehri Hydro Development Corporation India Ltd; the Madhya Pradesh Water Sector Restructuring Project where community member Ram Sharan Gupta told HRW that he was threatened with violence and death after he brought a complaint to the Bank's Inspection Panel; and government’s jailing of a lead complainant who was protesting the Bank-financed Mumbai Urban Transport Project shortly after the Panel sent its report to the board in December 2005.

In at least one further case the HRW report said that in another region of India, a person who was set to be affected by a proposed project that was receiving IFC support was "publicly maligned" by local media, government officials, and other community members for opposing the project.

Notable mention was made too of the Indian government’s 2015 crackdown on foreign-funded NGOs, particularly Greenpeace, in whose case the report questioned whether there was a link to certain World Bank projects.

The report said, “Although there is no reason to suspect that the clampdown on NGOs, including Greenpeace, is a result of their resistance to any World Bank or IFC-financed projects, several of the groups named in the two reports have joined calls for the World Bank Group to withdraw support from Tata Mundra, an IFC-financed 4,000MW coal fired power plant in Gujarat, because of its environmental and human rights impacts.”

Responding to queries from The Hindu a World Bank Spokesperson said, “When allegations of reprisal are brought to our attention, we work, within the scope of our mandate, with appropriate parties to try to address them. Where links between reprisals and WBG-financed projects can be established, we have taken action as documented by past cases and we will continue to do so.”

He also drew attention to several cases where the Bank took action in the face of such complaints, for example suspending new lending over the eviction of landowners to make way for a property development in central in Phnom Penh, Cambodia, in 2011.

In a statement issued today the Bank noted that it was “in the process of reviewing, updating and strengthening its environmental and social safeguards,” even though this comes on the back of a leaked report of a draft safeguards framework last July suggesting that it was “watering down” environmental and community safeguards for its lending activities and possibly endangering the livelihoods of indigenous peoples and others worldwide.

>At the time The Hindu reported on a “before-versus-after” comparison of the Bank’s wording on safeguards, which showed that on involuntary resettlements and land acquisitions the matrix of evidence indicated that the policy may get weakened over questions of compensation.

It was noted then that since India is the Bank’s largest borrower-client worldwide such issues with environmental standards could, if they passed into statute, have a significant impact on the welfare of minority and indigenous communities in the country.