Do UN peacekeepers do more harm than good?

UN peacekeepers are supposed to help vulnerable communities but can their presence damage the countries they operate in?

UN peacekeepers are sent to some of the most war-ravaged countries on Earth, ostensibly to help them transition to peace.

But some stand accused of committing crimes against the very people they are supposed to protect.

According to a recent investigation by the Associated Press (AP), between 2004 and 2016, the United Nations received almost 2,000 allegations of sexual exploitation and abuse against its peacekeepers.

The UN says it has a zero tolerance policy on sexual exploitation and abuse, but survivors, activists, lawyers and human rights organisations say such crimes have been allowed to continue with impunity.

Through conversations with UN peacekeepers and officials, gender experts, academics, researchers and activists, as well as through an investigation of UN data, in this four-part series, we try to navigate these competing accounts to answer the question: How did some peacekeepers become predators?

In part three, we ask if the presence of a peacekeeping community can sometimes do the host nation more harm than good.

Read Part I: Why do some peacekeepers rape?

Read Part II: Is the UN sending the wrong people to keep the peace?

In her 2015 book, Peaceland, Severine Autesserre, a professor of political science at Barnard College of Columbia University in the US, writes about a "community of interveners for whom peace is either the primary objective (like peacekeepers) or part of a broader set of goals (such as diplomats or development workers)" who often exist in a parallel world to the people they are meant to serve.

She argues that the way in which this community lives, talks and collaborates with locals reinforces "a pervasive power disparity between the interveners and their intended beneficiaries".

The "peacekeeping economy" - in which millions of dollars arrive, circulate between external actors and rarely reach or benefit the local community - emboldens a sense of impunity and superiority among this community of interveners, says Marsha Henry, an associate professor at the London School of Economics' Gender Institute in the UK, pointing to how peacekeepers and the aid community often live privileged, if precarious, lives in an economy that caters more to their needs than to the development goals of the country they are in.

"You have immunity and privilege, and you fly business class, and you have privileges that you never had before, and quickly people begin to internalise this idea that the world is 'us' and 'them'," explains Paula Donovan, from Aids Free World, a US-based NGO that exposes injustice, abuse and inequality.

Kelly-Jo Bluen, a former project leader for international justice at the Institute for Justice and Reconciliation in South Africa, argues that peacekeepers often parachute in with little regard for the local population and with the notion that they are saviours. "The focus becomes one of violence 'out there' as opposed to the economies of violence and acts of sexual violence fostered and perpetrated by peacekeepers," she explains.

Interaction with the local population is often discouraged. But Henry argues that there should be more, not less, of it. When interaction does happen, it is often in the form of peacekeepers parading in their armoured vehicles and blue helmets, something she says furthers the "dehumanisation of the host population".

One peacekeeper in the Central African Republic, who did not want to give his name as he was not authorised to talk to the media, told Al Jazeera, that his battalion had been instructed not to talk to or engage with the local population. "It just creates the possibilities for the wrong things to happen … the next thing you know, we are accused of something," he says.

There is one particular economy that can be fed by the presence of peacekeepers.

In the International Organization journal article Peacekeeping, Compliance with International Norms, and Transactional Sex in Monrovia, published in late 2016, researchers found that more than 50 percent of women surveyed in the Liberian capital, Monrovia, had engaged in transactional sex. "A large majority - 75 percent - with UN peacekeeping," the report found.

Widely touted as the first quantitative study of the association between a UN peacekeeping operation and transactional sex, the report stated: "Transactional sex with UN personnel is a ubiquitous life experience among young women in Monrovia."

"The actions of UN peacekeepers are undermining the UN's broader peace-building goals in Liberia," it continued.

"When UNMIL (UN Mission in Liberia) withdraws, it will leave behind a distorted economy in which more than half Monrovia's young women will have been making their livelihoods by selling sex." 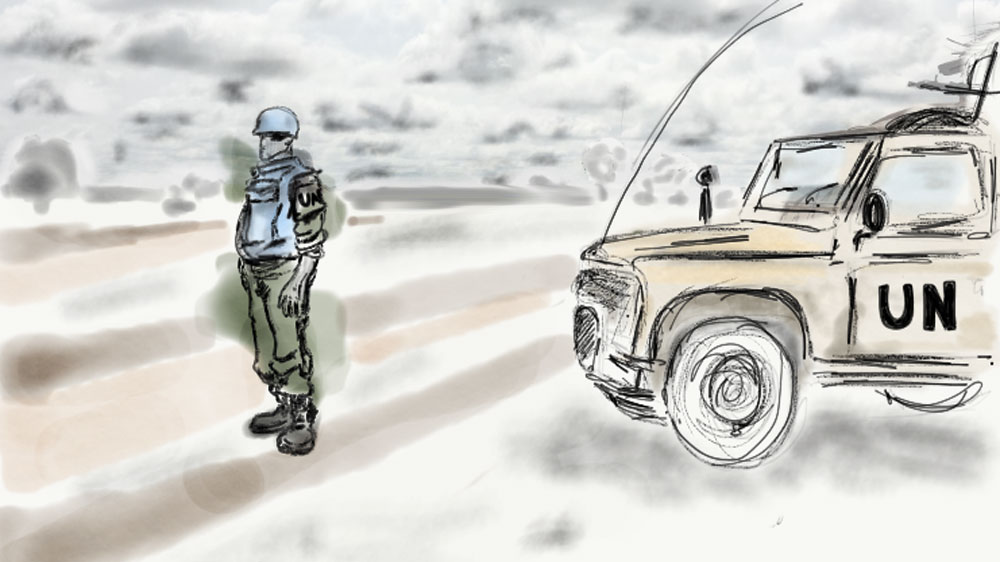 When several international aid agencies raised the alarm over abusive behaviour by UN peacekeepers in Cambodia between 1991 and 1993, including them visiting brothels where some of the prostitutes were underage, Yasushi Akashi, the then head of the UN mission to Cambodia (UNTAC), responded, "boys will be boys".

Reflecting on Akashi's comments, Sandra Whitworth, a professor of political science at York University in Toronto, Canada and author of Men, Militarism and UN Peacekeeping: A Gendered Analysis, writes that bringing peace to Cambodia "was accompanied [by] the deployment of soldiers who assumed that their prerogatives as militarised men included access to prostitutes, as well as a freedom to pursue, harass, and assault local women".

What constitutes exploitation and what abuse?

The UN discourages sexual relations between peacekeepers and the local community, arguing that it fosters unequal relations. While peacekeepers can be fired or repatriated for breaking UN code by engaging in sexual relations, including paying for sex (defined as exploitation by the UN) with a member of the local community, they can escape prosecution if the UN rules that it is not abuse (such as rape), or if prostitution is not illegal in the country.

[But] prostitution, or what some term sex work, is rarely, if ever, the first choice of those who are hungry and/or have families to support. It is almost always a last resort and peacekeepers must reflect on their positions of power and privilege.

It is up to the UN to decide whether the peacekeeper's behaviour is deemed exploitation or abuse.

Olivier Salgado, the spokesperson for the UN Department of Peacekeeping Operations, explains the distinction between the two.

"Sexual exploitation incorporates an inherently unequal power dynamic. Sexual abuse is a physical act committed whether by force or under unequal or coercive conditions. Both sexual exploitation and sexual abuse, however, violate the fundamental values of the United Nations and its standards of conduct."

"It is also important to note," he adds, "that in some instances, sexual exploitation may lead to sexual abuse and should, therefore, be given the utmost attention."

When in 2003, the then UN Secretary-General Kofi Annan introduced a zero tolerance policy on sexual abuse and exploitation, he also "discouraged" peacekeepers from engaging in sexual relations with beneficiaries of assistance "since they are based on inherently unequal power dynamics, [and] undermine the credibility and integrity of the work of the United Nations".

But academics and researchers disagree over the effectiveness of this approach.

The pressure on peacekeepers to remain celibate for long missions is "unreasonable", says Henry. "Many just don't see paying someone for sex as a major infraction … if they cover it up, it is because they know the UN doesn't like it," she adds.

Paul Higate, a lecturer at the school of sociology, politics and international studies at the University of Bristol in the UK, agrees that it is counterproductive to regulate or prohibit sexual relations between consenting adults.

But Gill Mathurin, communications director of Aids Free World, on the other hand, argues that it is "not possible for there to be consensual sex between UN peacekeepers and the people they are sent to serve".

Higate believes there needs to be greater clarity over how sexual relations are understood in the context of the power dynamics between peacekeepers and the host population.

"The situation of adults involved in survival prostitution should not be equated with the rape of a child," he says.

"[But] prostitution, or what some term sex work, is rarely, if ever, the first choice of those who are hungry and/or have families to support. It is almost always a last resort and peacekeepers must reflect on their positions of power and privilege."

Helen Wembe* was at home in the village of Bunia, in the eastern Democratic Republic of Congo, when a peacekeeper came to the door. Wembe, who was 13 years old at the time, explained that her grandmother wasn't home as she had gone to a funeral. The peacekeeper entered.

"He raped me. My brothers and sisters were in the house at the time," she says.

That was in 2004, the same year the international media reported that peacekeepers had been exchanging eggs, bananas, and peanut butter for sex with women and children in Wembe's village. The women involved said they were hungry, homeless or needed items for their babies or households.

Hundreds of children were subsequently born in Bunia. The UN introduced DNA testing to determine the paternity of these so-called "peacekeeper babies".

There are currently 22,016 peacekeepers in the DRC. Since 2015, there have been 47 allegations of sexual exploitation and abuse in the DRC. These include 83 peacekeepers and 65 survivors. To date, five of the accused have been jailed.