Worries over whether women are doing their ‘fair share’ has a clear impact on their health, according to a new analysis 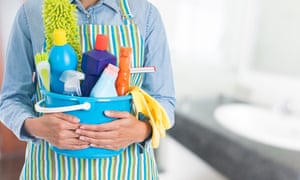 Guilt about not doing enough housework may be harming working women’s health, according to new analysis of data from the International Social Survey Programme.

Over a two-year period, women in 24 countries were asked to rate the amount of household chores they do each day in terms of their perceived “fair share”. They also ranked their physical health levels.

“Women who are not working a lot in the house are actually having poorer health than women who are working more household hours,” said Candice Thomas, the new paper’s co-author and an assistant professor of psychology at Saint Louis University. “How much you work at home is impacting health in a way we didn’t expect.”

According to the analysis, published in the academic journal Sex Roles: “Although the worst health was reported among women with higher work and household hours ... the relationship between job work hours and physical health is stronger when women are not contributing to the household workload as intensively.”

The authors suggest this link might be down to women feeling “guilt and empathy toward their spouses, as well as a transfer of stress from their spouses”.

According to Thomas, the research shows it is “how women feel about the distribution [of housework] that really matters. And I think guilt is something that probably plays a role in it – that you’re not doing your fair share.”

In the UK, averaging across all seven days of the week, women and men now spend a near-identical amount of time working when household chores are included (women: 7hr 10min per day; men: five minutes more). But men are paid for almost 25% more of their work (5hr 14min of their daily average, compared to 3hr 26min for women). And men are also paid better, both in the UK and across the world.

This data comes from a new working paper by by Oxford University’s Centre for Time Use Research (CTUR): a gender analysis of 75 national time-use surveys for people aged 20–59 from 24 countries over the last 58 years.

Am I the powerful person running a business, or am I the person incapable of keeping my house clean? Holly Marriott

The study shows that women in the UK now spend an average of 2hr 12min per day doing household chores, compared to men’s contribution of 1hr 9min.

“The convergence [between men and women’s work time] is only partial, but change is happening,” said Prof Jonathan Gershuny, head of the CTUR. “The public policy issue is how far the state is going to go to make sure this collective effort on the part of women does not lead to the punishment of women in terms of power and influence.”

The unequal distribution of unpaid work between men and women is one of the most important gender equality issues in many countries, according to a 2017 OECD report which cites its impact on pay gaps and career progression.

A recent analysis by the Financial Times found women accounted for just a quarter of senior staff at 50 of the world’s biggest banks, insurers and asset managers – a proportion that has improved only slightly since 2014.

The unequal distribution of labour has also been found to have a wider economic impact, with one recent study suggesting the US economy would improve significantly if men took on more of the housework.

Across the 24 countries included in the CTUR analysis, women are still typically taking on around 65% of the housework load, down from 85% in the 1960s – despite having increased their average paid working hours by as much as 47% (UK), 115% (Denmark) and 215% (Holland) over broadly the same period.

While more women are in paid work than ever before, for many people the traditional, archaic ideas of what a man and women “should” do in the household linger on.

“This guilt is linked to some expectations of what women are ‘supposed’ to do, even if they don’t agree with it,” said Melissa Milkie, a sociologist specialising in gender at the University of Toronto. “Although women and men’s roles are much more similar than they used to be, the expectations lag to some degree – we’re still stuck culturally. This may be true for men too, in that they still have to be breadwinners.” 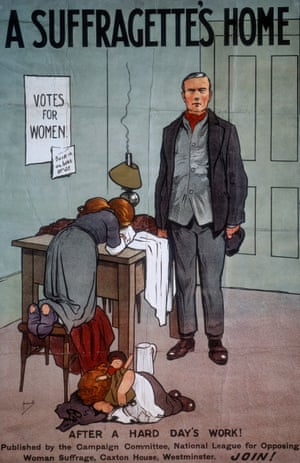 At 31, Holly Marriott is the founder and CEO of her own company, but still finds herself constantly grappling with a question of her identity: “Am I the powerful person running a business, or am I the person incapable of keeping my house clean?”

Marriott lives with her partner in Norfolk, and because of work commitments feels she isn’t able to take on her share of the household work. “It’s classic house pride: ‘I’m a woman – I should be able to keep a house clean.’ But I don’t have time to do that.”

The feeling of guilt is something Marriott can’t seem to shake off – even though she is the higher earner in the household. “I feel like I should be able to do more, even though I work long hours. I think it’s related to traditional roles: even though my role has changed and I’m working flat-out, I feel that I need to keep things tidy. It’s the whole thing of taking an equal amount of weight. I don’t because I haven’t got time to – and that bothers me.”

According to Gershuny, society’s ingrained ideas are the very things that maintain inequality in the workplace. “It’s this notion of fairness within the household that generates the societal level of unfairness manifested by the wage gap. For example, if you are doing more of the childcare, that means you shouldn’t be working at your job as well,” he said.

“Women are still doing the double shift of a job and most of the housework, plus caring responsibilities – and it leaves a lot of women knackered,” said Frances O’Grady, the first female general secretary of the UK’s Trades Union Congress.

“This means women have less leisure time than men, and fewer opportunities to network. For example, it’s harder for women to hang on after work to build contacts if they want to go for promotion – all of these things that we know make a difference are much tougher for women.”