How to stop the global inequality machine

How to stop the global inequality machine

If capitalism is going to be globalised, it makes sense to globalise the rules and standards that protect people as well 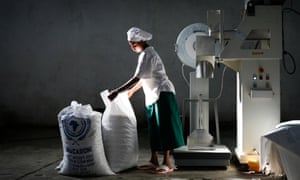 Basic income isn’t just a nice idea. It's a birthright

When the UN unveiled the new sustainable development goals two years ago, it was the one on inequality that captured everyone’s attention. Goal 10 – “reduce income inequality within and among countries” – was let in at the 11th hour after a long fight by civil society groups in the face of fierce resistance.

And it’s a timely intervention. Income inequality within countries has increased (pdf) virtually everywhere as a result of globalisation. And over the past 50 years the per capita income gap between the global north and south has roughly tripled in size, according to World Bank data.

Reversing these trends is crucial to restoring stability to a world shot through with crises. Goal 10 calls for a number of important reforms: improving social protections, reducing fees on migrant remittances, regulating global financial markets, and so on. But one stands out as particularly compelling, and that is the call for better wages.

This move vindicates a longstanding demand by developing countries. For decades, a group of scholars from the south have argued that the global wage gap is a major driver of inequality between poor countries and rich countries. And they don’t just mean the obvious fact that different wages translate into different standards of living. They mean that, through the mechanism of international trade, the wage gap also actively produces inequality.

It was the Egyptian economist Samir Amin – a well-known critic of neocolonialism – who first articulated this argument in the 1970s. He noticed that if we look at the labour that goes into producing goods for trade between south and north, we see that workers in the south are paid much less than their northern counterparts - even when adjusted for productivity or units of output per hour. This means that when the north buys goods from the south, they pay far less than those goods would otherwise be worth. In other words, the north effectively siphons uncompensated value out of the south – it buys cheap and sells dear. But when the south buys goods from the north, on the other hand, they have to shell out for the north’s comparatively high wages.

Amin called this “unequal exchange”, and described it as a hidden transfer of value from south to north.

How big is this transfer, exactly? Amin suggested we might calculate the scale of unequal exchange by comparing the south’s existing earnings through trade to what they would be earning if we lived in a fairer world – one where the labour that goes into producing goods for trade was paid equal wages for equal productivity. Using this method, Amin calculated that in the 1960s, at the end of the colonial period, the south was transferring about $22bn to the north each year, or $160bn (£123bn) in today’s dollars – twice the amount of aid and foreign investment they were receiving during the same period.

Following this logic, the scale of unequal exchange has only worsened over the intervening decades. Economists Zak Cope and Timothy Kerswell recently updated Amin’s calculations for 2012, and found that the south’s transfers due to unequal exchange had risen to an eye-popping $1.46tn (£1.13tn) per year, outstripping foreign aid by a factor of 11.

This is a conservative estimate, they add. It assumes that southern workers are far less productive than their northern counterparts; but the productivity gap may not be as big as we think. In fact, southern workers are probably at least as productive since these days many of them work in foreign-owned factories (think of Apple’s iPad factories) with highly efficient technology and rigid Taylorist rules, designed to extract as much as possible from every movement. If this is true, then the hidden transfer of value may be as large as $4.9tn (£3.8tn) each year.

Most neoclassical economists don’t see this as a problem. It’s only natural, they say, that workers in poor countries like Bangladesh earn less than workers in rich countries like Britain. In a world of free movement we might reach wage equilibrium, but in a world of rigid borders wages will fall in line with national economies.

This makes intuitive sense, on the face of it. But the problem with this approach is that it ignores the political forces that determine wages. It’s easy to see how this works in our own countries. We know that institutional sexism and racism keep the wages of women and ethnic minorities artificially low. And we know that wages go down when right-wing politicians pass anti-union legislation or cut welfare and working standards. And then there are extreme examples like apartheid South Africa, where the whole legal regime was designed to keep African labour cheap and exploitable, allowing the white minority to pump uncompensated value out of black bodies for their own enrichment.

The same thing happens on the international stage. Take colonialism, for example. Colonial policy in most countries was designed to force people into the labour market, by kicking them off their land or imposing crushing taxes, leaving them with no choice but to work in European industries where employers could get away with paying rock bottom wages – when they paid wages at all. And because colonial powers could dictate the rules of trade, they were able to depress the prices of exports from their colonies, which in turn put downward pressure on wages.

After colonialism, western powers often intervened to topplepro-worker leaders in the south – like Salvador Allende, Mohammad Mossadegh, and Jacobo Árbenz – replacing them with rulers who would keep labour cheap and exploitable. During the 1980s and 1990s, structural adjustment programmes imposed by the IMF caused wages to collapseacross the south. Today, many trade agreements compel developing countries to restrict unions and worker protections. And because globalisation allows companies to move easily across borders, employers can chill their workers’ wage demands by threatening to pull up stakes and move somewhere cheaper.

All of this conspires to keep wages in the south artificially low. And it doesn’t help that developing countries have the deck stacked against them at the World Bank, the IMF and the WTO. Because rich countries have all the powerin these institutions, they get to make the rules that shape export prices and wages in the rest of the world.

The point is that wages are not somehow naturally low in the south – they have been made low by design. Wages are an effect of power.

Goal 10 understands this, and takes steps in the right direction. For example, it highlights the crucial fact that developing countries need a real voice at the World Bank, the IMF, and the WTO, which would allow them to negotiate for policies that protect their workers and treat their exports fairly. It also calls for easier movement of labour across borders. But aside from this it is vague on how we should go about bettering wages in the south.

There’s an obvious solution: a global minimum wage. If capitalism is going to be globalised, it makes sense that we should globalise the rules and standards that protect people from it as well. Economist Thomas Palley recommends a floor set at 50% of each country’s median wage, so it would be tailored to local economic conditions and cause minimum disruption to comparative advantage. The International Labour Organization has already proven that they have the capacity to manage such a system. And it would make good sense to couple it with a universal basic income. By allowing people to opt out of exploitative jobs, a basic income would force employers to raise wages – and would provide a crucial cushion for the workers who will soon be displaced by the rising tide of automation.

These ideas are not only feasible, they are quickly gaining traction. Implementing them will require a political struggle, to be sure. But if we want to stop the global inequality machine, it’s a battle we’ll have to fight.