Soaring crime, hyperinflation, food shortages... Established democracies are not supposed to implode like this. How did post-Chavez Venezuela go from the richest economy in South America to the brink of social and financial ruin?

Max Fisher,Amanda TaubSunday 21 May 2017 17:07 960shares57 commentsClick to follow The Independent 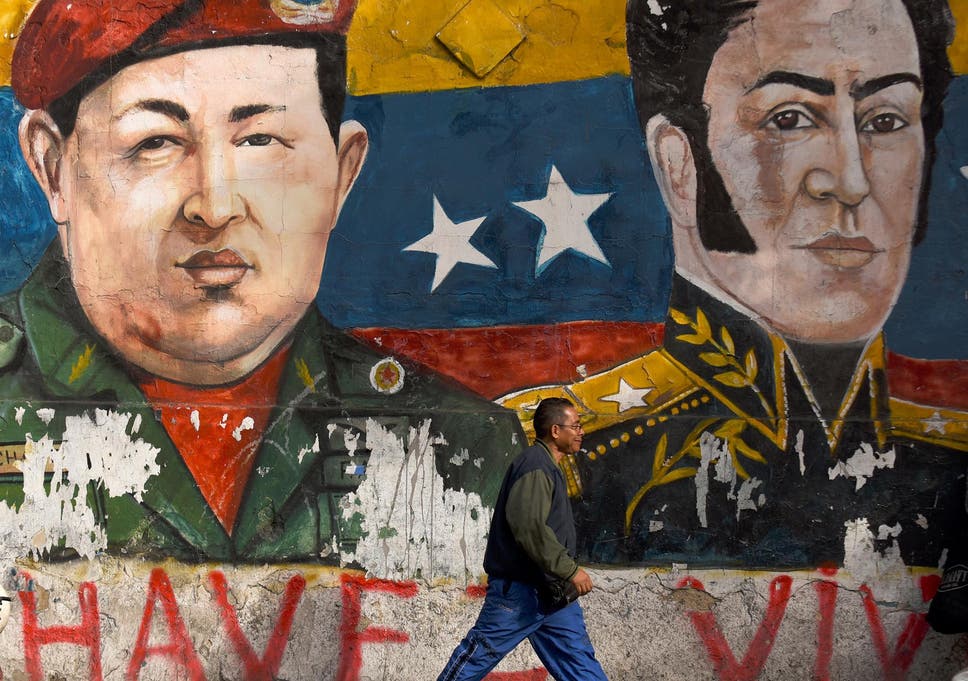 Venezuela, by the numbers, resembles a country hit by civil war. Its economy, once Latin America’s richest, is estimated to have shrunk by 10 per cent last year – worse even than Syria’s. GDP shrank by 19 per cent. The South American country also has the world’s worst inflation at more than 700 per cent (nearly double that of second-ranked South Sudan), rendering its currency almost worthless. In a country with the world’s largest proven oil reserves, food has grown so scarce that three in four citizens report involuntary weight loss, averaging 19 pounds in a year.

City streets are marked by black markets and violence. The last reported murder rate, in 2014, was equivalent to the civilian casualty rate in 2004 Iraq.

Its democracy, long a point of pride, became the oldest to collapse into authoritarianism since the Second World War. Power grabs, most recently to replace the constitution, have led to protests and crackdowns that have killed dozens just this month.

Established democracies are not supposed to implode like this. Steven Levitsky, a Harvard University political scientist, says Venezuela is one of only “four or five, ever”. Among those, none was as wealthy or fell so far. “In most cases,” he says, “the regime quits before it gets this bad.”

Venezuela’s crisis came through a series of steps whose progression is clear in retrospect, and some of which initially proved popular.

A two-party establishment, ready to break

At democracy’s founding, in 1958, the country’s three leading parties, later narrowed to two, agreed to share power among themselves and oil revenue among their constituents. Their pact, meant to preserve democracy, came to dominate it. Party elites picked candidates and blocked outsiders, making politics less responsive. The agreement to share wealth fostered corruption.pala 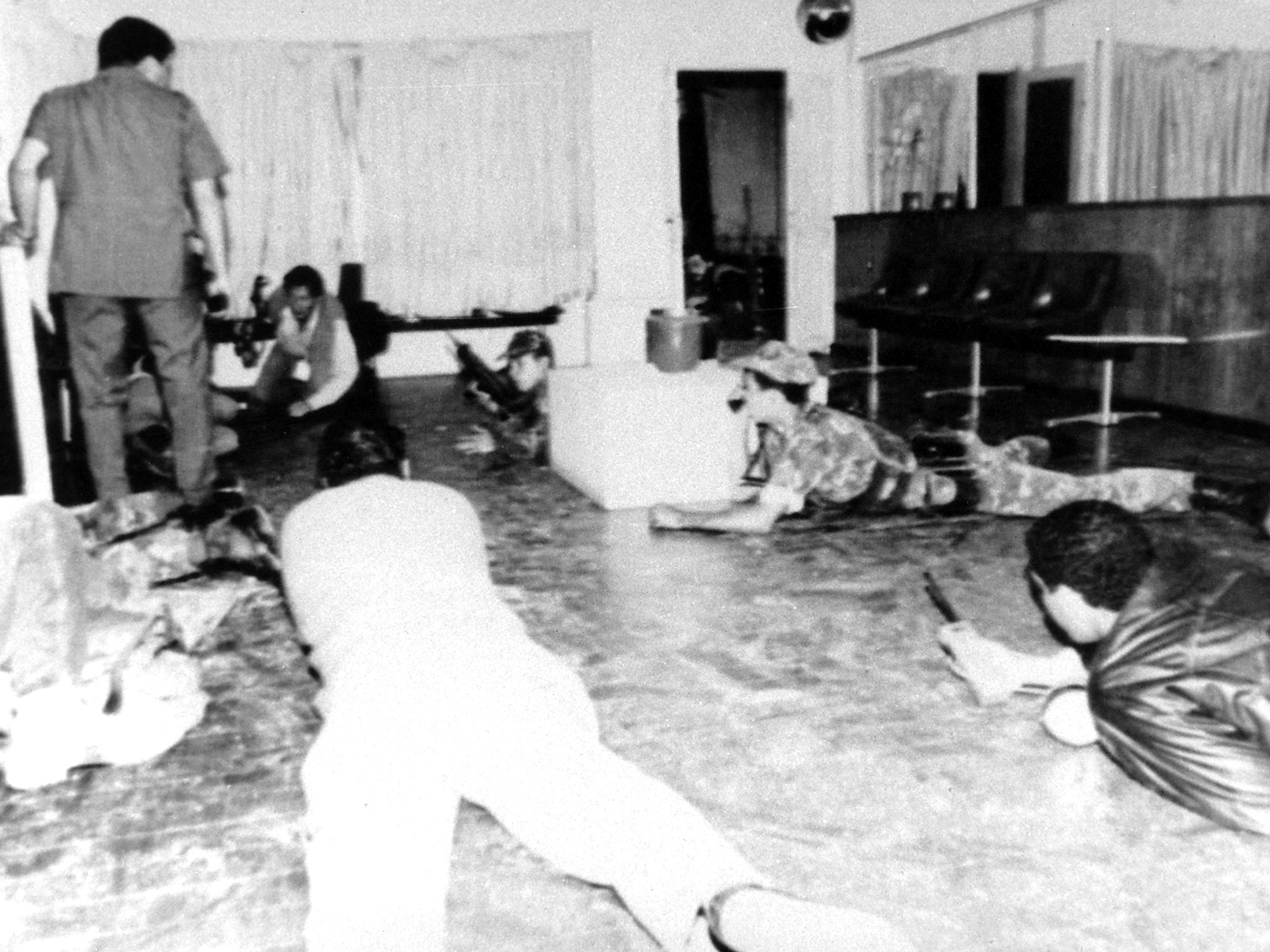 Economic shocks in the 1980s led many Venezuelans to conclude the system was rigged against them. In 1992, leftist military officers, led by Lt Col Hugo Chavez, attempted a coup. They failed and were imprisoned, but their anti-establishment message resonated, catapulting Chavez to stardom.

The government instituted a series of reforms that were intended to save the two-party system, but that may have doomed it. A loosening of election rules allowed outside parties to break in.

The President freed Chavez, hoping to demonstrate tolerance. But the economy worsened. Chávez ran for president in 1998. His populist message of returning power to the people won him victory.

Populism’s unwinnable war with the state

Despite Chavez’s victory, the two parties still dominated government institutions, which he saw as antagonists or even potential threats.He passed a new constitution and purged government jobs. Some moves were broadly popular, like judicial reforms that reduced corruption. Others, like abolishing the legislature’s upper house, seemed to have a broader aim. 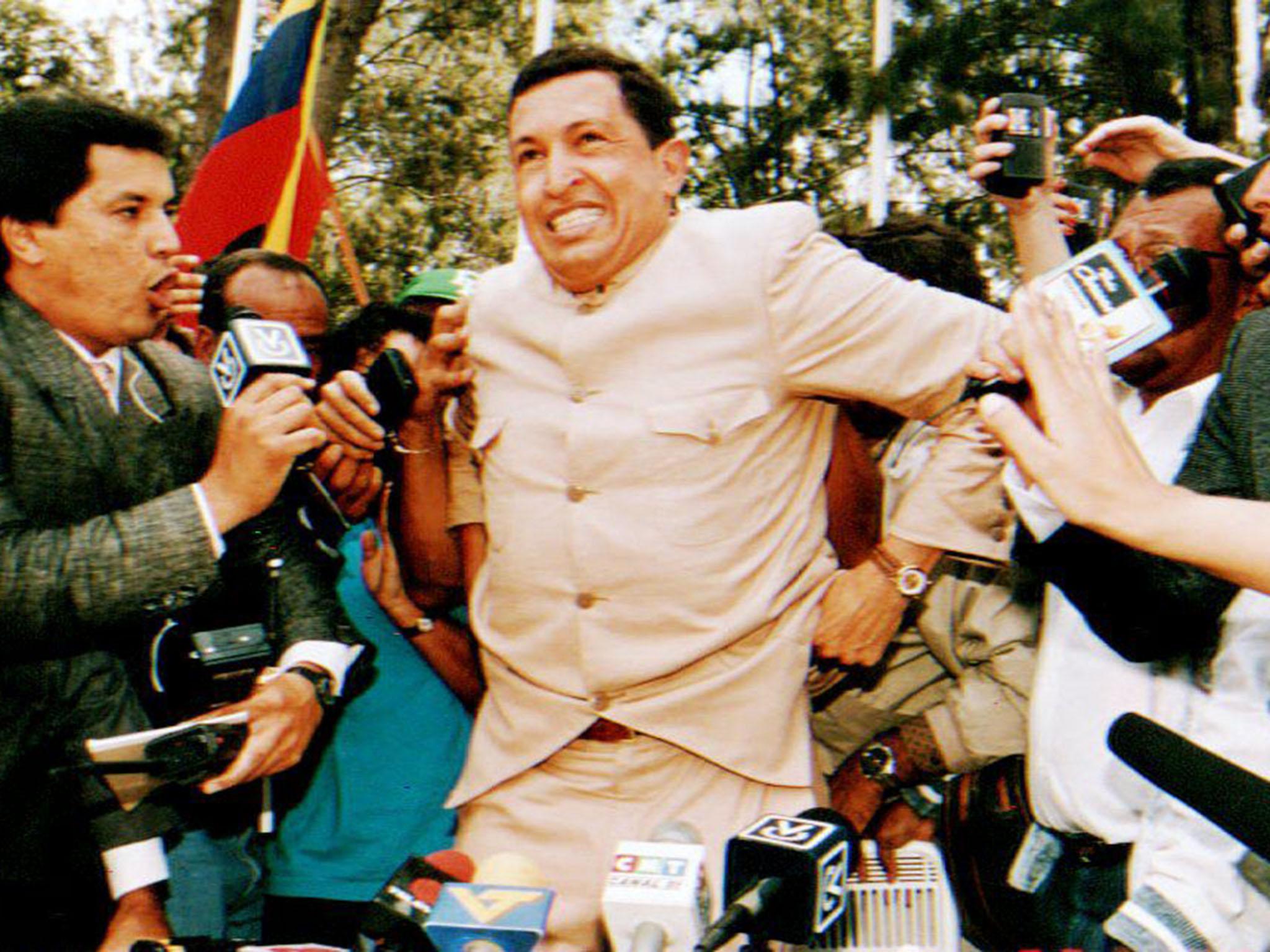 “He was reducing potential checks on his authority,” says John Carey, a Dartmouth College political scientist. Beneath the revolutionary language was “pretty savvy institutional engineering”.

Distrust of institutions often leads populists, who see themselves as the people’s true champion, to consolidate power. But institutions sometimes resist, leading to tit-for-tat conflicts that can weaken both sides.

“Even before the economic crisis, you have two things that political scientists all agree are the least sustainable bases for power, personalism and petroleum,” Levitsky says, referring to the style of government that consolidates power under a single leader. 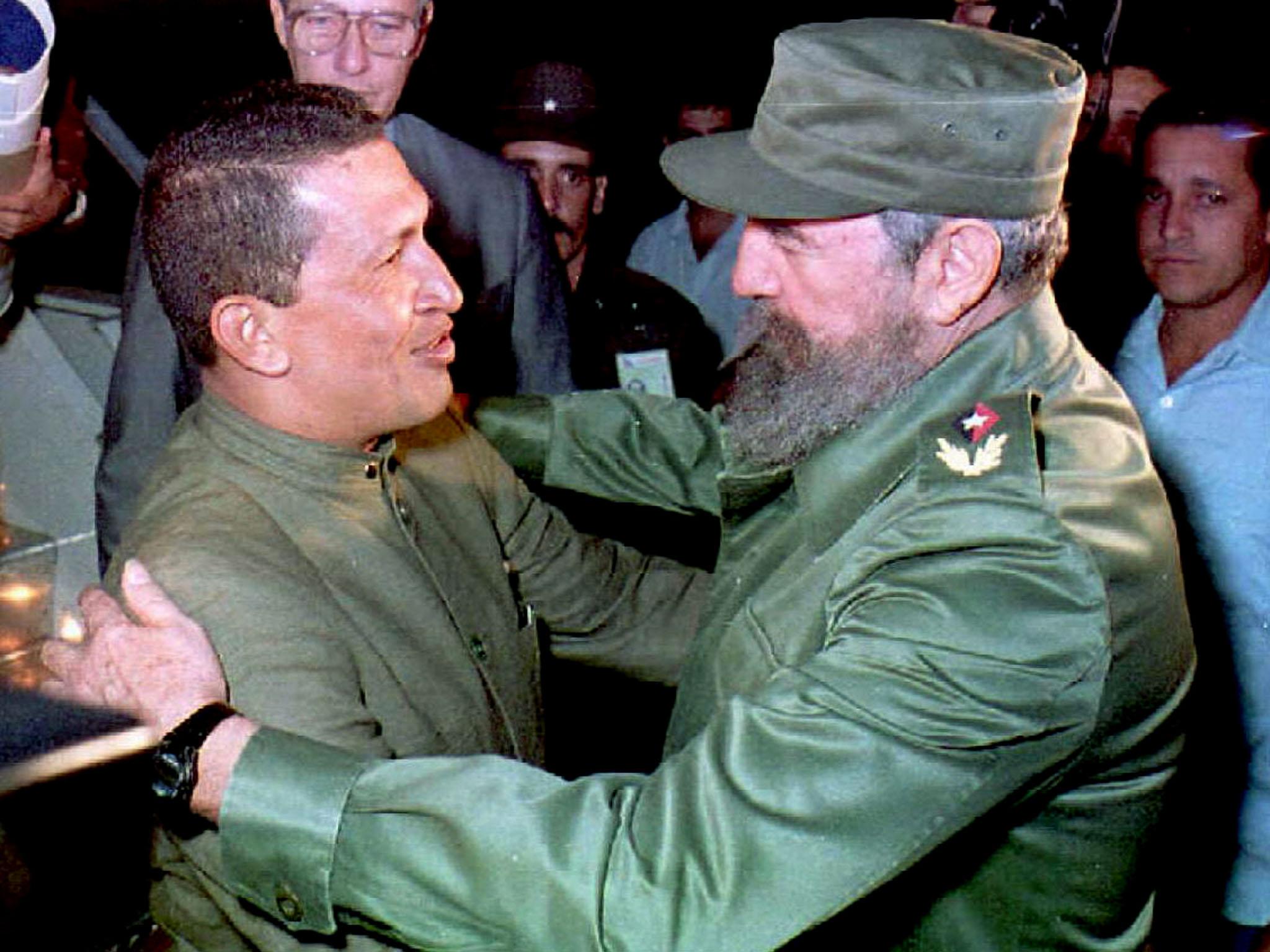 When members of the business and political establishment objected to a series of executive decrees in 2001, Chavez declared them enemies of the people’s revolution.

Because populism describes a world divided between the righteous people and the corrupt elite, each round of confrontation, by drawing hard lines between legitimate and illegitimate points of view, can polarise society. Supporters and opponents of a leader like Chavez come to see each other as locked in a high-stakes struggle, justifying extreme action.

A coup escalates conflict beyond ideology

In 2002, amid an economic downturn, outrage against Chavez’s policies swelled into protests that threatened to overwhelm the presidential palace. When he ordered the military to restore order, it instead arrested him and installed an interim leader.

Chavez’s foreign policy shifts, aligning with Cuba and arming Colombian insurgents, had angered some military leaders. His war on the elites turned out to carry risks. 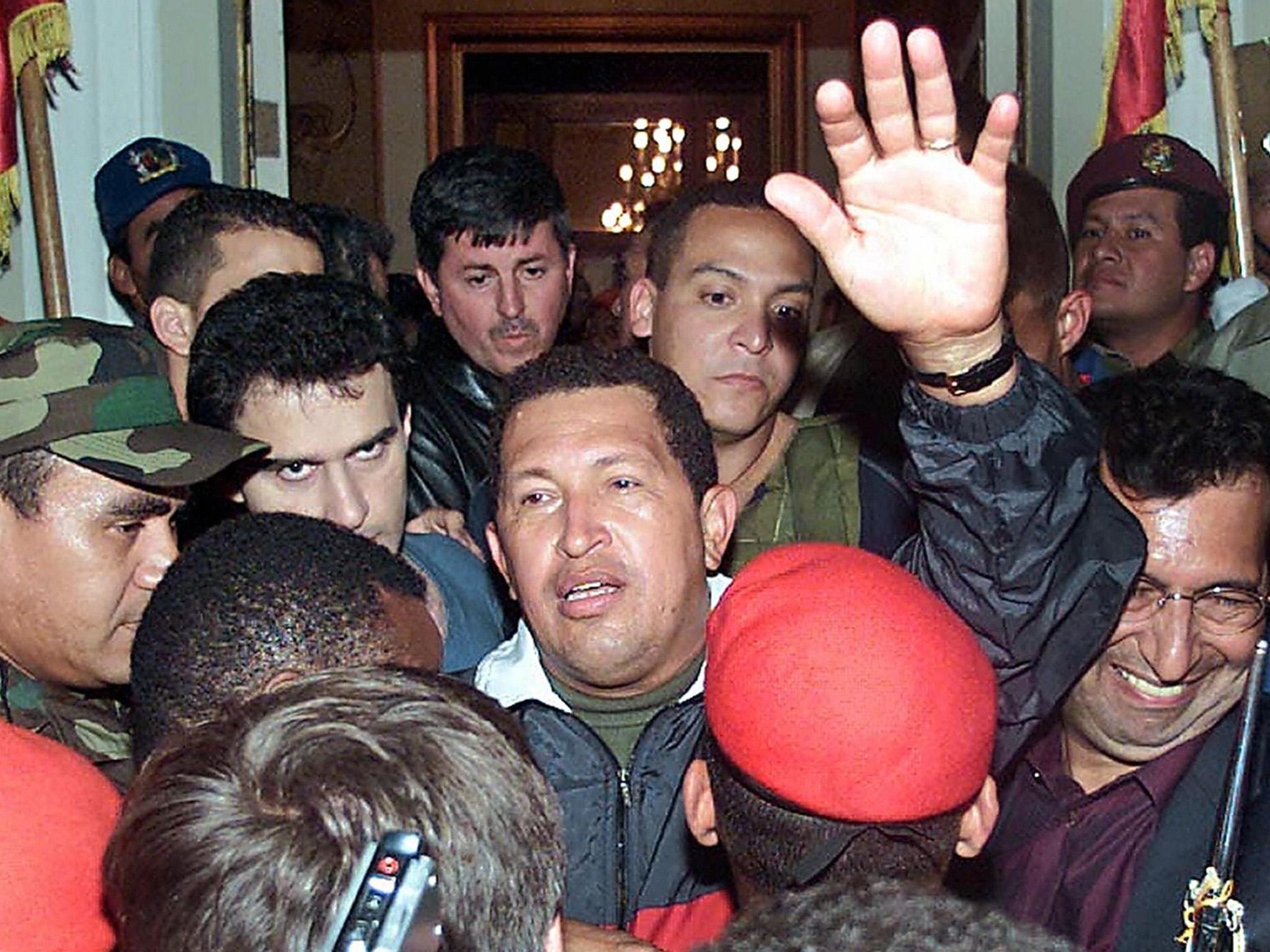 The coup leaders overstepped, dissolving the constitution and legislature, sparking counterprotests that quickly returned Chavez to power. But his message of a revolutionary struggle against internal enemies no longer felt like a metaphor for reducing poverty. Carey calls it a “hugely polarising moment” that allowed Chávez to portray the opposition as “trying to sell Venezuelan interests out”.

He and his supporters now saw politics as a zero-sum battle for survival. Independent institutions came to be seen as sources of intolerable danger. The licenses of critical media outlets were suspended. When labour unions protested, they were weakened by blacklists or replaced outright. When courts challenged Chavez, he gutted them, suspending unfriendly judges and packing the supreme court with loyalists. The result was intense polarisation between two segments of society who now saw each other as existential threats, destroying any possibility of compromise. 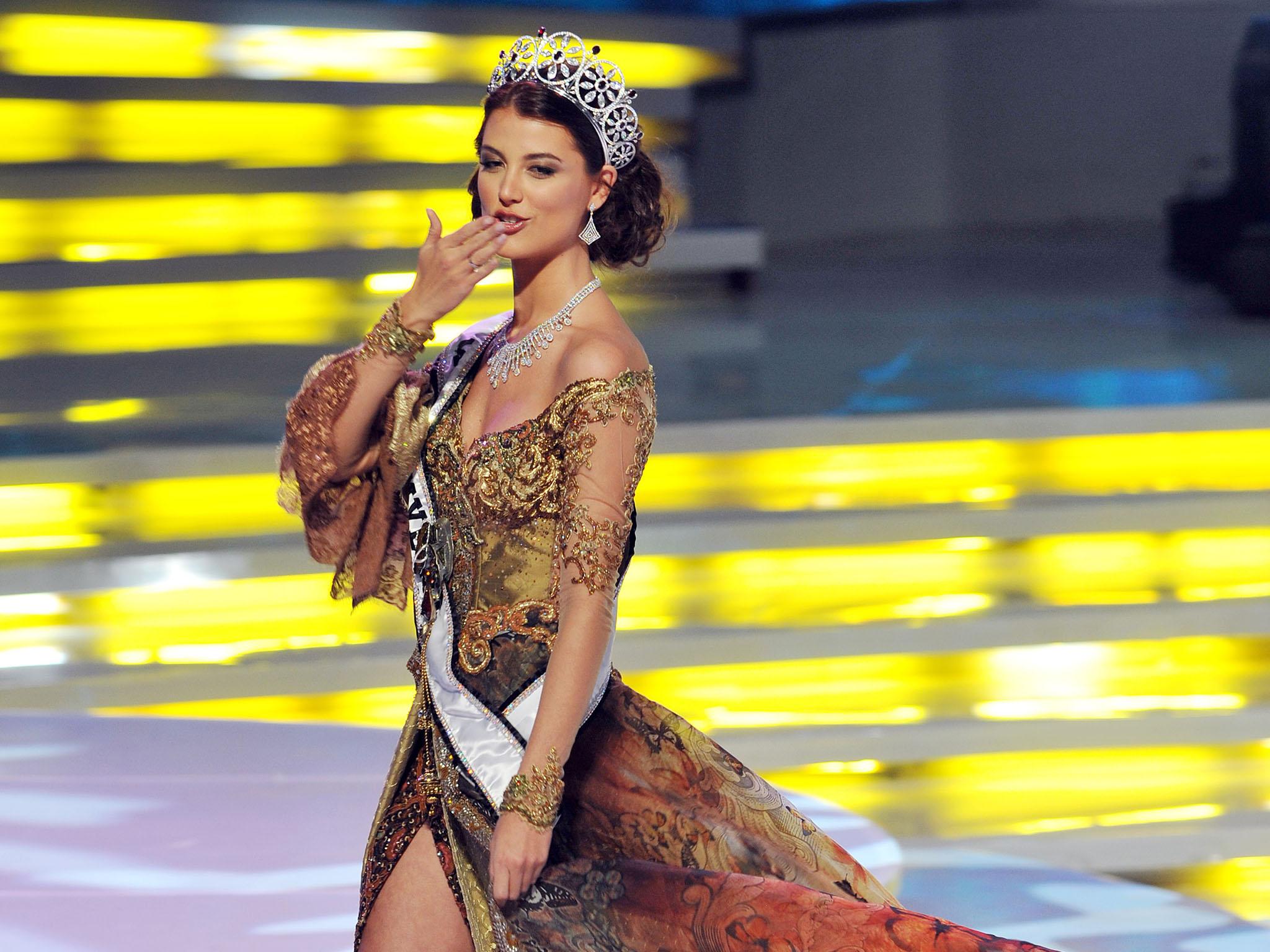 Shortly after the coup, Chavez faced another battle that would prove just as fateful. Workers went on strike at the state-run oil firm, Petróleos de Venezuela, or PDVSA, which he had long denounced for its associations with business elites and the United States. The strike threatened to destroy the economy and Chavez’s presidency. But it also presented an opportunity to stave off another uprising.

After the strike collapsed, he fired 18,000 PDVSA workers, many of them skilled technicians and managers, and replaced them with some 100,000 supporters. Much of the firm’s operating budget was diverted into programmes for Chavez’s political base, payoffs for government cronies and subsidies to keep his promise of affordable food.

In 2011, $500m (£385m) from a PDVSA pension fund found its way into a pyramid scheme run by government-linked financiers, none of whom faced prosecution. After running on smashing the corrupt elite, Chavez had merely established his own. 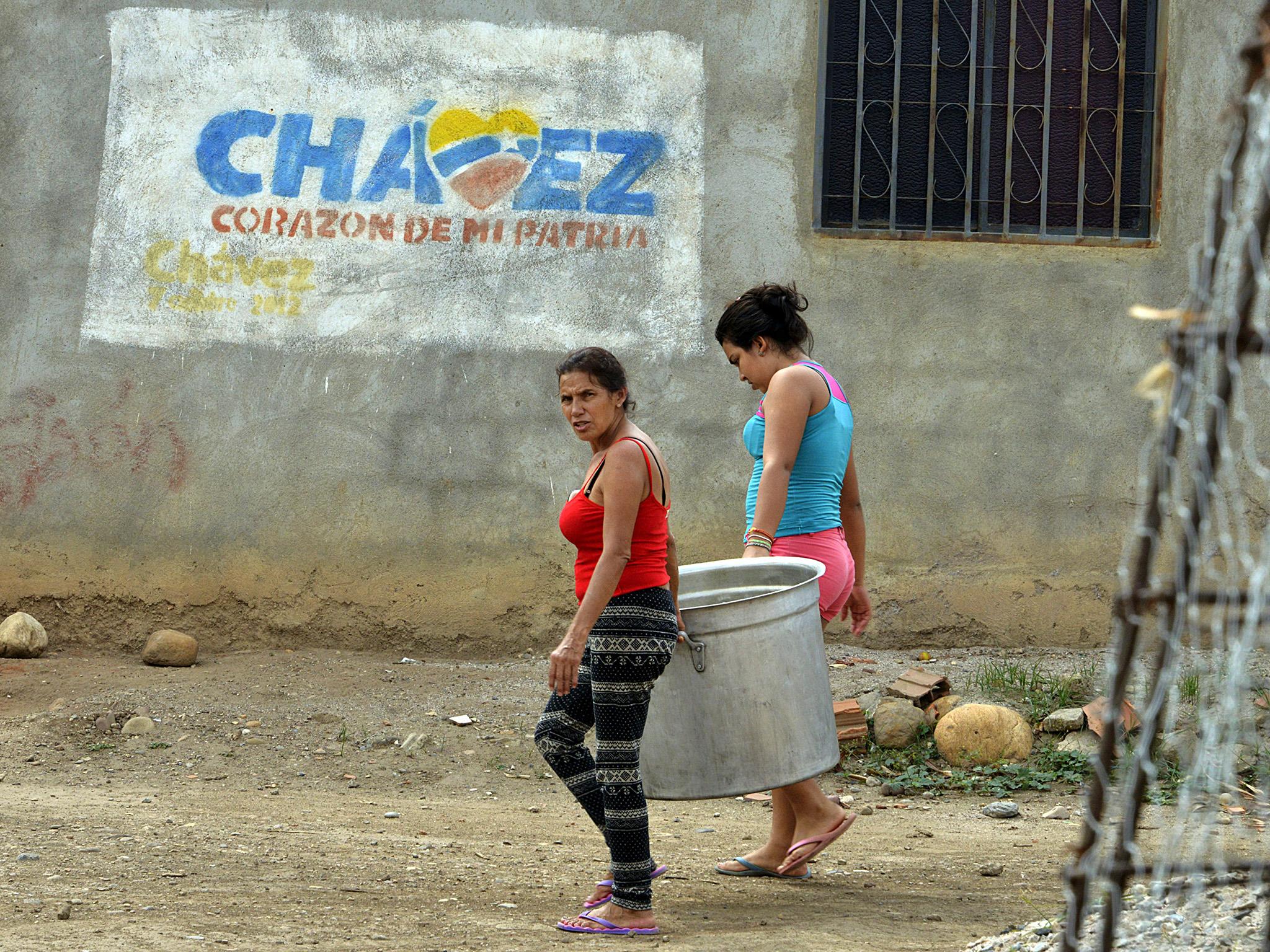 As an oil company, PDVSA was ruined. Production dropped despite a global boom in oil prices. The injury rate, measured in lost man-hours, more than tripled. In 2012, a refinery exploded, killing at least 40 and causing $1.7bn in damage, suggesting that even maintenance budgets had been siphoned off.

Its cash reserves depleted and development projects stalled, PDVSA – and by extension the Venezuelan economy – was left without a cushion when oil prices dropped in 2014.

Chavez had set up Venezuela for not just an economic collapse but also a political crisis. If his support relied on oil-fueled patronage, what would happen when the money ran out?

The 2002 coup taught Chavez that an alliance of convenience with armed groups known as colectivos could help him control the streets where protesters had almost brought him down. The colectivos, with funnelled money and arms from the state, became political enforcers. Protesters learned to fear these men, who arrived on Chinese-made motorcycles to disperse them, often lethally.

The colectivos grew in power, challenging the police for control. In 2005, they expelled the police from a region of Caracas, the capital, that had tens of thousands of residents. 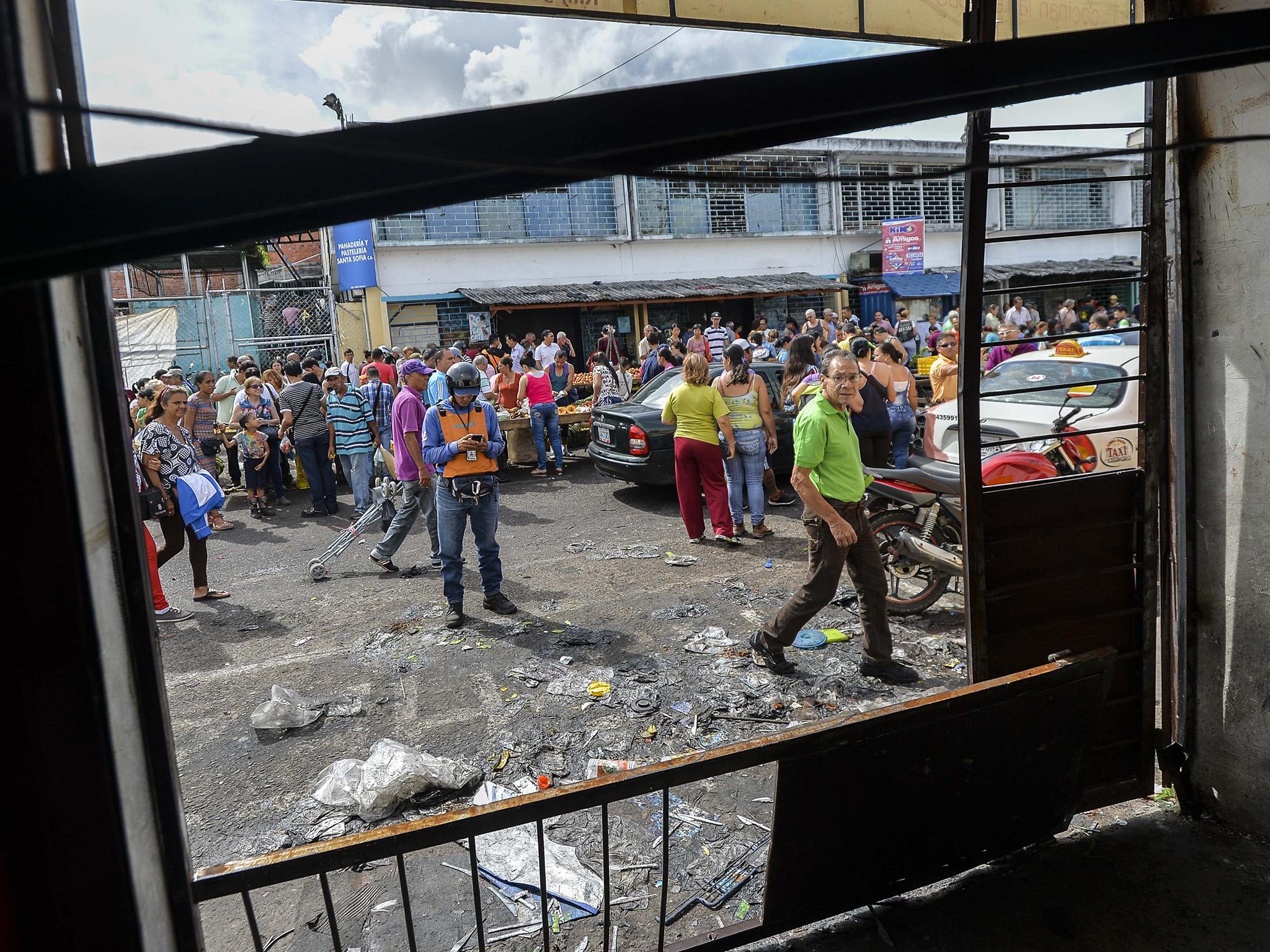 Though the government never officially approved such violence, it publicly praised colectivos, granting them tacit impunity. Many exploited this freedom to participate in organised crime.

Promoted storiesA bike, a race car, a fighter jet, a Tesla car race. Guess who wins?India TodayThe quintessentially British designs to give your home a luxury touchFoods to eat in pregnancyMamyPokoby TaboolaPromoted Links

Alejandro Velasco, a New York University professor who studies colectivos, says the groups were later joined by criminal opportunists who learned that “adding a little ideology to their operations” could win them impunity. Criminality and lawlessness flourished, spiking murder rates.

President Nicolas Maduro, who took power when Chavez died in 2013, inherited an economy that was a shambles and tenuous support among elites and the public. In desperation, he parceled out patronage. The military, with which he had less sway than his predecessor, got control of lucrative drug and food trades, as well as gold mining.

It also worsened street violence. With government stores empty, black markets mushroomed. Colectivos, less reliant on government support, took command of the informal economy in some areas. They grew more violent and harder to rein in. 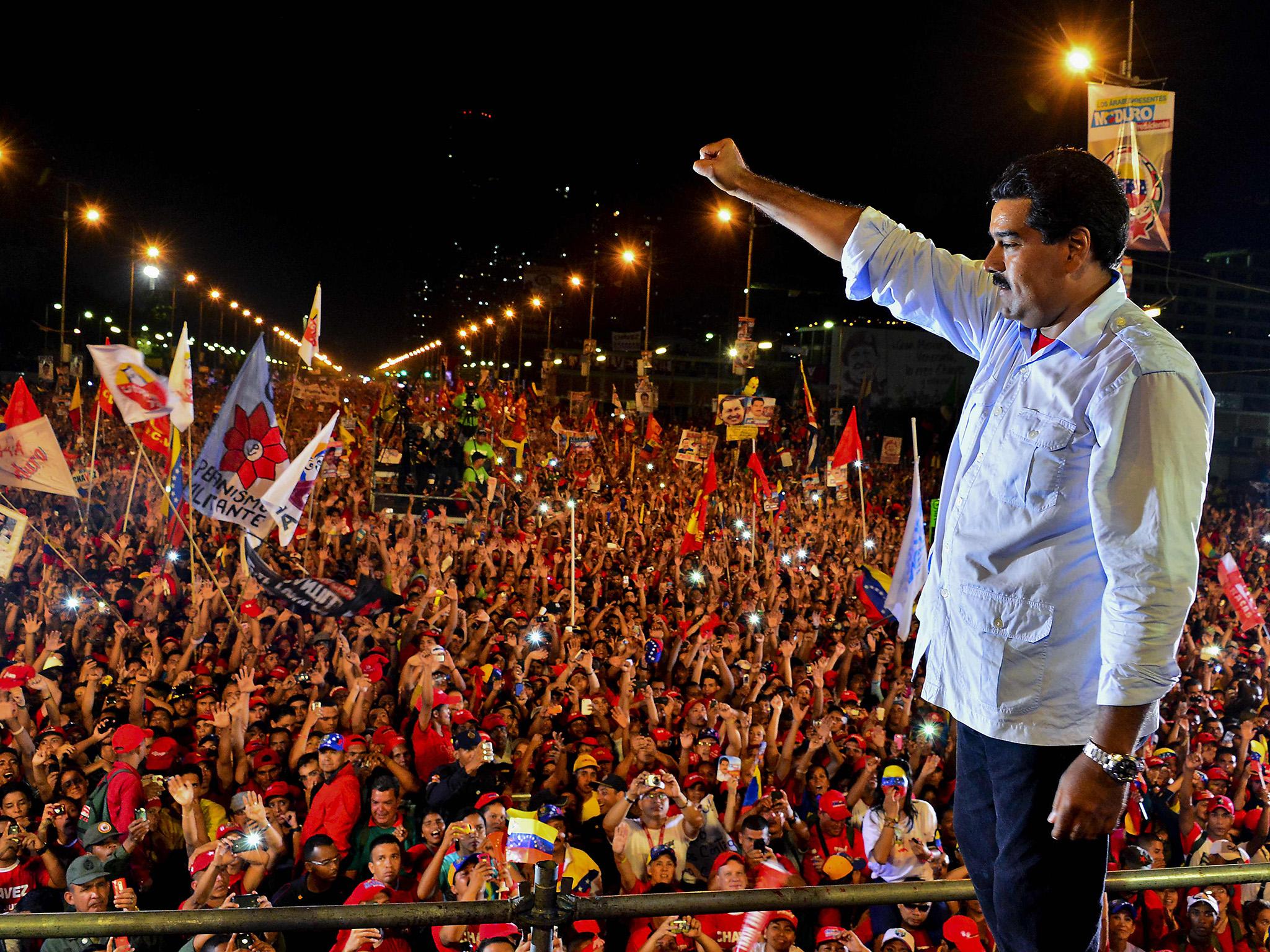 The political system, after years of erosion, has become a hybrid of democratic and authoritarian features – a highly unstable mix. Its internal rules can shift day to day. Rival power centres compete fiercely for control. Such systems have proved far likelier to experience a coup or collapse.

Maduro has struggled, as leaders of such hybrid systems often do, to assert control. Without Chavez’s personal connections or deep pockets, he has little leverage with authoritarian elements dominated by political and military elites. Because he is deeply unpopular, his hold over democratic institutions may be even weaker.

After opposition groups won control of the legislature in 2015, tension between those two systems exploded into outright conflict. The supreme court, stacked with loyalists, briefly sought to dissolve the legislature’s powers. This month, Maduro said he might seek a new constitution.

Venezuela’s paradox, Levitsky says, is that the government is too authoritarian to coexist with democratic institutions, but too weak to abolish them without risking collapse.

Protesters have spilled into streets, but appear deadlocked with security forces and colectivos. Francisco Toro, a Venezuelan political scientist, says it is unclear whose side the military would take if called to intervene. With neither side able to exert control, little in the way of an economy or public order to take over, and a political system seemingly unable to break or bend, Venezuela has brought itself from wealth and democracy to the brink of collapse.