Thousands demonstrate in Budapest against proposed changes to a law seeking rise in maximum overtime hours.

by Creede Newton18 hours ago

Budapest, Hungary - Thousands of oHungarians have taken to the streets to demonstrate against a proposed new labour law and for more academic freedom in the country.

Various trade unions in Hungary are protesting against a change to the labour law proposed by Prime Minister Viktor Orban's ruling Fidesz party that critics have dubbed a "slavery law".

The draft bill, introduced earlier this week, seeks to allow employers to ask for up to 400 hours of overtime work a year. If passed, the law would add an extra eight working hours to a week or result in a six-day work weekl

The protesting workers were joined by students from several Budapest universities, including billionaire George Soros-funded Central European University (CEU), which was recently forced out of the country.

The marchers chanted "We will not be slaves" and "Free university, free country" as the workers and students expressed their solidarity against the government's moves. 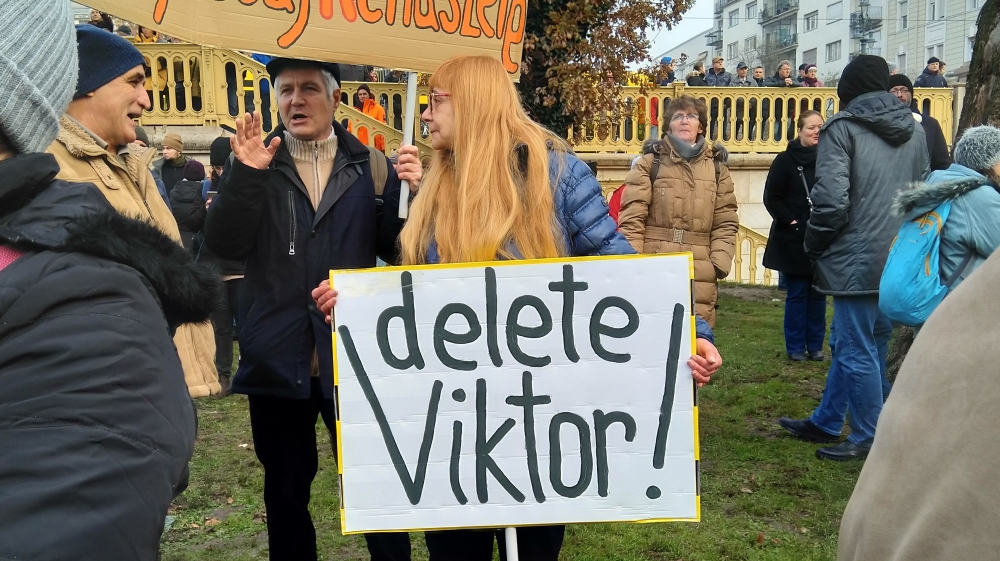 The proposed changes to overtime, first introduced at the end of November, raise the ceiling of annual overtime hours from 250 to 400.

After the workers and the labour unions decried the proposal, the hours were made voluntary.

Still, critics have highlighted a part of the proposal which bypasses negotiations with labour unions, allowing employers to directly make agreements with individual labor.

This, coupled with Hungary's low wages, would pressure many workers into accepting much of the increased overtime and would leave "no time for recreation, no time for families, no time for simple relaxing", Gabor Guzslovan, a member of the Hungarian Steel Workers trade union, told Al Jazeera.

Guzslovan said Hungarian workers "like to do overtime because of the higher wage", but "this plan means they [might] not get overtime bonuses".

Critics have also called attention to the prospect that overtime would be counted over a three-year period, under the new proposal, up from the current one-year period.

This increased period would allow employers greater flexibility in the way they organise a worker's hours.

If a worker quits or loses his job before the three-year period, it is possible that he would not receive payments for the overtime hours he worked.

A government spokesperson told Al Jazeera that the ruling Fidesz party "is supporting the fact that workers must always be given an opportunity to voluntarily perform work in the interests of higher earnings, but this always requires the consent of the employee".

The Hungarian parliament is expected to vote on the proposed overtime changes next week.

Cheap labour has been a selling point for corporations operating in Hungary.

Antonia Raday, a retired factory worker, said Hungarians were "tired of bearing the weight" of cheap labour that can't be found in other European Union countries.

"We work for German automotive companies for low pay, and they sell their cars for the same price," Raday said. "Either they should pay us more or lower their prices."

Critics have speculated that German automotive giants, a key part of the Hungarian economy, have lobbied Budapest to loosen overtime restrictions due to increasing labour shortages in the country.

The German-Hungarian Chamber of Industry and Commerce, however, has denied that any German firms have sought the modifications.

German luxury automotive companies such as Audi and Daimler, which produces Mercedes-Benz, moved their factories to Hungary in recent years.

BMW also announced its plans to build a 1bn euro ($1.17bn) plant in the country in July.

"The biggest question mark regarding [the BMW] investment will be the Hungarian labour market ... it is already hard to find 1,000 employees," Peter Virovaczs, an analyst at ING in Budapest, told Reuters news agency in July.

While labour is cheap, it's also scarce. Hungary's official unemployment rate is 3.7 percent, a near-record low.

The country has seen economic growth and double-digit wage increases in recent years, but its youth migrated to other countries in search of higher wages.

The Organisation for Economic Cooperation and Development (OECD) estimated in June that around 600,000 Hungarians are working abroad. Hungary's population was 9.8 million in 2016.

Immigration 'not a human right': Hungary FM on EU criticism

This flight has created a labour demand and increased stress on social safety net as the remaining population ages.

The proposed overtime changes are seen as a way to mitigate labour shortages.

Laszlo Kordas, chairman of the Hungarian Trade Union Confederation, told demonstrators that Hungarian workers "take the greatest burden on our backs, in return we get the lowest wage in Europe".

A number of younger protesters - students from CEU, Corvinus and Eotvos Lorant University - also felt the proposed overtime changes were part of the government's "attacks" on civil liberties.

CEU, known for championing liberal causes, confirmed its departure from Hungary on Monday following a campaign by Orban's government against Soros.

Orban's Fidesz party has stated its desire to create an "illiberal" democracy and has made remarks viewed as racist, xenophobic and anti-Semitic.

Observers said it was the first time an institution of higher education was forced to leave an EU country for political reasons.

At the Saturday's protest, students called on demonstrators to join their "struggle" for academic freedom and "the dream of a brighter, freer country". 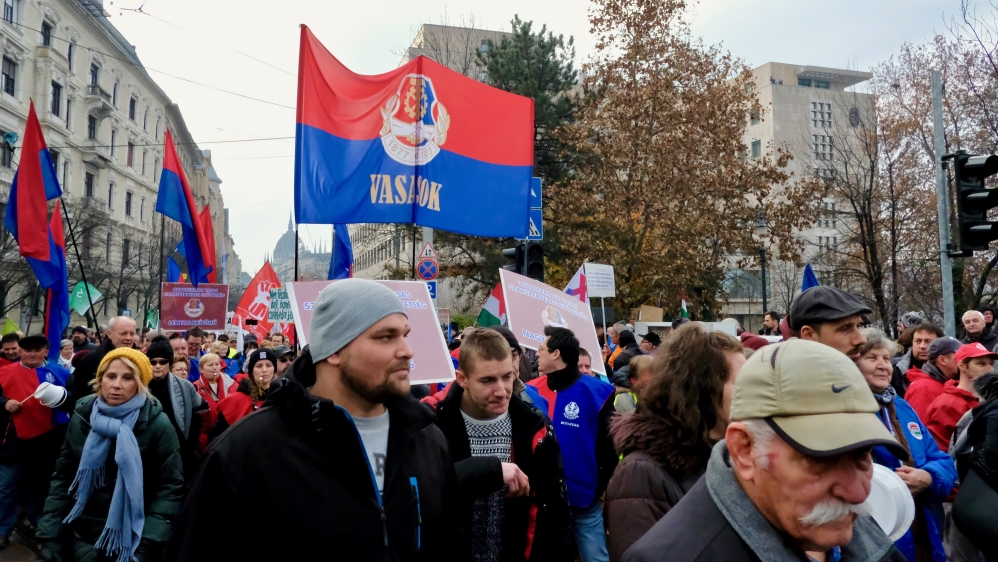 As demonstrators reached Kossuth Lajos Square, they found it closed due to the visit of a Polish politician.

When the speeches ended, demonstrators tried to breach a police line to protest in front of the Hungarian parliament.

Clashes ensued and Imre Komjathi, a politician from the centre-left Hungarian Socialist Party, was injured.

Police eventually allowed hundreds of protesters to break through to the parliament.

The violence was a rare occurrence in Budapest, which largely sees peaceful, well-organised demonstrations.

Labour unions said their protests will continue as they announced plans to close roads across Hungary on Monday.