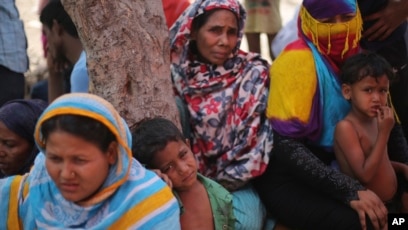 India deported a second small group of Rohingya Muslims to Myanmar Thursday as part of what it said was an ongoing crackdown on illegal immigrants.

A police official in India's northeastern Assam state, Bhaskar Jyoti Mahanta, said a family of five Rohingya was handed over to Myanmar authorities at a border crossing in Manipur state. A group of seven Rohingya was the first to be deported in October.

India's Hindu nationalist government considers some Rohingya a security risk and has ordered tens of thousands of those who live in small settlements to be repatriated.

A brutal Myanmar military campaign has forced some 700,000 Rohingya to flee to neighboring Bangladesh since August 2017. About 40,000 other Rohingya have taken refuge in India.

A United Nations report published in August accused the Myanmar military of committing mass killings and rapes with "genocidal intent" in 2017.

Myanmar has denied the accusations, maintaining the military responded to Muslim militant attacks on security positions.