Inequality, injustice and the elite's annual 'show' in Davos

The attendees of the WEF undoubtedly know inequality is a problem, but they're not interested in finding solutions.

by Larry Beinhart5 minutes ago 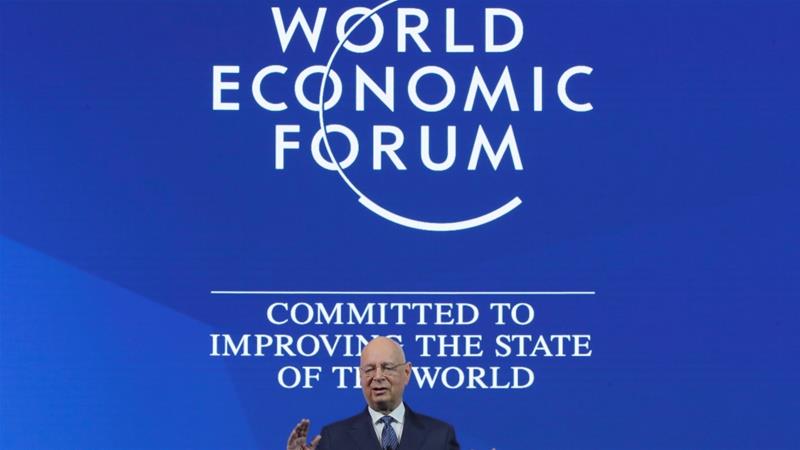 It's the World Economic Forum.

A gathering of - in their own words - "leaders of global society." Heads of government with "top executives of the 1,000 foremost global companies," plus "cultural, societal and thought leaders".

To ensure it's all trendy and hip, "the disruptive voices of the Forum's Young Global Leaders, Global Shapers and Technology Pioneers", will be there as well!

Sorry. "Participation is by invitation only."

Should you worry about an exclusive gathering of the richest and most powerful people in the world? Of course not. The objective of the WEF "is to improve the state of the world."

They broadcast and publish many of their public lectures. They do sound like they're guideposts to making a better world. "These 8 innovations could help us dramatically reduce our fossil fuel use," "How electrification will make the world more inclusive." "How play can help Africa's kids develop skills for the future."

This year's theme is "Globalization 4.0." The number one focus is how"legitimate frustration over the failure of globalization to consistently raise living standards spills over into populism and nationalism". To encapsulate that in one word, "inequality".

Oxfam: World's richest 26 own same wealth as poorest half

Back in 2014, a WEF report had the title "Why inequality is 2015's most worrying trend." It said why. Quite cogently. Inequality "reduces the sustainability of economic growth, weakens social cohesion and security, ... undermines our democracies, cripples ... sustainable development and peaceful societies." Strong stuff. Sounding the alarm. A call to action! There they were, heads of government, top executives, thought leaders, shapers, and pioneers. If anyone could fix it, they could fix it!

Let's look at how they did.

At the same time as Davos, Oxfam releases a report on world poverty and inequality. In 2016, their report said: "The richest 1 percent now have more wealth than the rest of the world combined."

Uh-oh! It looked like things were getting out of hand. Surely all those smart, caring, thoughtful people - with power and the means to change things - sat down at their mega-gathering - strategised and acted!

No. It got worse.

There are 2,202 billionaires, so if that were divided equally among them, they would each be gaining $1,132,246 every day of last year.

One of the many arguments against restraining or limiting or taxing the ultra-rich is that it is not a "zero-sum game," it is not a static pie where a bigger slice for them means a smaller slice for you! Stop whining. However, "the poorest half of humanity saw their wealth dwindle by 11 percent, billionaires' riches increased by 12 percent." So it sure looks like the greedy guys are getting fatter by eating away at the slices of the hungry people.

Heads of state quite frequently attend the Swiss event.

This year three significant leaders are missing: US President Donald Trump, French PresidentEmmanuel Macron, and British Prime MinisterTheresa May. All three represent the political upheavals that come from the discontents of ever-increasing inequality. Trump's election was a shout that "the elites have failed us". So was Macron's. He was swept into office with a political party that he'd just invented, dressed up in the promise of change, and now the yellow vests are rising in rebellion because they see him as bringing change for the elites and not for them. Theresa May stayed home to try to manage Brexit, another combination of people shouting "What about us?", the elites having nothing to offer them and charlatans are stepping up to the e-megaphones with solutions that are certain to make things worse.

There are several lectures and conferences that say things like "Profit with purpose is set to become the new norm. ... it's all set to change: the CEOs of the future will want their companies to be recognized as forces for good."

There are quotes from the Edelman Trust Barometer that say more people trust business than government and they "expect CEOs to lead on social change rather than waiting for government intervention".

Of the "4 types of leader who will thrive in the Forth Industrial Revolution," #1 are the "Social Supers." They "stand out for their ability to do well by doing good."

As you go through the descriptions of the wonderful fix the world needs, you will discover that "brands can be a force for good." Brands will bring "gender equality" and "sustainable behaviour". That's why the companies producing our favourite brands all pay and promote women the same as men! They never use the plastics that are trashing the land and the sea. Oh, well, in the future they'll be willing to forgo profits in order to reach such goals. More typically, they promise that new technology is Mr & Mrs Fixit. Such technologies being business, profit-making solutions, not government or regulatory solutions.

It is clear that many of the people involved are aware, to some degree, that inequality is a problem. That it is creating instability. That it underlies and aggravates conflicts. Some may even accept that it leads to dangerous economic instability, like the crash of 2008 and the worldwide Great Recession.

The equation is quite direct. Money buys power. Power is used to increase wealth. Which buys more power. The solutions, the only real solutions, are very clear. Decrease the money the ultra-rich have and increase the amount of money that everyone else has. That translates into higher taxes, fewer tax dodges and enforcement against tax havens. Also, backing unions so that working people have more power and tackling the more complex problem of influence of money in politics.

These are not being advocated in Davos.

Indeed, it seems reasonable to believe that the show - all those do-gooder, let's save art, education and frogs lectures and conferences - is there for show. Who goes there to listen to that stuff? People go to meet others with money and power. To connect. Do deals. To protect what they've got and get some more.