Aiia Maasarwe’s death has been used as grist for the gender culture wars, a pointless loop of generalisation, accusation and defensiveness 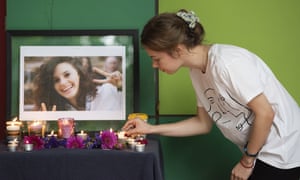 We don’t have to politicise every act of violence against a woman. It may relieve the anger and sadness to cry “this must stop”, or to blame the patriarchy, or to, as writer Clementine Ford did after the horrific murder of Aiia Maasarwe last week, demand men “pick a side” because “you are all implicated”.

But it doesn’t help.

Barely a day after Maasarwe’s body was found in Bundoora in Melbourne’s north, allegedly the victim of a random killer (a 20-year-old man has been charged with her rape and murder), the 21-year-old Palestinian’s death was grist for the gender culture wars, a pointless loop of generalisation, accusation and defensivenes

A few days before, there was a flurry about the Gillette’s “the best men can be” advertisement and what it said about masculinity in the age of #MeToo. That was all good fun – and there were some important points made, too – but this was about a murder of a young exchange student. Some things are too serious for a hot take, too heartbreaking to be seized upon as evidence for well-worn positions.

As he did after the murder of comedian Eurydice Dixon six months ago, Victorian premier Daniel Andrews spoke nonsense when he sent condolences to the family of Maasarwe. This crime was really about the “culture of violence against women”, he said. We have to stop “blaming ‘bad men’ for these crimes, while ignoring the sexist attitudes in our society that created them”.

There is no evidence that I’m aware of that the extremely rare instances of random rape and murder of women – two or three a year nationwide according to the Australian Institute of Criminology, with little change in 30 years – has anything to do with casual sexist attitudes. There is no causal link between men refusing to “call out” a sexist joke and the rape and murder of a stranger.

Some things are too serious for a hot take, too heartbreaking to be seized upon as evidence for well-worn positions

To suggest, as Ford did, that while not all men are responsible for such crimes (big of her), that “as you exist in a class of people who maintain these rights and privileges over others it is up to you to be active in destroying that”, is about as valid as suggesting Muslims have collective responsibility for a terrorist act committed in the name of Islam.

The loop of fury is endless. Journalist and broadcaster Mike Carlton tweeted that Ford’s view was “bullshit” and I had some sympathy for his position. There are ugly trolling men out there, to be sure, but it is all but impossible for any man to express his distaste for trite accusations that unless men speak up against sexism – a good thing – they are collectively responsible for a horrific rape and murder. To do so proves the accuser’s point. Men are such snowflakes! How can the poor things be offended when WOMEN ARE BEING RAPED AND MURDERED IN OUR STREETS? Is this a culture war win-win, or lose-lose.

To step back, we have a serious male violence problem (and it would be terrific if Andrews and others would discuss that more, although that doesn’t take away from the domestic violence crisis, undoubtedly gendered).

Almost 90% of those who commit homicide (murder and manslaughter) are men. Men make up 64% of homicide victims too. Even in stranger homicides – much less common than murders of family members or acquaintances – 92% of victims are men.

Why men are so overrepresented in violent crime is contested and horribly complicated. Some argue evolution, some biology (blame testosterone), but few would argue against culture playing a role. Generalisations on masculinity can stretch credulity – Ryan Gosling is nothing like Arnold Schwarzenegger. But the American Psychological Association’s new guidelines that “traditional masculinity – marked by stoicism, competitiveness, dominance and aggression – is, on the whole, harmful” to boys are hardly radical.

I worry about some of the assumptions. Most of the traits we tend to admire – leadership, protection of those who are vulnerable, kindness – we honour in women as much as men. And it’s not always bad for a woman to display a touch of aggression, either.

But to generalise, men pay a high price for the straitjackets we put them in as boys – don’t show emotion, don’t be a sissy. They avoid going to the doctor, including when they need mental health treatment. They suicide at alarming levels. They abuse drugs and alcohol more and they fill our jails. #NotAllMen of course, but too many of them. All this is overlaid with race and sexual preference – Asian men are considered not sufficiently “masculine” and gay men turned into caricatures. Who would insist that this has nothing to do with the way boys are raised?

Male violence is linked to all this, especially domestic violence where women are far more likely to be victims than men, and where there is evidence that those who hold stereotyped views of gender more readily tolerate violence against women.

But with stranger homicide, there are more vital questions we need to ask. The majority of perpetrators and victims are men. For the tiny number of men who rape and kill women they don’t know, the evidence appears to be that they are likely to have been traumatised as children, physically, psychologically or sexually. They are likely to have been neglected. They are emotionally lonely and socially isolated. They may have a sadistic fantasy life. It could be a combination of those things, coupled with substance abuse and mental illness.

Most men who have those experiences will never rape and murder, but a few will, with serious early intervention one possible answer. Are we picking up these kids early, intervening when we notice boys (and a few girls) with extreme violent tendencies? What does that intervention look like? Are we doing enough to protect children from ongoing abuse, knowing its consequences for the men they will become and for their potential victims? Are we treating serious mental illness as seriously as it warrants?

Psychologist James Ogloff has said it is naive to suggest that respectful relationship programs and calling out sexism – as worthy as they are – have anything to do with preventing such terrible crimes. Ogloff has studied these kinds of cases, including Adrian Bayley, who raped and killed Jill Meagher, and Scott Miller, who murdered and raped Yuk Ling Lau.

Ogloff told a Melbourne court it was hard to draw any comparisons between the cases – Bayley had a history of violent rape, while Miller’s crime was out of character. There was evidence of ongoing physical abuse against Bayley when he was a child, and the accusations of sexual abuse. His borderline personality disorder was made worse by alcohol abuse. Ogloff said Miller was diagnosed with schizophrenia, which had contributed to his offending, but had not caused it. He was remorseful and had attempted suicide in jail.

Sometimes we fall back on calling people “evil”, and there is some comfort in that when a crime seems unfathomable. To make it fathomable by insisting such crimes are at one end of everyday sexism, might give us comfort, too. But it’s false comfort because it isn’t true. We owe the victims at least that.