Maldives has a new president. These are the 5 big issues he faces

From Chinese debt and religious violence to rights abuses and graft, a look at challenges facing Ibrahim Mohamed Solih.

by Zaheena Rasheed18 hours ago 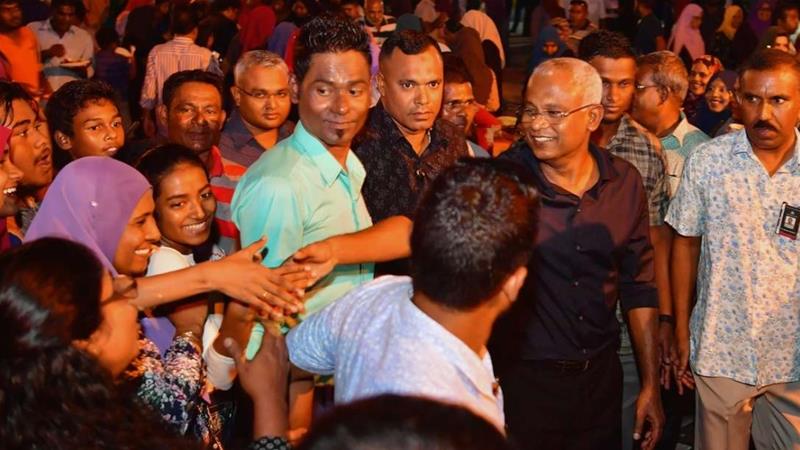 Cannons blasted the balmy air of Male with a 21-gun salute on Saturday, just moments after Ibrahim Mohamed Solih finished taking the oath of office as the seventh president of the Maldives.

It was a momentous occasion, one that capped a tense, months-long presidential contest, and a subsequent period of post-election uncertainty following years of political turmoil in the small Indian Ocean island nation.

In a shock result, Solih, a 54-year-old veteran legislator, defeated Abdulla Yameen in the September 23 polls, held against widespread public anger over corruption and rights abuses, including the jailing of nearly all opposition leaders.

In his inaugural address, delivered before thousands of people at the national football stadium in the capital, Solih vowed to establish justice and tackle corruption.

Still, he faces an uphill battle to restore stability and push through democratic and economic reforms.

Here, Al Jazeera takes a look at five of his biggest challenges:

In his speech, Solih said the Maldives was "in a precarious financial situation" owing to "reckless development projects", and appealed for help from foreign countries and international organisations to stabilise the economy.

Under Yameen, Beijing had loaned an estimated $1.5bn to the Maldives to fund an upgrade of the country's main international airport - a bridge linking it to Male - as well as massive housing projects in a new population centre.

The debt figure is more than a quarter of the country's annual gross domestic product.

In March, the US-based Center for Global Development identified the Maldives as one of eight countries subject to high debt distress because of investments from China.

Ibrahim Ameer, Solih's choice for the crucial post of finance minister, told Al Jazeera on Sunday he was "worried" about the debt and said the country needs up to $300m in budgetary support immediately. The Maldives was now in talks with India, the United States and Saudi Arabia for assistance, the newly appointed minister said.

Meanwhile, India's Prime Minister Narendra Modi, who was among the 300 foreign dignitaries to attend Solih's inauguration on his first visit to the country, has already pledged help. 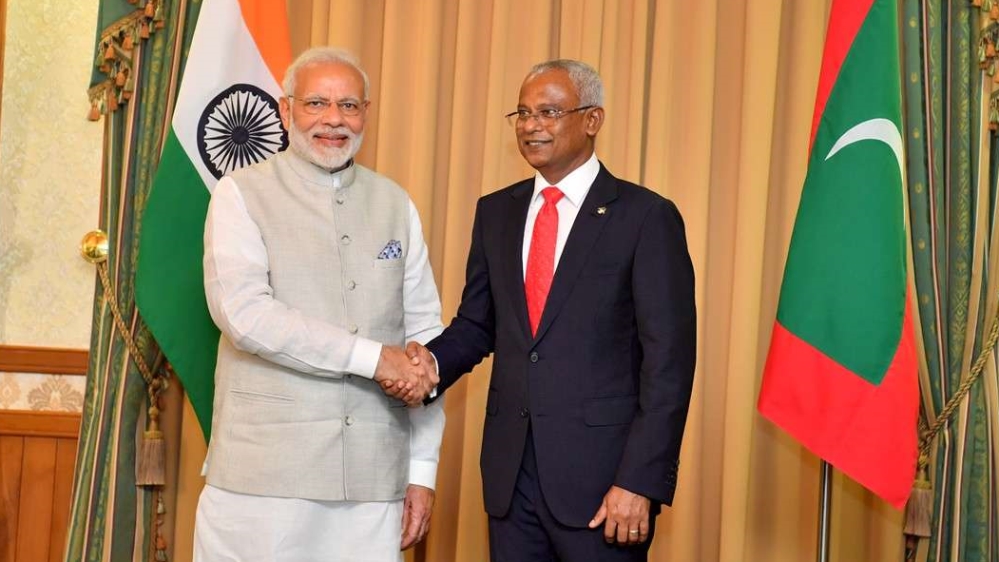 Solih joined the presidential race at the eleventh hour after receiving the backing of a coalition of four political parties whose leaders were either in jail or exile. Among them were former presidents, Mohamed Nasheed and Maumoon Abdul Gayoom, as well as tourism tycoon Qasim Ibrahim, who unsuccessfully ran for the presidency twice before.

Despite joining forces, the four parties have significant ideological differences and their leaders have clashed fiercely for more than a decade.

In 2008, Nasheed and Qasim formed an alliance to end Gayoom's 30-year rule in the country's first multi-party election. Their coalition, however, fell apart less than 100 days into Nasheed's rule.

Qasim then teamed up with Gayoom in 2012 to overthrow Nasheed, in what the latter labelled a coup.

"You cannot run an executive presidency as a coalition government," said Ahmed Nihan, an opposition legislator and close aide to Yameen, the former president.

"The ministers will not obey the president, they are likely to follow their leaders," he said, referring to the division of cabinet posts among the coalition partners.

"This is all going to end in chaos."

However, describing the new president as "patient" and a "good listener", Nihan added: "If there is one politician who can hold a coalition together, it is Solih."

Accountability for corruption and rights abuses

Solih ran for the presidency promising to investigate alleged human rights abuses and corruption under Yameen, including the jailing of dissidents, murders, disappearances, and the theft of at least $79m in tourism revenues, a scam that was the subject of the 2016 Al Jazeera investigation Stealing Paradise.

A money-laundering body meanwhile reported Yameen had received $1.5m in cash ahead of September's election.

Solih, at his oath-taking ceremony, pledged to disclose the findings from such investigations so that the Maldives could "move ahead as a nation".

Mariyam Shiuna, executive director at Transparency Maldives, an anti-corruption group, welcomed Solih's pledges, but said: "this will prove to be a huge challenge as a lot of officials accused of corruption and rights abuses continue to be part of the system."

Politicians from across the spectrum and powerful business leaders had benefitted from alleged corruption under Yameen, she said, including the tourism scam in which dozens of coral islands were leased for tourism development at knock-off prices.

There were worries about "selective justice", she said, while also acknowledging the investigations could risk instability.

Of the many challenges facing his new administration, Solih in his inaugural address identified reforms to ensure judicial independence as its "highest priority area".

Judges in the Maldives are widely perceived as corrupt, unqualified and subject to external influence.

That's because dozens of people - including Nasheed, Gayoom and Qasim, as well as two ex-defence ministers, two Supreme Court judges and a top prosecutor - were jailed under Yameen after trials that were widely condemned as politically motivated.

On the other hand, very few suspects accused of a crime, including murders, are successfully prosecuted. Such trials are often held behind closed doors.

Meanwhile, an estimated quarter of the country's 183 judges have criminal records, according to the US Department of State. Many do not hold law degrees and cannot interpret common law or Islamic law because they do not have the required English and Arabic skills.

Shahindha Ismail, executive director of the human rights NGO Maldivian Democracy Network, said reforming the judiciary must be "a top priority" to ensure justice for past corruption and rights abuses. But there were concerns, she warned, of how willing some politicians in the ruling coalition may be to cede control over judges.

The Maldives, a Sunni Muslim state, has witnessed a surge in attacks motivated by religion in the past decade, including the killing of liberal blogger Yameen Rasheed and Afrasheem Ali, a moderate Islamic scholar and member of parliament, as well as the disappearance of journalist Ahmed Rilwan.

Solih has pledged to investigate the cases.

Meanwhile, scores of young Maldivians have left the country to fight with armed groups in the Middle East, including the Islamic State of Iraq and Levant (ISIL, also known as ISIS).

Mohamed Hameed, a former police intelligence chief, said the flow of Maldivians to the Middle East has abated as ISIL and other groups lost territory in Iraq and Syria, but added that the country was facing the "huge security challenge" of highly-trained fighters coming back home.

"Even in cases where returnees suspected of violent acts have been arrested, there has been no successful prosecutions, and there are no programmes to counter narratives that promote violence," said Hameed.

Liberal voices have meanwhile reported receiving death threats for their advocacy for freedom of belief and, under Yameen, they were frequently targeted by the police for their calls for a secular state as well as criticism of religious violence.