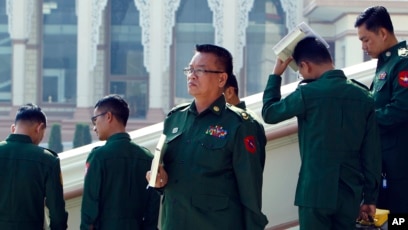 Myanmar's parliament voted Tuesday to create a committee to propose amendments to the country's military-enacted constitution, which grants the armed forces the power to block any change.

The proposal to form the committee was presented by a member of the ruling National League for Democracy party of leader Aung San Suu Kyi, which took power in 2016 after more than five decades of military or military-backed rule.

The 2008 constitution gives the military control of national security ministries and 25 percent of legislative seats, enough to prevent any constitutional changes, which require the support of more than 75 percent of lawmakers.

The committee proposal required a simple majority to pass. Military lawmakers boycotted the vote, saying it violated parliamentary procedures for changing the constitution. Brig. Gen. Maung Maung, one of the military representatives in parliament, said the objection was not against proposing changes, but rather against setting up a committee to do so.

With the high bar set for changing the constitution and no sign that the military wants to give up its considerable power, it was unclear if the move by Suu Kyi's ruling party was only symbolic, signaling its intentions ahead of the next general election in 2020.

Constitutional amendment was one of the campaign promises made by her party in 2015, along with rule by law and ending armed conflict with ethnic minority groups. The party circulated public petitions calling for amending the constitution that received millions of signatures.

Once in power, the National League for Democracy made an end run around one of the constitutional clauses it sought most to change. One article clearly aimed at Suu Kyi, the leader of the country's pro-democracy movement and long-time nemesis of the military, barred her from holding the president's office because she had a foreign husband, the late British scholar Michael Aris. Once in power, her party created the office of state counselor especially for Suu Kyi, granting it executive powers and making her effectively the head of government.