Study cites combination of socio-economic factors such as marital prospects.

A rise in literacy levels among women has failed to translate into an increase in the number of working women due to a combination of socio-economic factors such as the importance of education for improving marital prospects as well as higher prestige attached to households which keep women out of labour force, according to a new research.

A study authored by Surbhi Ghai and published by the Indian Council for Research on International Economic Relations (ICRIER) has cited the Labour Bureau’s employment figures to show that there is a rise in the percentage of women out of labour force between 2011-2012 and 2015-2016 across all levels of education and age-cohorts. 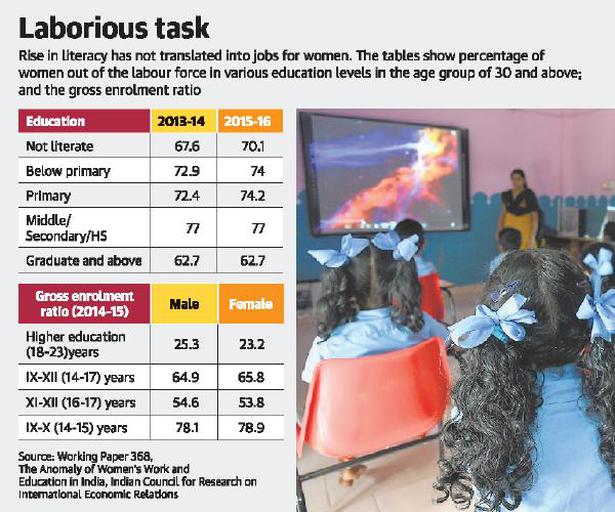 This has happened even though there is gender parity in attainment of education. The gross enrolment ratio shows that there are equal numbers of boys and girls at secondary level and women remain in education longer.

The author argues that for many the incentive behind ensuring better education for their daughters is not so much the lure of a better paying job but the promise of a better marriage prospect. For instance, in 2011-2012, 60.3% of the divorced/ separated women constituting 0.4 % of the total population were working. But, only 32.5% of currently married women, at 50.5% of the total population, were in the workforce.

Social norms also ensure that higher prestige or social status is associated with families which keep their women out of the workforce.

At the same time, the growth in formal sector jobs has not kept pace with the supply of educated women, which may have led to “crowding out of females” from the workforce.

The research study recommends that government policies should focus on behavioural changes that make female employment more acceptable in the society, communication programmes on gender equality in secondary education to help students imbibe equitable gender norms as well as programmes that acknowledge child care as the responsibility of both parents.