Sewage workers are poorly compensated for injuries and health support 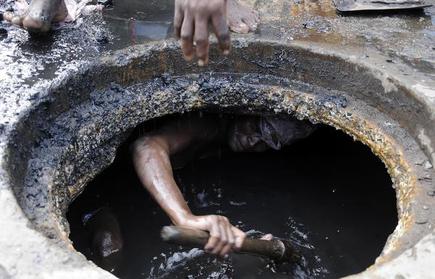 Sewage workers are poorly compensated for injuries and health support

The working conditions of manual scavengers — those who manually clean drains, sewers and septic tanks and remove human excreta — has not changed for decades. Many of them make their way down a manhole wearing next to nothing, and clean sewers with minimal equipment. Once they finish, they cart away the waste without wearing any protective gear. Manual scavenging is considered to be hazardous and could lead to death.

This deplorable practice was banned in India in 1993 but the specific piece of legislation banning it was ineffectively implemented by State governments. In 2012, the Prohibition of Employment as Manual Scavengers and their Rehabilitation Bill was passed but this too has been criticised for significant loopholes. Even today, people continue to die from the practice of manual scavenging.

Media reports, citing data from the government’s National Commission for Safai Karamcharis — a government body — say that 123 people employed to undertake different forms of manual scavenging have lost their lives since January 2017. At least six deaths were reported in mid-September in Delhi this year.

The law states that employment without any protective gear is a cognisable, non-bailable offence. A large majority of manual scavengers face serious health hazards such as poor general health, a high mortality rate, poor nutrition and increased communicable diseases. Surveys show that only 10% of these patients feel positive about their health status and most of them have a very poor quality of life with respect to general health. Physical injuries are among the most common health issues they face followed by infections and lung diseases. The aeration and de-watering process involved in cleaning also introduces droplets and particles into the air, which are inhaled into the lungs, coughed up and swallowed leading to an array of lung and gastro-intestinal diseases.

There have been several studies conducted which show that respiratory diseases are the commonest ailment among sewage workers. A majority of them have abnormal lung function due to exposure to inhaled endotoxins and airborne bacteria. Scavengers are most often exposed to dangerous fumes such as hydrogen disulphide, methane, ammonia and carbon monoxide. Almost 52.6% of patients develop respiratory problems. Studies show that increasing exposure to hydrogen sulphide causes reduced lung volume. Exposure to chemicals during the removal of excretory waste commonly leads to chronic cough, breathlessness, and a tightening in the chest. Chemicals can also enter their bodies through the skin leading to dermatitis and skin infections. Scavengers also complain about spinal problems. This is frequently due to slipped disc and osteoarthritis — a joint diseasethat results from a breakdown of joint cartilage and the underlying bone.

Hydrogen sulphide (H2S) is the main determinant of health problems. In low concentrations, it is an eye and a lung irritant. H2S gets absorbed in the lungs and is oxidised to form compounds that are toxic. In higher doses, it can trigger headaches that may last for several hours, trigger a pain in the legs and even lead to a loss of consciousness. Inhaling large amounts rapidly produces anoxia resulting in convulsions and death by asphyxiation.

Other infections that are common are leptospirosis which affects people coming into contact with animals and their excrement. Rodents commonly infest sewers and carry leptospira which is found in the urine of infected rodents. Sewage workers are also exposed to other infectious agents such as Helicobacter pylori and the hepatitis virus. Inhaled aerosols contain pseudomonas, streptococcus, clostridium, mycobacterium and enteric viruses.

Developed countries permit sewer workers to go about their work only after training, and they are provided with a proper suit and respiratory apparatus to protect themselves. As India’s population grows, sewage management cannot be ignored. Sewage workers are poorly compensated for injuries and health support. There is an urgent need for outreach programmes that will help in educating sanitation workers about hygiene, safe-health practices and generating awareness about their legal rights.