Sounds of silence: Radio 3 to broadcast from empty battlefields 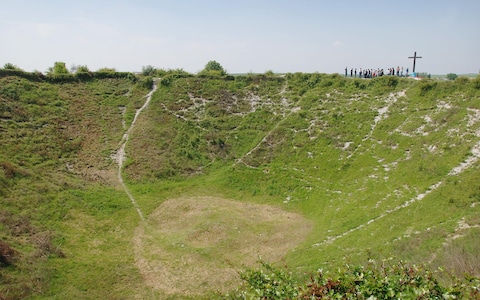 Radio 3 is to broadcast the sounds of silence, with a series of recordings made from battlefields decades or centuries after the fighting stopped.

The ‘sonic memorials’ will be aired throughout the weekend of November 10-11 to commemorate the 100th anniversary of the end of the First World War.

One of the recordings was made at the Lochnagar crater, site of a mine charge that marked the British offensive at the Battle of the Somme. Other locations include Sharpsburg, where the bloodiest battle of the US Civil War was fought, and Halabja in Iraq, site of a chemical attack in the last days of the Iran-Iraq War.

The segments will be broadcast hourly and introduced by Allan Little, a former BBC special correspondent, before descending into a silence punctuated only by the rustling of trees, birdsong or the distant hum of traffic.

Alan Davey, controller of Radio 3, said the recordings would help listeners to connect with the past. “We will be broadcasting ambient sounds from battlefields all around the world, capturing that sound and giving audiences a chance to think about what happened there and hearing what is there now - the sounds of nature.”

Elsewhere in the schedule, ‘slow radio’ is getting a permanent slot, with a monthly programme offering a meander through a zoo at dusk and the sounds of Durham Cathedral at night.

“We are giving audiences a chance for quiet mindfulness, and consideration of the world from another angle,” Davey said.

“Radio 3 is more than a radio station - we are a place to get away from the frenzy of everyday life and better understand the world in which we live.”

Other non-musical offerings include the world premiere of a ‘lost’ Edith Wharton play, The Shadow of a Doubt, which was unearthed in a Texas archive by academics.

Wharton, author of The Age of Innocence, wrote a number of plays that never made it to the stage. The Shadow of a Doubt dates back to 1901.

The station will also stage its first voice-activated programme, designed specifically for Amazon Alexa. The Unfortunates, a play starring Martin Freeman and based on the experimental 1969 novel by BS Johnson, will invite listeners to choose the story’s running order.

The idea stays true to the vision of Johnson, who wrote his book in 27 unbound chapters which, save for those marked ‘First’ and ‘Last’, were designed to be read in random order.