Review team adopts recommendation that makes possible the expropriation of land without compensation. 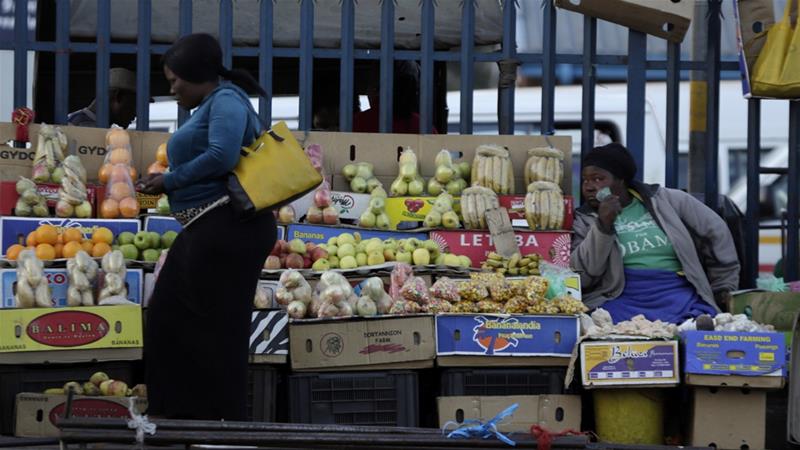 A parliamentary committee in South Africa has backed a recommendation to amend the constitution to allow for land expropriation without compensation.

The ruling African National Congress (ANC) aims to change the constitution to allow for the new legislation to address racial disparities in ownership that persist more than two decades after apartheid's demise in 1994.

Its legislators on the Constitutional Review Committee, along with those of the leftist Economic Freedom Fighters voted in favour of the proposed change on Thursday. The amendment was rejected by the main opposition Democratic Alliance.

"South Africans have spoken, loud and clear, and we listened to their cry," Lewis Nzimande, co-chairperson of the committee, said in a statement.

"This has truly been a massive project. We have seen people queuing for long periods, just to make sure they have a say on the matter."

The review team's recommendation will now go to the national assembly for consideration. The panel's conclusions are likely to be challenged in court before a full vote by legislators to change the constitution. 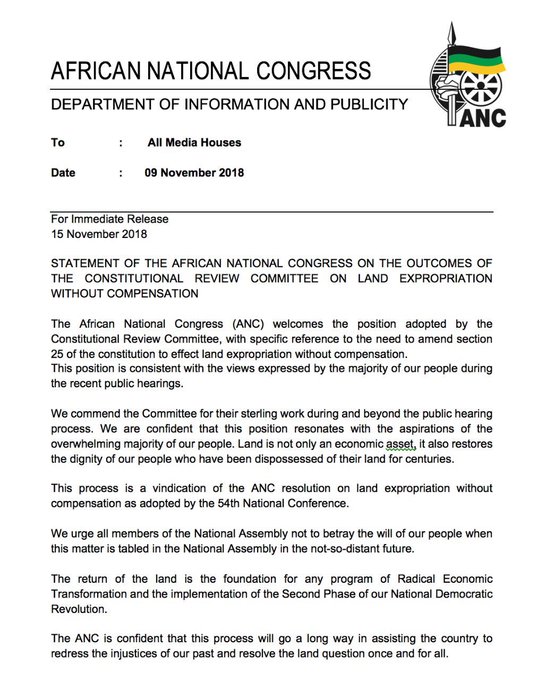 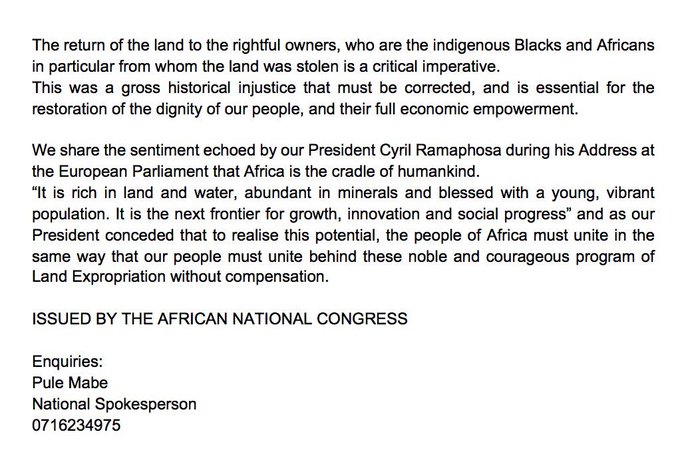 #MaSisulu100✔@MYANCSTATEMENT OF THE AFRICAN NATIONAL CONGRESS ON THE OUTCOMES OF THE CONSTITUTIONAL REVIEW COMMITTEE ON LAND EXPROPRIATION WITHOUT COMPENSATION 507:17 PM - Nov 15, 2018

54 people are talking about thisTwitter Ads info and privacyREAD MORE

AgriSA, an association of agricultural associations, criticised the committee's recommendation, saying the amendment of section 25 of the constitution would be diametrically opposed to the protection of property rights and would gravely harm the economy.

Dan Kriek, Agri SA president, said his organisation would challenge the recommendation, which it termed "reckless and populist", through its legal team.

"The proposed amendment is politically motivated and will cause large-scale damage to the South African economy," he said.

Agri SA@AgriSAOfficial"We shall do everything in our power to oppose an amendment." - Ernest Pringle, Chair of Agri SA Centre of Excellence: Land.#AgriSA will roll out the next phase of its tactical plan against expropriation without compensation #EWChttps://youtu.be/Uu4x2k-mndA 16:15 PM - Nov 15, 2018

The legacy of apartheid

The issue of land remains among the most sensitive and divisive in the country.

At its core, apartheid was a discriminatory system that left black South Africans either dispossessed or denied access to land, infrastructure and resources, while their white counterparts were given preferential treatment and access to the economy.

President Cyril Ramaphosa's ANC aims to change the constitution to allow for the new legislation to address racial disparities in ownership that persist more than two decades after apartheid's demise in 1994.

The ANC faces tricky elections next year as its support has declined steadily since Nelson Mandela led it to victory in the 1994 poll. The ruling party has made the acceleration of land redistribution a key issue ahead of the elections.

Ramaphosa took office in February and has pledged to revive the economy and restore the party's popularity after the nine-year reign of his scandal-tainted predecessor Jacob Zuma.