Tribes struggle to survive in Borneo 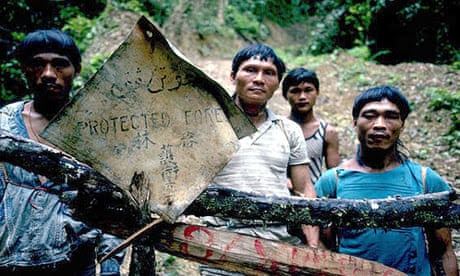 Tribes struggle to survive in Borneo

Although the Penan still fight for their land, large corporations continue to clear forests for logging and oil palm cultivation. When Miriam Ross visited Penan communities in areas threatened by deforestation or development the villagers made repeated requests for help to make their voices heard. Ross works forSurvival International, an organisation that supports tribal people and brings their plights to light, in the hope that public opinion pressures governments into fairer treatment of tribes. Here she talks to Frances Tamburin about her work

The Penan tribe of Borneo are facing a fight for survival. Logging, dam construction and deforestation is threatening the forest on which they depend.

Although only around 300 of the tribe of hunter-gatherers remain nomadic, even those who have settled remain dependent on the forest. Since the 1970s, the Malaysian government has been exploiting the forest of the Sarawak region, logging being a particularly devastating example.

The tribe have been trying to prevent logging on their territory since the mid to late 80s. They've been blockading roads to stop loggers from entering their land, with some success, but many communities have seen their forests devastated – forests they rely on for food, medicine and the materials they use to build their homes.

The first community I visited lived in an area where they had managed to keep the loggers out, though officially a company had rights to their land. I had to travel there via the logging roads and was shocked to see truck after truck carrying the timber out. I left the road, transferred to a small boat and took it up river, pushing it over the rapids until, eventually, I arrived at the settlement. It was beautiful there.

The Penan were very welcoming. They were gentle and softly spoken, and cooked me meals of wild boar that they had hunted. There was a lot of food – they pointed out an abundance of fresh boar tracks. Wild boar is what the Penan most like to eat, as well as deer and fresh fish from the river. They catch smaller animals with blow pipes: long carved-out pieces of wood through which they blow poison darts. Another community I met had made their home at the bottom of a valley where there was old forest. While I was there, we heard bulldozers at the top of the ridge on one side of the valley. A logging company was trying to come over into their territory. The tribe told me they had gone up to the ridge to ask the loggers not to come over but were told to stop harassing the workers. The loggers said that the government had given them permission to be there and the indigenous people would be killed if they didn't stop protesting.

People would ask for my help in every community that I visited. The tribe are very aware of the odds stacked against them – big powerful companies like Samling, who harvest the timber, and Shin Yang, who harvest palm oil, are on their land with the backing of the Sarawak government. It has also been reported that some of members of the state government are involved with the logging and palm oil companies.

In many of these cases there's a failure among those in power to appreciate the Penan's way of life as valid. Most of the indigenous people of Sarawak are 'shifting cultivators' tribal, government, who practise agriculture. This is at odds with the Penan's nomadic hunter-gathering tradition.

I went on to visit a community whose land had been heavily logged. The contrast between them and the Penan I had been with previously was shocking. People here had very little to eat. They told me they went for months without finding a single wild boar and were a little thin. But they were determined to cling to their way of life, despite the odds. The fight for survival has come upon the Penan quickly – 15 years ago life had been relatively straightforward for them.

Some of the tribe have moved into towns, but they're in a minority. The Penan prefer to hang on to the small patches of forest that remain. They can eke out a living in cleared areas where oil palms are yet to be planted. When companies leave these areas the forest begins to regenerate slightly, although it never totally recovers. When the palm oil companies return to plant their crops the land becomes useless to the Penan. Driving through areas of Sarawak, you can see the rows of neat little trees, stretching over miles of indigenous land.

Sadly, some of the Penan end up working for the companies who moved them off their tribal land. They have no choice: they can no longer find food in the forest so have to earn money to buy it, although the companies do not pay them well.

As well as deforestation, the Penan's land is threatened by plans to build a series of hydroelectric dams in Sarawak. The first dam is already under construction, and the communities who live on that land have been ordered to leave. But the state of Sarawak already has the capacity to produce more electricity than it needs. The surplus electricity will be sold and exported to other parts of Malaysia.

I went to several of the communities who were being told to make way for these dams. They were worried about what to do and didn't want to move. They would be given only a small area of land, per family, to farm in government resettlement areas. They would have to grow food in these plots, which is a far cry lifestyle they are used to. They should have the right to choose if they want to grow crops or be hunters, or a mixture of the two, which is what many of them now do.

In many other countries indigenous land rights are at least recognised on paper, but the Malaysian and Sarawak governments do not recognise the Penan's rights. But the Penan are not giving up. They government are out of step. I think if there is enough international pressure on the Malaysian government, hopefully the Penan can see their rights recognised and their land protected.