Dalits and other Indian gender, religious, tribal and ethnic minorities are regularly harassed on Twitter by right-wing troll armies.

Ms. Soundararajan is an artist and activist.

On Nov. 13, Jack Dorsey, the chief executive of Twitter, met with several female journalists and activists in New Delhi to talk about online safety in India. Female journalists and activists from religious and cultural minorities face relentless harassment and abuse on Mr. Dorsey’s platform. The meeting with Mr. Dorsey and other Twitter executives was aimed at helping them better understand the magnitude of the problem in India.

My colleague Sanghapali Aruna, who runs Project Mukti, an organization that leverages technology to empower Dalits to fight caste prejudice, was among the attendees. “Dalit,” which means “oppressed,” refers to the caste of people who suffer the greatest violence, discrimination and disenfranchisement under India’s caste apartheid that structures Hindu society.

When Ms. Aruna met Mr. Dorsey she had already left the platform, fearing for her safety following a Twitter doxxing incident after which she was confronted and threatened. As she shared her experiences of discrimination and intimidation on Twitter, Vijaya Gadde, the company’s head of legal, policy, trust and safety, openly wept. Dalits and another Indian minorities are regularly harassed on, if not forced off, Twitter by right-wing troll armies.

Twitter’s position as a platform for political discourse in India was cemented after Prime Minister Narendra Modi and his Hindu nationalist Bharatiya Janata Party famously used social media during his campaign in the 2014 national elections. Since Mr. Modi came to power, his followers have been conveying positive messages about his government, often using doctored images.

India has also seen an increase in the atrocities against minorities and incidents of religious and caste-based violence. Many blame Mr. Modi’s followers, who have emerged as a majoritarian, casteist troll army for inciting hatred of India’s caste and religious minorities.

While most of the world understands America’s troll culture and its foundations in white supremacy, it is still learning about how caste is the bedrock for India’s online troll ecosystems. Dalits need to be at the table during discussions of platform accountability because our stories carry the urgency of what our people face. Whether in the real or the online world, Dalits refuse to be the canary in the coal mine for caste atrocity any longer.

It was in this fraught context that I designed a series of political posters. One that Ms. Aruna gave to Mr. Dorsey featured a woman protesting and three words: Smash. Brahmanical. Patriarchy. The Brahmins sit at the very top of the caste hierarchy and are longstanding gatekeepers of power. Their voices collectively dominate public debate and opinion in traditional and social media, extending their supremacy beyond traditional Indian institutions. The poster was a piece of Dalit resistance art, an artifact of solidarity and resilience.

After the meeting in New Delhi ended, Mr. Dorsey held my poster while posing with participants for a picture. The photograph was seen as Twitter endorsing our call to end caste and patriarchy.

Mr. Dorsey and his team were relentlessly harassed. He was smeared as a racist and accused of disrupting Indian society in the run-up to the 2019 national elections.

Anna MM Vetticad✔@annavetticad · Nov 18, 2018During Twitter CEO @jack's visit here, he & Twitter's Legal head @vijaya took part in a round table with some of us women journalists, activists, writers & @TwitterIndia's @amritat to discuss the Twitter experience in India. A very insightful, no-words-minced conversation 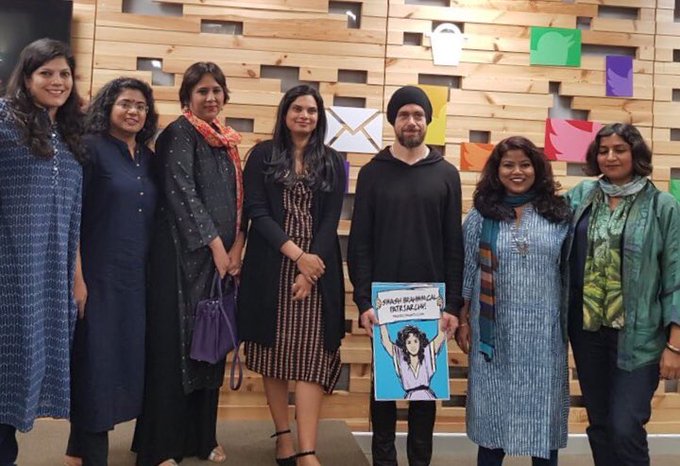 ✔@smittal_ipsDo you realise that this picture has potential of causing communal riots at a time when several States are going to Assembly Elections in India. Even now an apology is not offered. Actually its a fit case for registration of a criminal case for attempt to destablise the nation. 6,37011:40 AM - Nov 20, 2018Twitter Ads info and privacy

5,198 people are talking about thisTwitter Ads info and privacy

Mr. Dorsey has my empathy. He had a fleeting taste of what it is to be a Dalit woman on Twitter. But these attacks remind us of the pervasiveness of the problem that had prompted his New Delhi visit: online safety in India.

India, with almost eight millionactive Twitter users, is the platform’s fastest growing market. An increasing number of these users are Dalits or belong to other religious, cultural and gender minorities. There are over 260 million Dalits in India, and for many, Twitter truly represented a platform where they could speak and be heard while offering an alternative to mainstream Indian media, which has scant Dalit representation.

But India’s entrenched structures of caste privilege and power replicated on Twitter and forced caste-oppressed communities off the platform, traumatizing many in the process.

Twitter executives quickly cowed before the oppressive power of caste. After the intense Brahmin outrage and calls for a boycott, Ms. Gadde apologized for the photograph of Mr. Dorsey with my poster, saying she and her colleagues should have been more thoughtful and, “Twitter strives to be an impartial platform for all.”

Mohandas Pai✔@TVMohandasPai · Nov 19, 2018Replying to @TVMohandasPai.@jack This is the elemental problem with the team representing @twitter in India, & this is what your users here have been saying - it is unbelievable how blind your biases have made you to the ear-shattering hate sponsored by @TwitterIndia. You have institutionalized hatred.

Vijaya Gadde@vijayaI'm very sorry for this. It's not relective of our views. We took a private photo with a gift just given to us - we should have been more thoughtful. Twitter strives to be an impartial platform for all. We failed to do that here & we must do better to serve our customers in India 5212:27 AM - Nov 20, 2018Twitter Ads info and privacy

198 people are talking about thisTwitter Ads info and privacy

The apology translated to an endorsement of deeply problematic power dynamics — an unacceptable position given the platform’s positioning as a free and open space for discussion.

And given the magnitude of caste-based aggression and harassment on Twitter, its blindness to caste in India is alarming. The platform has a responsibility not to simply promote free speech but to also guarantee the freedom of expression and safety of its most vulnerable users. Coordinated attacks on vulnerable voices are shutting them out and turning Twitter into yet another tool of persecution.

In the light of Mr. Dorsey’s encounter with the vitriol on Indian Twitter, I hope he and his colleagues take a step back to assess, reflect and pivot. The platform urgently needs to make corrections to protect minorities in India and elsewhere in the world.

There are immediate, specific measures Twitter could take. It could introduce a formal option to report caste-related abuse and hate speech. It could commission an independent assessment of the human rights risks on the platform, with particular attention to the safety, freedom of expression and privacy and experience of its most vulnerable users, and create ways to mitigate those risks. And it should dedicate resources into investigating India troll networks and the growing cost of disinformation that results from their actions.

Mr. Dorsey and his colleagues also need to engage in broad consultations with governments and civil society groups, especially with representatives from gender, religious and cultural minorities. These difficult conversations will reflect a difficult reality, but they need to happen if Twitter wants to be a platform where marginalized voices can be visible and heard without fear.

As one of the first Dalit women on Twitter, I long for the time when the platform meant community and sharing, not endless casteist abuse, rape and death threats. It is time for executives like Mr. Dorsey to ensure that the trolls do not and will not own the virtual public sphere.

Thenmozhi Soundararajan, a Dalit-American artist and activist, is the founder of Equality Labs, a human rights group fighting caste and religious intolerance.

Get exclusive commentary from Nicholas Kristof and be the first to read his Thursday and Sunday columns.