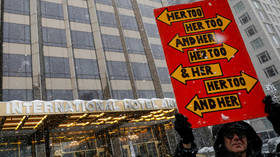 © Reuters / Brendan McDermidA shocking one-in-three United Nations employees report they have been sexually harassed at work over the past two years, according to a first-of-its-kind survey – and the figure is even higher for whole-career harassment.

While the most common types of "harassment" reported were "sexual stories or jokes that were offensive" and "offensive remarks about appearance, body or sexual activities," more serious transgressions were also common, including offensive gestures and touching, as well as unwelcome attempts at conversation about sexual matters.

Two-thirds of the harassers were male. Only a third of the victims said they "took action" following the harassment. The survey was conducted by management consultancy Deloitte in the form of a confidential online questionnaire.

UN Secretary-General Antonio Guterres wrote in a letter to UN staff that the "sobering statistics" provided "evidence of what needs to change" to improve the UN's work environment. While he claimed the alarmingly high figures were similar to other organizations, he said the UN should "lead by example and set the standard."

Just 17 percent of UN staff answered the survey – and Guterres expressed concern that the paucity of responses suggested "an ongoing sense of mistrust, perceptions of inaction and lack of accountability."

Guterres has vowed to enforce a zero-tolerance sexual harassment policy, and the UN launched a 24-hour helpline last February to facilitate reporting, but the organization has endured several high-profile harassment cases recently. Last year, Jan Beagle was promoted to head the UN's task force on sexual harassment while she herself was under investigation for the same offense.

The task force was formed in response to the #MeToo movement, which found vocal supporters among the UN's ranks. One woman described the workplace atmosphere as "'Mad Men' territory," while others shared stories of drunken advances from their superiors, unwanted touching, and dire professional repercussions for those who didn't go along with the harassment or who tried to report it. Men, too, have criticized the UN's handling of harassment cases, claiming that despite its lofty rhetoric, the organization cares more about protecting itself from criticism than justice for victims.

In December 2018, Kingston Rhodes, UN undersecretary-general and chairman of the International Civil Service Commission, resigned just two weeks before his term ended as allegations piled up that he had "created a hostile and 'unhealthy' environment for women who rejected his sexual advances." Despite the "zero-tolerance" policy enacted by Guterres over a year before – and four of the women putting their allegations in writing in a letter sent directly to Guterres, allegations he reportedly deemed "credible" – Rhodes was never punished. His staff reportedly even threw a going-away party for him and asked for contributions from other employees to pay for the celebration.

Michael Sidibe, executive director of UNAIDS, resigned in disgrace and will step down in June after an internal review found he had created "a culture of impunity for abuse of office, bullying and harassment, including sexual harassment" at the body.