Why does the language of journalism fail indigenous people?

A journalist with indigenous roots reflects on the making of We Are Still Here: A Story from Native Alaska. 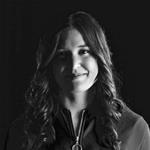 'In my experience, Native culture does not flinch ... It is rooted in an attitude that says 'this is the way it is', not 'this is what I need it to be'' [Showkat Shafi/Al Jazeera

I really want to do this story justice.

It is a mantra I adhered to long before I became a journalist; my parents travelled great distances to build a life together and I've always wanted to pull my weight in that happy ending.

It is also the mantra I carried with me this summer as I left my home in Qatar for the 10,000km journey to Alaska, as I boarded the nine-seater plane at the tiny air taxi office in Anchorage and as we flew over a snowy mountain range and rolling tundra.

I was returning to Iliamna, my mother's remote Alaskan village, which lies on the waters of the largest sockeye salmon run in the world. My mother is an Alaska Native - a member of the Dena'ina ethnic-language group.

My father is a Qatari. Every summer, my parents, sister and I would return to Iliamna to visit family and help with the salmon run - assisting with catching, smoking, brining and canning the salmon that is so central to the community's subsistence lifestyle.

I was working on a film about the pressures facing this community - a community I feel both a part of and removed from. Despite knowing many people there since childhood, I was worried that people wouldn't want to talk on camera. I knew I would feel apologetic and hurt if they didn't, despite trying to reason with myself. For me it wasn't about securing or losing an interview; it was about confirming or rejecting that I had a place in the story.

Telling a personal story can be scary because you are admitting that you don't know everything about your own language, culture and family. You have to ask hard questions. Were you ignorant about something because you didn't care enough to learn it? Were you too embarrassed to ask? Sometimes it's hard to tell the difference between apathy and shame; you are either motionless from lack of care or paralysed by too much of it.

Despite months of planning and phone calls back and forth, it was only as we sat down for our first interview - with an elder in his house on a small cliff overlooking Lake Iliamna - that I truly believed the film was going to happen and that people would actually talk to us.

The interview began as most would in the coming days: quietly. His wife fidgeted nervously outside the camera frame. I assumed a casual slouch on the sofa, more to calm my own nerves than his. He was a distant relative and our paths hadn't crossed before because we both lived outside the village.

Alaska: When the Water Took the Land

Like most people in the community, he was a good storyteller and his cadence gave the world rhythm. He offered me another thread that tied me to this place and I marvelled. Then the door burst open - a team of neighbours had come to mow his lawn - our interview would have to resume another day.

There were logistical challenges to filming in Iliamna; time works differently in a community where the sun sets at midnight and daily activities are dictated by the weather.

It is hard to track down interviews somewhere where there are few roads and people can be anywhere from "over the road" to "somewhere upriver". We were also visiting during the busiest time of the year when residents are balancing jobs with the labour-intensive process of catching and storing salmon for the year. 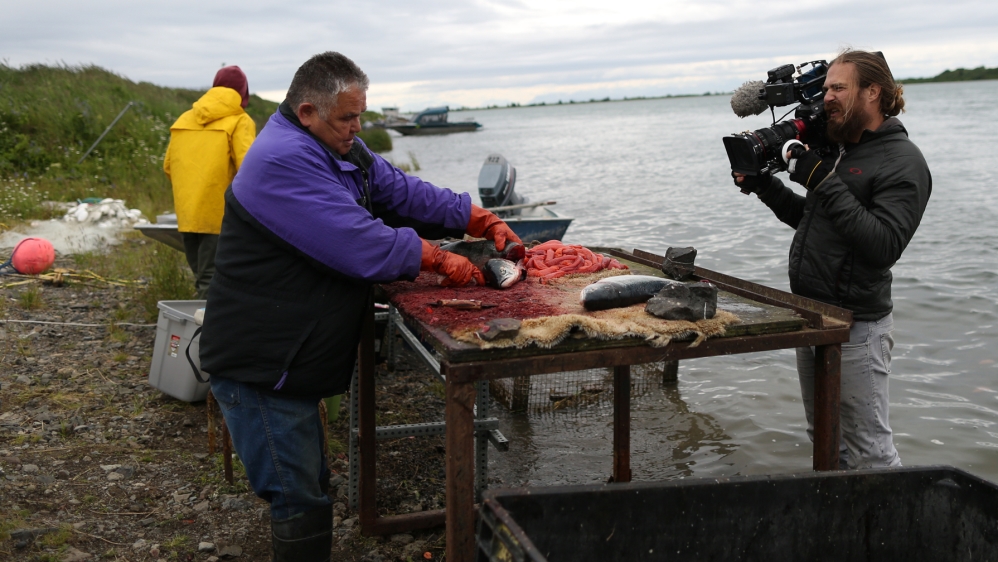 During the summer, residents are balancing jobs with the labour-intensive process of catching and storing salmon for the year [Showkat Shafi/Al Jazeera]

On a personal level, I was worried that I would get it wrong; that I would ask the wrong questions, at the wrong time or in the wrong way. I feel this way about any story I work on - I think being self-critical is essential for any journalist - but when you are of mixed heritage you feel indebted to a community for giving all of itself to you when you feel like you only ever give half of yourself to it.

So when an opportunity like this one comes along, you want to do everything possible to get it right.

I assume most TV crews that pass through the Iliamna Lake area shoot nature documentaries or focus on the controversial Pebble mining deposit nearby - or are trying to track down the mythological Iliamna Lake Monster. So, I really wanted this story to be about the community and for the community.

With this came the added pressure of history. Media has rarely served Native communities well, and this has fostered a distrust towards journalists.

Will the real Pocahontas please stand up?

This distrust wasn't overt in Iliamna - I think that was partly because of my family's connection to the community but also because it serves as a regional hub and is in relatively close proximity - a 50-minute flight - to the city of Anchorage.

There were some exceptions; one family friend yelled me and the rest of the crew out of his workshop before we could open our mouths. He later told me that there were no hard feelings but that TV crews always twisted words. I couldn't disagree.

I suspect distrust is even greater in those indigenous communities that subsist off of marine mammals. They were deeply impacted by animal welfare campaigns attacking whaling and seal hunting in the 1970s and the cultural and economic devastation of those campaigns - from food shortages to sky-high suicide rates - still run deep.

I had previously reached out to a Native organisation in the Bering Strait region, which is located in northwest Alaska and largely made up of whaling and seal-hunting communities, and was met with defensive anger.

The representative questioned my background, my company and my motives. After some discussion, she explained that they wanted to keep their way of life to themselves because people so often misunderstand it. 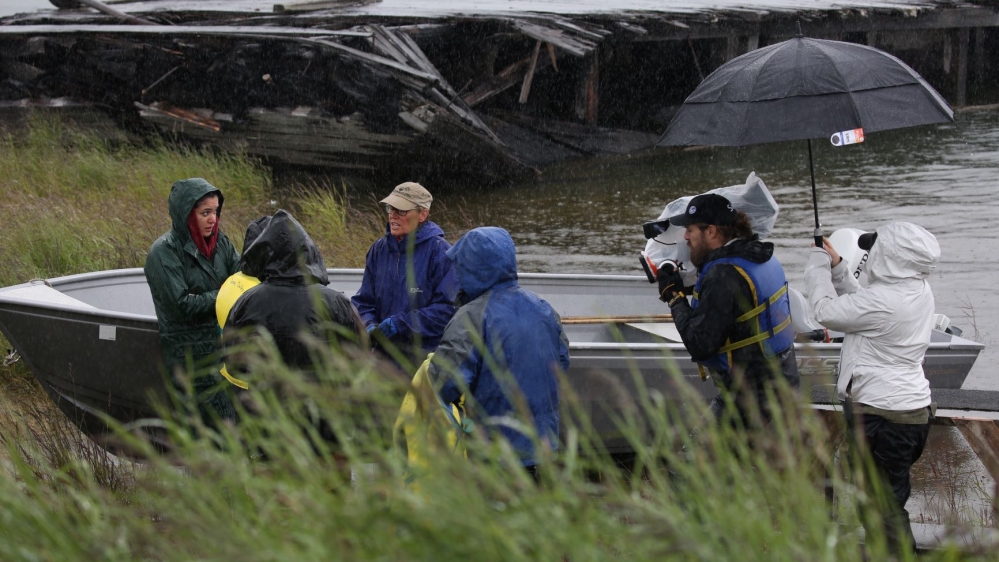 She was gracious, considering what she knew was at stake; Native people have long been misrepresented and penalised for a way of life that is portrayed as primaeval, cruel or embarrassing - rather than as something deeply felt and timeless in its adaptability.

She reminded me of an incident last year in which a 16-year-old boy from Gambell, a small Siberian Yup'ik community located on St Lawrence Island in the Bering Sea, faced online hate - including death threats - after striking a whale to help feed his community.

The hundreds of messages he received came after a prominent environmental activist shared an article about him in a disparaging social media post.

Indigenous people know that their representation has failed before they've even begun speaking, because the medium through which they are represented - a hard, sharp language rooted in ideas rather than feeling - has rarely granted them territory.

The language that media uses today does not heed silence and self-interpretation. It does not respect the power of conjured stories. It does not favour the collective over the individual. And this does not fit with indigenous perspectives.

But we have much to learn from those perspectives. In my experience, Native culture does not flinch. It does not try to separate itself from its surroundings because that makes no sense when you rely on your surroundings to support your family and feel like yourself.

It is rooted in an attitude that says "this is the way it is", not "this is what I need it to be". It has the ability to innovate out of necessity, not greed. It offers a different kind of normal and we as consumers, creators and polluters are in dire need of a new normal.

This was my first film project, and collaborating with director Ciara Lacy and her team was exciting for me because suddenly we could speak with sound and images.

In writing, tone can be a blind spot; how a person says or feels something isn't always self-evident in a direct quote, and you often have to work at making it feel right by drawing out the silent spaces of a conversation. But with film, you can say nothing and a scene will speak for itself. It is so powerful.

I found comfort and solidarity working with Ciara and composer Kayla Briet, who are also mixed-heritage indigenous women. Their work teaches me more about celebrating the roots I have, no matter how big or small, and owning them as part of my identity. 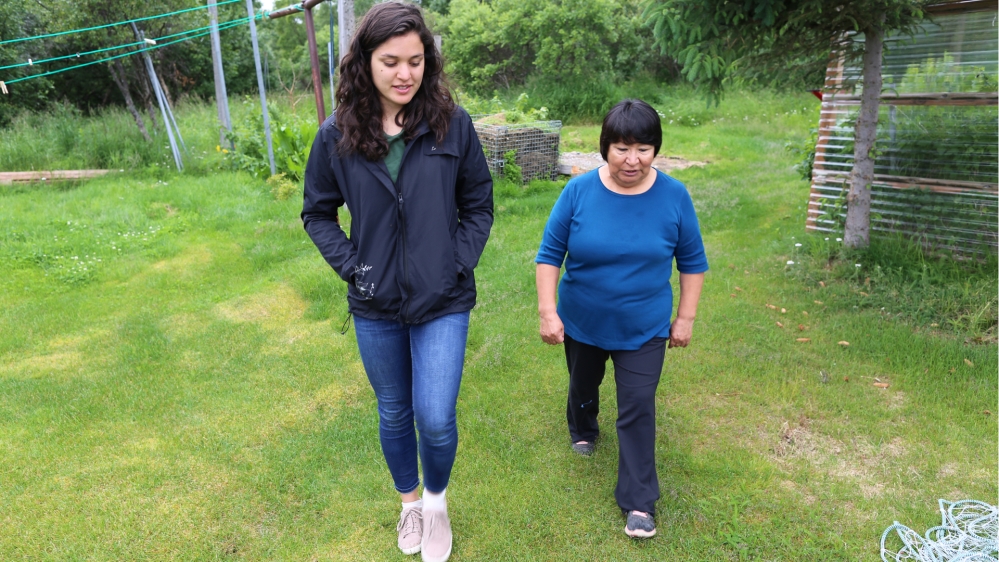 'In my experience, Native culture does not flinch ... It is rooted in an attitude that says 'this is the way it is', not 'this is what I need it to be'' [Showkat Shafi/Al Jazeera]

I wonder if it is being of mixed heritage that makes me feel more connected to my Alaskan community, because the perspectives of indigenous people today are inevitably those of mixed heritages; after colonisation we were all straddling two worlds, all putting effort into learning our own cultures and languages - and often feeling guilty about it.

But I think this is where we find a lot of strength - and where everyone can find strength. When we move between worlds, we are positioned to tell new stories. And when we tell new stories, we invent new ways of telling them.

Finding a new language can be a difficult and unsupported task, but it means we can then approach stories with the nuance of our lived experiences. And out of that, we find new truth.