Youth climate strikers: 'We are going to change the fate of humanity'

Exclusive: Students issue an open letter ahead of global day of action on 15 March, when young people are expected to strike across 50 nations 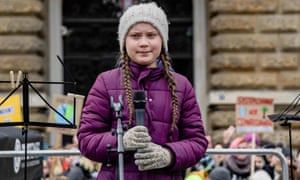 The students striking from schools around the world to demand action on climate change have issued an uncompromising open letter stating: “We are going to change the fate of humanity, whether you like it or not.”

The letter, published by the Guardian, says: “United we will rise on 15 March and many times after until we see climate justice. We demand the world’s decision makers take responsibility and solve this crisis. You have failed us in the past. [But] the youth of this world has started to move and we will not rest again.”

The Youth Strikes for Climate movement is not centrally organised, so keeping track of the fast growing number of strikes is difficult, but many are registering on FridaysForFuture.org. So far, there are almost 500 events listed to take place on 15 March across 51 countries, making it the biggest strike day so far. Students plan to skip school across Western Europe, from the US to Brazil and Chile, and from Australia to Iran, India and Japan.

“For people under 18 in most countries, the only democratic right we have is to demonstrate. We don’t have representation,” said Jonas Kampus, a 17 year old student activist, from near Zurich, Switzerland. “To study for a future that will not exist, that does not make sense.” 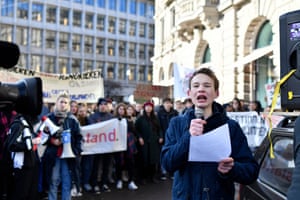 The letter says: “We are the voiceless future of humanity ... We will not accept a life in fear and devastation. We have the right to live our dreams and hopes.” Kampus helped initiate the letter, which was created collectively via a global coordination group numbering about 150 students, including the first youth climate striker, Sweden’s Greta Thunberg.

The strikes have attracted some criticism and Kampus said: “We wanted to define for ourselves why we are striking.” Another member of the coordination group, Anna Taylor, 17, from north London, UK, said: “The importance of the letter is it shows this is now an international movement.

Taylor said: “The rapid growth of the movement is showing how important it is and how much young people care. It is vital for our future.” Janine O’Keefe, from FridaysForFuture.org, said: “I’ll be very happy with over 100,000 students striking on 15 March. But I think we might reach even beyond 500,000 students.”

Thunberg, now 16 years old and who began the strikes with a solo protest beginning last August, is currently on holiday from school. She was one of about 3,000 student demonstrators in Antwerp, Belgium on Thursday, and joined protesters in Hamburg on Friday morning. 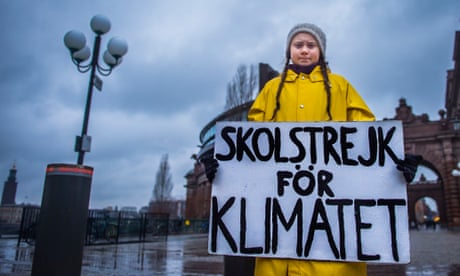 In recent days, she has sharply rejected criticism of the strikes from educational authorities, telling the Hong Kong Education Bureau: “We fight for our future. It doesn’t help if we have to fight the adults too.” She also told a critical Australian state education education minister his words “belong in a museum”.

The strikes have been supported by Christiana Figueres, the UN’s climate chief when the Paris deal to fight global warming was signed in 2015. She said: “It’s time to heed the deeply moving voice of youth. The Paris Agreement was a step in the right direction, but it’s timely implementation is key.” Michael Liebreich, a clean energy expert, said: “Anyone who thinks [the strikes] will fizzle out any time soon has forgotten what it is to be young.”

In the UK, about Taylor said more than 10,000 students went on strike on 15 February: “I’m anticipating at least double that on 15 March.”

The strikes would not end, Taylor said, until “environmental protection is put as politicians’ top priority, over everything else. Young people are cooperating now, but governments are not cooperating anywhere near as much as they should”. She said students were contacting her from new countries every day, including Estonia, Iceland and Uganda in recent days.

Kampus, who was invited to meet the Swiss environment minister, Simonetta Sommaruga, on Wednesday, said: “The strikes will stop when there is a clear outline from politicians on how to solve this crisis and a pathway to get there. I could be doing so many other things. But I don’t have time as we have to solve this crisis. My dream is to have a life in peace.”

We made a choice…

… and we want to tell you about it. We made a choice which means our journalism now reaches record numbers around the world and more than a million people have supported our reporting. We continue to face financial challenges but, unlike many news organisations, we have chosen not to put up a paywall. We want our journalism to remain accessible to all, regardless of where they live or what they can afford.

This is The Guardian’s choice: a model for open, independent journalism – free for those who can’t afford it, supported by those who can. We depend on contributions from our readers. Will you support our choice?

Readers’ support powers our work, safeguarding our essential editorial independence. This means the responsibility of protecting independent journalism is shared, enabling us all to feel empowered to bring about real change in the world. Your support gives Guardian journalists the time, space and freedom to report with tenacity and rigour, to shed light where others won’t. It emboldens us to challenge authority and question the status quo. And by keeping all of our journalism free and open to all, we can foster inclusivity, diversity, make space for debate, inspire conversation – so more people have access to accurate information with integrity at its heart.

Guardian journalism is rooted in facts with a progressive perspective on the world. We are editorially independent, meaning we set our own agenda. Our journalism is free from commercial bias and not influenced by billionaire owners, politicians or shareholders. No one steers our opinion. At a time when there are so few sources of information you can really trust, this is vital as it enables us to give a voice to those less heard, challenge the powerful and hold them to account. Your support means we can keep investigating and exploring the critical issues of our time.

Our model allows people to support us in a way that works for them. Every time a reader like you makes a contribution to The Guardian, no matter how big or small, it goes directly into funding our journalism. But we need to build on this support for the years ahead. Suppo